We had an almost naked party at our house the other day.  That got your attention, didn’t it?  Princess Nagger was excited to get this in the mail: 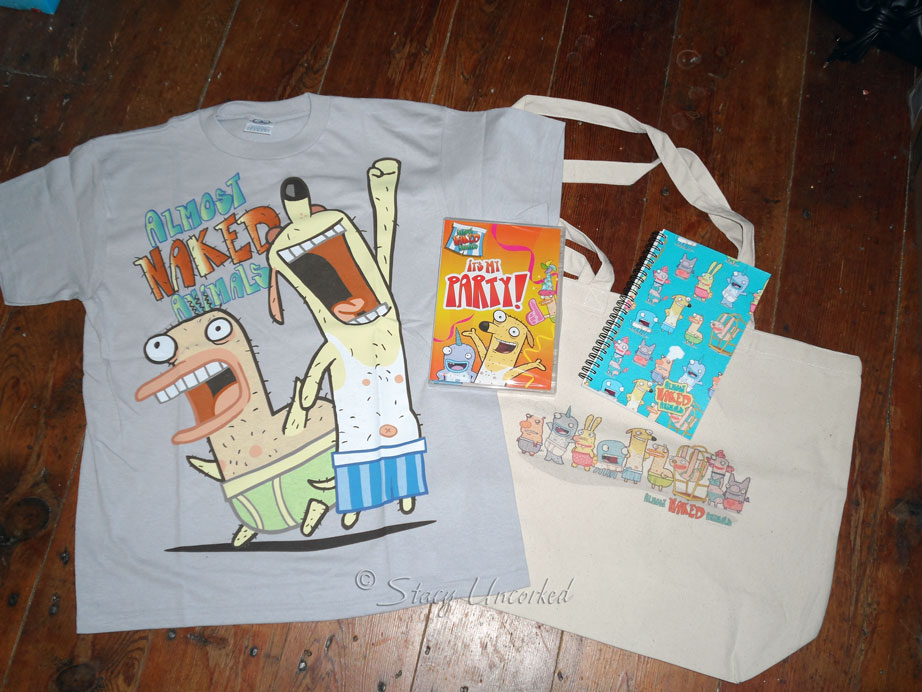 Princess Nagger was thrilled with the ‘welcome package’ she received – with a tote bag, t-shirt, notebook and a copy of the DVD to be released later this month.  She’s always loved this show – she likes quirky shows like this, so it’s right up her alley.  She and I made an afternoon of mom-daughter bonding time by watching the DVD together (that you’ll be able to get on September 25th).

She was laughing through the whole thing.  I wasn’t sure if it would be appropriate for Little Dude, since he’s only 4 and it’s geared towards kids 6-11 years old, but after watching it, I think he’ll enjoy it, too.

Almost Naked Animalsis based on the quirky designs of Noah Z. Jones (who also designed Fish Hooks for the Disney Channel) and is a irreverent, fast-paced comedy featuring animals in their underwear (which Princess Nagger always chortles about, emphasizing “They’re in their underwear!”   The setting is a beachfront hotel called The Banana Cabana, and the leader of the pack, so to speak, is Howie the dog, the hospitality-challenged manager.

Howie is surrounded by friends: Octo a blue octopus, the desk clerk. He is a jittery octopus who “inks” the bed and his ink comes out in portraits of people he knows. He also “inks” when he’s scared. Bunny, a short-tempered yellow rabbit and activity planner with a sugary personality (subject to mood swings).  Duck, an eccentric peach-colored duck who does every random job and tries anything to get it done. Piggy, a pale-pink pig who is a ninja-trained master chef with a Bulgarian accent. Narwhal, a periwinkle medium-sized, egotistical toothed whale that loves to sing. Sloth, the peach-colored sloth and the bellhop of the Banana Cabana.

Howie’s older sister Poodle, is a pink poodle who owns a rival hotel called the Chateau Chattoo, and often tries to sabotage her brother’s hotel.  She is accompanied by Batty, a fun-loving dark lavender bat and is Poodle’s henchman, even though he is much nicer and doesn’t really take pleasure in sabotaging Howie’s hotel. But he is very loyal to Poodle. Unlike Poodle, he is more of a friend to Howie and the Banana Cabana group. 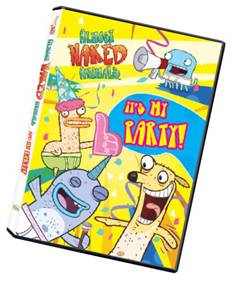 is coming to DVD on September 25th.  In addition to the DVD release, even more fun will be happening:

What quirky or off-beat shows do you or your kids like to watch?

.
Note: I received a Banana Cabana Welcome Package and Almost Naked Animals Volume 1 DVD for review as part of a promotional campaign with Child’s Play Communications. No monetary compensation has been received implied or otherwise.  The opinions are my own (and Princess Nagger’s) and not influenced by outside sources. See my Disclosure Policy here.

One thought on “Almost Naked Animals: It’s My Party DVD”