A new school year already – today is Day 3.  I know it’s still August – that’s just how they do things here in Small Town America.  Still haven’t figured out the why yet, since it makes more sense to start the Tuesday after Labor Day since Labor Day Weekend is the wrap-up to summer.  At least in my mind it is.

So far so good – a nice change of pace from the last two years where it was a major feat to get Princess Nagger out of bed to get her fed and ready for the bus.  She loves her teacher and has a few friends in class this year that she had gotten close to in Kindergarten and First Grade, but they ended up in other classes the subsequent years.

While I understand the school’s thought process to shuffle the kids in different classrooms each year to allow them expanded socialization opportunities, there is still something to be said for consistency and familiarity.

This will be her final year at that school, since the Elementary School is K-4.  Next year she would be moving to the Middle School where they only have 5th and 6th grade.  But that’s only if our ducks don’t line up in a row and if we haven’t moved back to the Seattle area by then.  Little Dude has a late birthday too, and has to wait until next year to start Kindergarten, so moving before that happens makes more sense.

We never did send Princess Nagger to Preschool – which certainly hasn’t stifled her socialization skills because she’s quite the social butterfly and has a gaggle of friends.  And, since the hubby and I had to revamp our budget since we were no longer going to be a double-income household, paying for Preschool just didn’t fit in.  Not to mention it’s only offered 2 or 3 days a week, and only 2-1/2 hours each of those days at that.

We’d either have the additional cost of daycare (since my family is 3000 miles away, so no free babysitting for me) and figure out how to leave work to do the exchange – or work part-time to hopefully coincide with the odd hours – which was an impossibility. I’d pretty much be working to pay for Preschool and gas to and from work and all the extra shuttling.  And be stressed out and overworked.  Not a good look for me.

When asked if we were going to send Princess Nagger to Preschool – and when she started Kindergarten, asked what Preschool she went to – we got weird looks from people who lectured about the benefits of Preschool for a child when we said we didn’t send her to any.  Without them actually saying so outright, we were treated as if we were bad parents for not sending our child to Preschool. 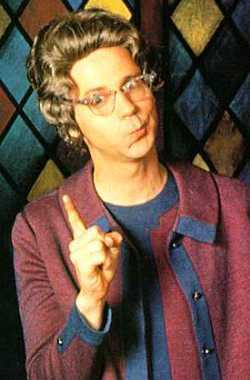 Really?  So me choosing to teach my own daughter whatever she’d learn in Preschool wasn’t good enough?

I beg to differ.

She has a late birthday, so she had to wait until the following year to start, making her (at that time) the ‘oldest’ kid in her class since she was the first to turn 6 a couple of months into the start of the school year.  During the time leading up to when she’d start Kindergarten, I had no idea what she should know before starting, so I taught her everything.

So much so, that the things she was supposed to learn in Kindergarten she already knew.  The kid could count to 300 forwards and backwards, could write her name mostly clear in all caps, could already read basic reading books, knew all her colors, numbers, the alphabet – and she had no trouble assimilating into the class on a socialization scale.

She even got off the bus at a wrong stop a few days into her new school adventure, simply because some kids on the bus invited her over to play.  She’s a literal girl, so she thought they meant right then, and followed them off the bus.  The bus driver had to turn around and go back to get her after arriving at our bus stop with no Princess Nagger.

I think my heart stopped beating for a few minutes that day.

Not sending her to Preschool has obviously not been detrimental to her, because she easily could skip into the next grade level if that was something they did in this school district like they did when I was in school.  I have a ‘late birthday’, too – which meant I had to wait until the following fall after turning 5 to start Kindergarten, but only went for 2 weeks before they moved me up into First Grade.  That’s another story for another day since this one is turning out longer than anticipated.

Sure, she’s in the Gifted Program, but that can only keep her from boredom on a limited capacity.  She’s reading at 8th grade level, spelling at 7th grade level, and doing math at 6th grade level.  She’s currently in 4th Grade.  These are all the reasons she did not like school the last two years – because she was bored.  Luckily at the end of the school year last year, the Gifted Teacher assured us they’ll be making sure there is no boredom this year, so hopefully the enthusiasm she’s showing just from these first few days of school will continue on until next spring.

Meanwhile, now that Little Dude is on the scene, we’re right back to getting lectures about the benefits of Preschool for him – and disdain for the fact that we are not sending him to Preschool.  I can just do a repeat performance of four or five years ago.  Though some days I wish we had enrolled him, because he is the polar opposite of Princess Nagger in the Klingon mode – and a lot more hyperactive.

Part of the problem (as was the case for Princess Nagger, as well) in addition to the ridiculous monthly cost, any viable Preschool is at minimum a half-hour drive to get there – so if it’s two or three days a week for only a couple of hours, it would put a big crimp in my schedule to shuttle him back and forth.  You know, because it’s all about me.

His socialization skills aren’t suffering – in fact, we have to constantly remind him not to talk to strangers, because he says “Hi” to everybody that passes by when we’re out shopping.  And seems hurt when they don’t say “Hi” back.  He’s a smart little guy, but he does have trouble following directions – something he could learn at Preschool, but something I could also teach him.  As long as I can manage to hang on to my sanity, that is.

For now, we’ll brush off the cynicism and judgmental attitudes and do what we do best – raise our kids the best way we know how, and hope and pray that they’ll eventually grow into amazing adults and be contributing members of society.  Without judgment or cynicism towards others.

60 thoughts on “Getting all Judgy about Preschool”