I consider myself very lucky – when my sisters and my friends were all suffering as teenagers with acne, I skated through my teens with nary a zit in sight.  Sure, after I hit puberty I’d get the occasional annoying pimple, and being a teenager, you do everything in your power to make it go away, thereby making it that much worse.

In fact, I’m embarrassed to admit I tried unsuccessfully to get rid of one on my cheek – instead I made it worse.  It was so bad I ended up wearing a band-aid over it going to school.  One of the worst days of my life.  You know, in teen mode.

Since 40 is apparently the new 20, once a month like clockwork (ahem – you know why, right?) I’ll have a break-out, especially on my chin.  I’m sure resting my chin on my hand while blog-hopping probably doesn’t help matters any.  I’m clueless how to get rid of acne , since I never had to deal with it prominently.

I’ve tried various products hoping to keep it at bay during their once-a-month occurrence, but never thought of using a laser acne treatment because I had no idea they could be done at home – I always thought you’d have to go to a dermatologist like my friends did.

I’m very excited to announce that I have the honor of having been chosen to take the Tria Blue Light for a test run: 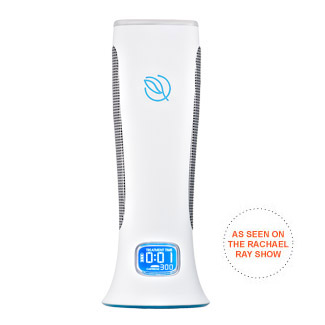 Part of the honor of being a Tria blogger, I will use the Tria Blue Light for 4-5 weeks so I can report back to you with any and all results I have.  According to the Tria site, consistent daily use of the Tria Blue Light should help me achieve 70% acne reduction in just two weeks.  The arrival of the Tria was perfect timing, at that time of the month.  So it will really be going through its paces right off the bat.

I’m sure you’re wondering what exactly is blue light therapy? Dermatologists have been using blue light since early 2002 to help clear clients acne breakouts quickly and effectively by eliminating the bacteria that cause acne. Blue light treatment is a non-UV light therapy, which is gentle on skin and does not cause long-term harmful health effects. Tria lets you use the dermatologist treatment in the comfort of your own home.  How cool is that?

What’s even cooler is using the Tria is absolutely easy. Wash and cleanse your face, taking sure to remove all traces of makeup and sunscreen. Then simply glide the tip of the Tria Skin Perfecting Blue Light over your face for 5 minutes once a day. (For convenience, total treatment time can also be split and used for 2½ minutes in the morning and then 2½ minutes in the evening.)

The machine will beep at the 2½ minute mark and then shut off automatically after 5 minutes. Then nourish your skin with a lotion packed with antioxidants.  For someone like me who doesn’t have time for a ‘routine’, this I can definitely make time for.

Stay tuned – hopefully in a few weeks I’ll be able to rave about my amazing clear complexion!

How do you battle the breakouts?

I wrote this review while participating in a campaign by Mom Central Consulting on behalf of Tria and received a Tria Skin Perfecting Blue Light product sample to facilitate my review. All opinions are mine and not influenced by outside sources. See my Disclosure Policy here.