Happy May Day…  Or whatever salutation is appropriate for this first day of May.  When we were kids, we used to make paper cone vases out of construction paper and fill them with flowers (from my mother’s garden, naturally) then leave them in various neighbors front doorknobs, ring the bell and run away.  Does anyone do that anymore, or is that another thing of the past?

Speaking of May, you know that chant “April Showers bring May flowers” – I guess this year it’s sort of on a delay since we didn’t get much rain in April, as obvious by the August heat we had instead.  I guess we’re kicking off the week pretending it’s a combination of April and May based on what’s coming up: 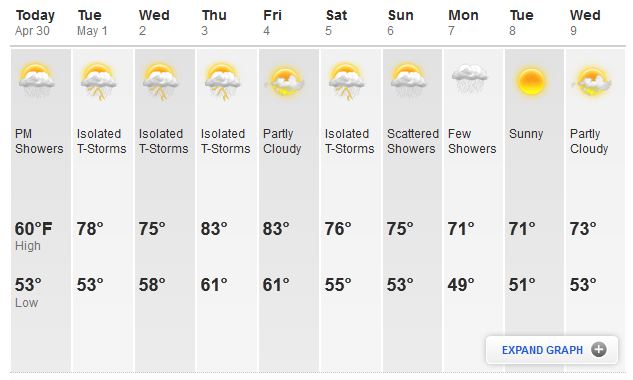 Personally I love a good thunderstorm – it’s like getting our own personal light show.  The hubby and I will even sit out on the porch and watch the action.  I know, we were made for each other since we’re equally crazy.

Speaking of crazy, we’re planning a road trip to Seattle in June.  2 kids, 2 dogs, and 2 insane adults for 2 weeks.  It’s going to be an adventure.  We’re planning to alternate the route there and back – the Northern route and the Southern route.  Any suggestions on what we should stop to see along the way between Pennsylvania and Washington State?  I’m plotting our course now and figure I’ll throw in some touristy stuff to keep it interesting and fun.

Speaking of fun, Sunday night’s episode of GCB was extra hilarious when the women decided to prove the men wrong when the men declared the BBQ Invitational to be “no girls allowed.”  They formed their own team and called themselves “Spicy Racks” (a play on words, obviously), complete with matching T-shirts: 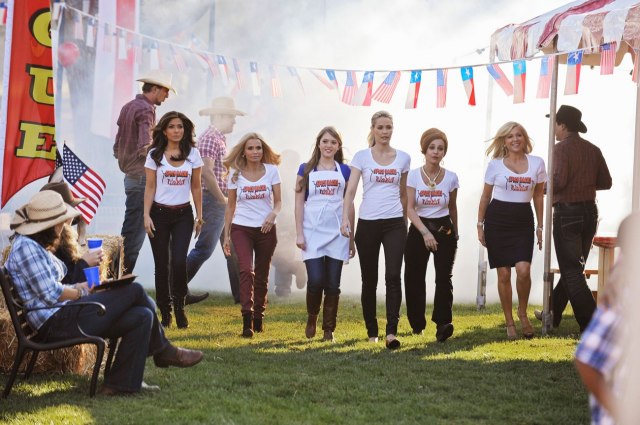 The women won, of course.  This was the next-to-the-last episode for their freshman season – I for one am hoping this show will be renewed for next year.

That’s enough mediocre randomness for this week – feel free to link up and hop around to all the other awesome randomizers – they’re always so entertaining. Thank you all again for keeping the random alive. I couldn’t do it without you. And to my Talk To Me Tuesday friends, you’re welcome to link up, too – that way I’ll be sure not to forget to stop by and scope you out. You know what I mean.

35 thoughts on “May Day Weather and Spicy Racks”