Hard to believe that it’s already the last Friday of May.  Summer is right around the corner – usually Memorial Day weekend seems to be the kickoff to that, even though the official first day of summer isn’t until June 20th.  I’m OK with it starting now, except for the heat and humidity already running rampant, which has already been happening this year.

Mother Nature is not my friend.

It appears that for this holiday weekend Mother Nature will be combining spring and summer weather together in one felled swoop.  Nighttime lows in the upper 60’s (which usually means low 70’s) and daytime highs in the upper 80’s (which means low 90’s) interspersed with scattered rain and thunder storms.  And the humidity – oh the humidity – sitting at 70-95%.

It makes those last-minute freeze warnings at night just last month seem like a distant memory.  And also means that in between the rain and/or thunder storms, we’ll finally be able to successfully do some planting.

If we don’t wither from the stifling humidity while we’re at it.

It also makes me homesick for Washington State – Memorial Day was always the first camping weekend to kick off summer, even if it was a rainy one to start.  In spite of the running joke that it always rains in Seattle, when it does get nice and hot, there isn’t the humidity to contend with.  Give me 110 degrees of dry heat (like a visit to Arizona did) and you won’t hear me complaining.

That phrase “It’s not the heat, it’s the humidity” is something I’ve found myself saying often during the summer months since moving to PA – the oppressive humidity tends to make you spend less time outside since every time you try to draw in oxygen, you feel like you’re being stifled.  Especially when the humidity is literally so thick it looks like fog: 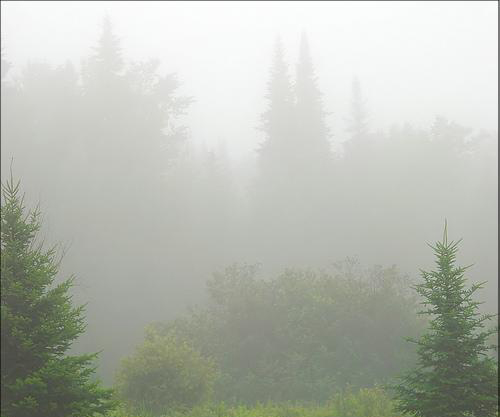 I’m not a lover of heat – you can only take so many clothes off – and that, my friends, would be a very scary prospect.

Does it get humid where you live? How’s your weather shaping up for this weekend?