Here we are, the Tuesday after Easter.  How many of you have imbibed in way too much sugar making sure your young ones didn’t overdose on the sweet stuff? Princess Nagger was generous with handouts this weekend – maybe too generous.  I’m waiting for the crash after this major sugar buzz dies down.

I was looking back trying to figure out when I started the Random Tuesday Thoughts Rebel when our original fearless leader went on hiatus, and realized it has now been over a year since my random buddy Keely of the Un-Mom ditched the randomness since real life was taking over (as it should) like her new job, home life, and the Roller Derby.  After a year and then some of hiatus, it appears she has no intention of taking the reins back, sad as it is, and many of you have insisted I wear the crown permanently.  So I guess I will.  In fact, I made new buttons this weekend – one for my wino friends:

Like the shiny crown?  Thanks, Harriet, for suggesting it.  I wanted to pay tribute to the one who started all the Random on Tuesdays – so I decided to keep her widely recognized fugly button incorporated as we continue to press on and keep Tuesdays as random as possible.

I started participating in Random Tuesday Thoughts (when my blog was still named Stacy’s Random Thoughts) and stumbled across Keely’s hilarious blog while doing a Google search on ‘random’.  I was hooked from the get-go.  It’s a bummer she hasn’t been able to keep it going, but thank you to all you regulars (and irregulars) for keeping the Random alive each week.

Now on to the randomness du joir…

Easter was a success – at least as far as the kidlets are concerned.  They were quite happy the Easter Bunny spoiled them rotten.  In other words, I kinda sorta went a little overboard with the purchases of goodies this year.  Hopefully by next year they’ll forget how much candy and toys they got this year since more than likely it won’t be as – ahem – overboard as this year: 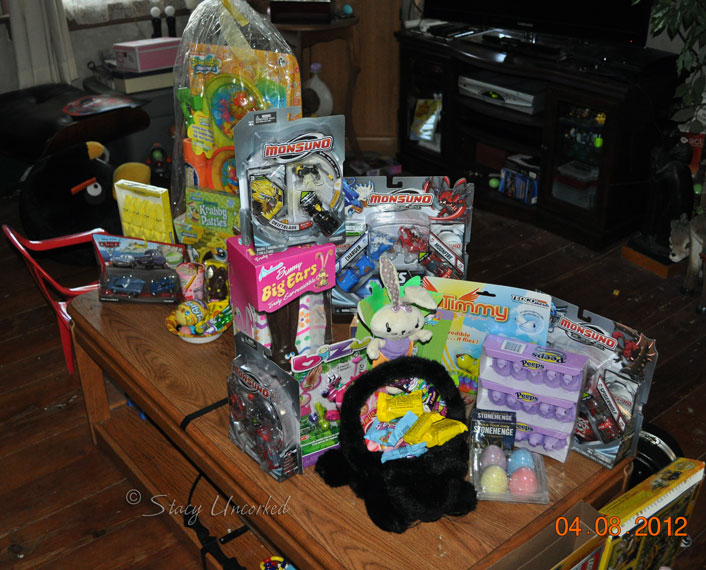 I have a tendency to pick stuff up early then forget what I got after I stash it, then end up buying more because I forgot what I bought before and then find them just in time.  Or not.  Next year I’m going to be more organized, so the loot will be half of what they got this year.  Maybe my New Year Resolution for next year should be No More Blonde Moments.  Riiiiiiight.

Remember Princess Nagger was hoping the Easter Bunny would bring her a Scourge (from the Warrior Cats book series) basket and how I found the black cat plush basket that looked more like a black bear?  I got blue cat eyes to swap them out – and I’m here to tell you, that plush basket is made extremely well – so well that it took me over two hours to swap out the eyes.  But what a difference: 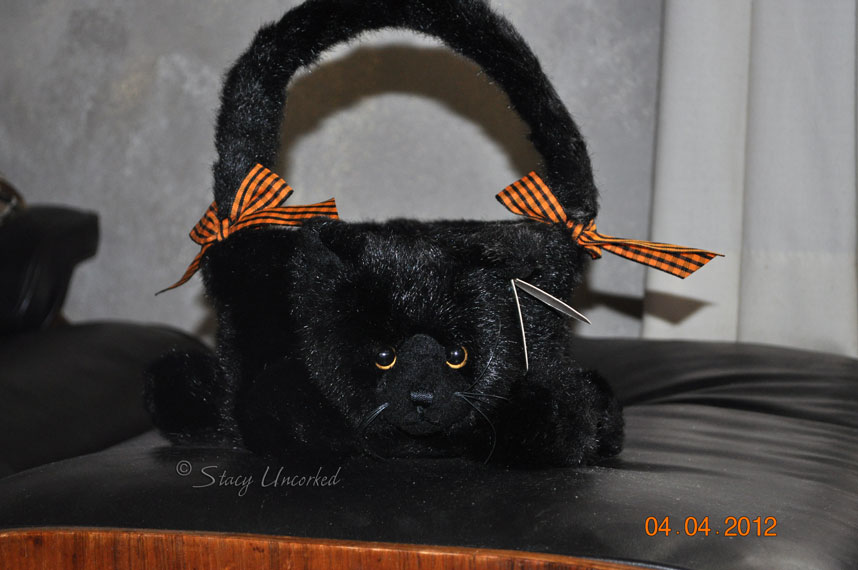 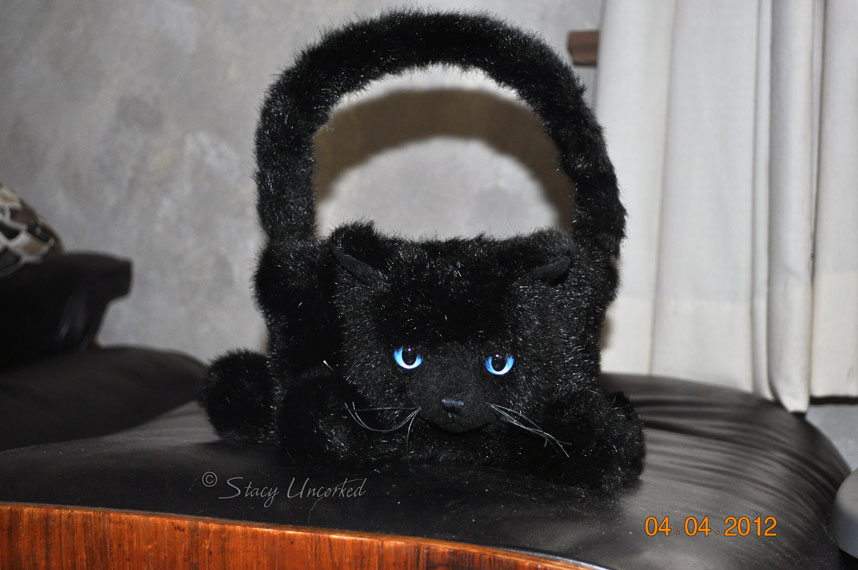 Now it looks like a black cat, right?  Definitely an improvement.  I was so happy with my handiwork that I forgot one major detail – making one paw white.  Here’s the brief conversation about that on Easter morning:

Me:  “Isn’t it cool that the Easter Bunny found you a Scourge basket?”

PN:  “But it is cool – the Easter Bunny probably couldn’t find an actual Scourge.”

Me:  “That’s true, he probably didn’t get enough requests for a Scourge basket to change up his production lines.”

PN:  “Yeah, the Easter Bunny probably isn’t very familiar with Warrior Cats.  I could teach him.”

First I messed up her Scourge costume by painting the wrong paw white, then I completely forgot to make any paw white with her Easter basket.  At least later she mentioned we could make the basket into an actual Scourge by bleaching out one paw – so I’ll be doing something soon.  Very soon.

Little Dude had his first official dentist appointment yesterday – no cavities, and he was the model patient the entire time he was in the dentist chair he was so excited to finally get to sit in. 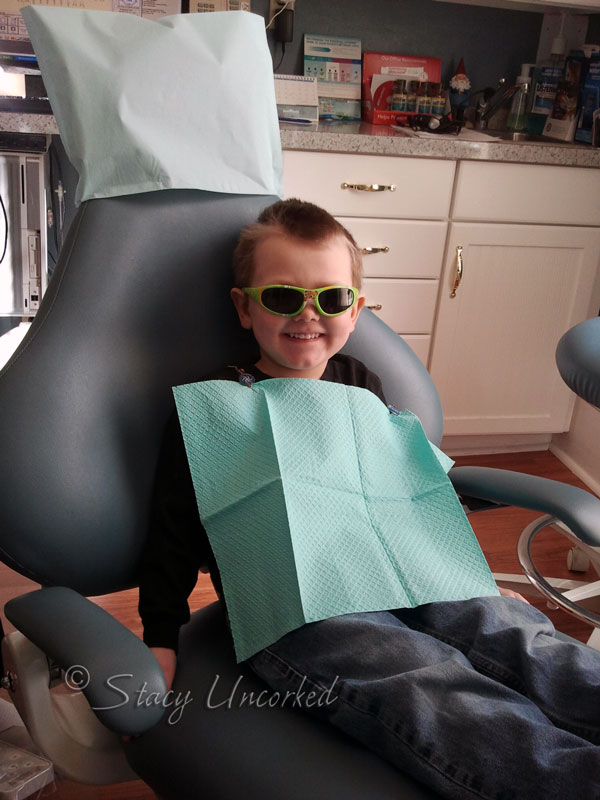 You would have thought he was royalty sitting on a throne he was so regal during his teeth cleaning.  He even had no trouble at all when they took x-rays of his teeth – unlike Princess Nagger who sounds like a banshee in distress every single time.  Maybe she’ll learn from him for her next visit.  Maybe.

That’s it for this week – feel free to link up and hop around to all the other awesome randomizers – they’re always so entertaining.  Thank you all again for keeping the random alive.  I couldn’t do it without you.