I’ve been lucky.  In all the years since I obtained my driver’s license, I’ve only been in a couple of minor accidents.  Not long after I’d gotten my license and was tasked with driving my brother and I to and from school in my parent’s Toyota station wagon (if that doesn’t scream “cool” I don’t know what does) I was taking a free right-hand turn onto a 4-lane road, and doing as I was instructed in driving school – staying in the right lane.

Except the lady in the big black Cadillac coming from the left didn’t do what she was supposed to do by staying in the left lane and switched to the right lane just as I was taking my turn into that lane.  You guessed it; she caught the front quarter panel of my parents’ car and crumpled it, along with putting a nice dent in her rear quarter panel (complete with smudges of sky blue paint transferred from my parents’ car).

Luckily there was a gas station right there on the corner, so we both pulled over, and this perfectly coiffed lady in a suit sporting over-sized sunglasses and perfectly manicured long red nails starts screeching at me about being a stupid teenage driver and ruining her car.

The police were called, and the officer was more sympathetic towards me because of the lady’s venomous tongue and indignant attitude as he quietly informed me that technically I was at fault because I hadn’t yielded the right-of-way.

I think he felt sorry for me, though, because after the mean lady left he didn’t write me a ticket even though I discovered I had left my bag at home with my freshly pressed license and insurance card.  He did have to call my parents though, because they had to bring my license so I could drive the car home legally.

The nice officer waited with me and my brother until they arrived and assured my dad (who was understandably not happy) that it wouldn’t affect my driving record since he wasn’t writing me a ticket.  It only affected my allowance for a time after that, since I of course had to pay my dad back for the cost of repair, and give up several Saturdays to help him fix it.   Lesson learned.

The next accident was many years later when I had just moved to New York for a new job.  On my way to work during my second week (and on another one of those 4-lane roads with no left-turn lane in the center) the car in front of the car in front of me suddenly stopped to make a left turn – without a blinker.

The three of us pulled over and waited for the police.  I got out, feeling a bit shaky, fully expecting to see my car crumpled front and back – but miraculously there was no damage to my car, or to the car I had been pushed into.  I had been watching the lady in my rear-view mirror and when I saw that she wasn’t going to stop in time, stood on the brakes so I’m pretty sure that’s what kept me from doing damage to the car in front of me.

While the two of us were spared damage, the lady behind me wasn’t so lucky.  Her whole front end was destroyed, and her car was going to need a tow.  Ironically, she had just dropped off her young one at daycare and had left her purse at the daycare, which meant she had no license or insurance card.  She got a ticket.

Two weeks ago today I had another little fender bender.   I had just finished my semi-monthly grocery shopping and was heading home, at a light where the right lane turns into its own lane, parallel to two more lanes going in the same direction.  The lady in front of me started around the curve of the lane, and then stopped suddenly.  Of course at that moment I was checking to see if there was traffic coming to my left, since I needed to move out of that right lane into one of the other two lanes since the right lane turned into a ‘right turn only’ lane.

In that split second of me looking to my left to check for traffic as I started to accelerate behind the lady who was pulling around the corner in front of me, is when she stopped.  For no reason.  I slammed on my brakes but wasn’t fast enough, so the front end of my Santa Fe hit the back end of her Saturn dead center.  Since I hit the lock of her trunk her trunk lid flew open.  We both finished pulling around the corner to get out of the way of the other traffic, and got out to assess the damage.

Lucky for me there was no damage at all to my front end, save for a few scratches next to my front grill, easily buffed out and nothing touch-up paint couldn’t fix.  She, on the other hand, wasn’t so lucky.  She couldn’t get her trunk lid to stay closed (so she used a lanyard to tie it closed), and her right taillight was cracked.  Lovely.

Luckily I have great insurance, and since we’ve been with the same agent and agency for over 10 years with no tickets or accidents, they took care of it immediately and ‘forgave’ me for this little fender bender, not letting it affect our ‘good driving record discount’.

And at least the fender bender wasn’t anything like this: 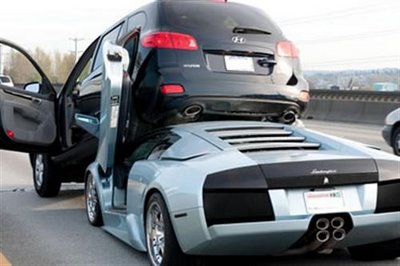 Yes, that’s a Lamborghini under the back end of a Hyundai Santa Fe.  No one was hurt (except maybe the driver of the Lamborghini’s ego).

I consider myself lucky.

In all the years of driving, have you ever had an accident?

This Lucky Spin Cycle was brought to you part by the lovely Gretchen at Second Blooming, who has graciously taken the reins from Jen who, as Sprite’s Keeper has too much on her plate and wanted to make sure her Spin Cycle baby was in good hands.  It definitely is.  Check out the other Lucky Spinners – let’s see who gets lucky.

I’m multiple-dipping as you can see – Link up if you like – that way I can visit you easily, especially if you’re a new follower (just please oh please leave a comment when you do!). You can be participating in any (or none) of the hops listed below – it’s a Free-For-All.

26 thoughts on “Luck and Fender Benders”