I still haven’t quite gotten used to the powers that be stealing that hour in the day.  I have a hypothesis about the time change and how it seems to be kicking our butts more so than it used to.  Because they made losing that hour longer by a month or more.

Taking away the hour and not giving it back until later doesn’t give us sufficient chance to acclimate properly.  Basically they might as well take the hour and never give it back, then we won’t do this whole waffling thing.  Now I want waffles.

Who says the groundhog knows what he’s talking about when spring has sprung before the first official day of spring?  We’re experiencing May weather in March – I’ve mentioned before that it makes me nervous about what the summer will be like.

I’m hoping Mother Nature fizzles out on her hot flashes before then and doesn’t have the heat come summertime.  Or at least not the stifling heat and humidity that we can have here.  I’d be happy with heat, just keep the stifling stuff and the humidity to yourself, Mother Nature.

Speaking of crazy weather and the hot/cold/hot that we’ve been pretty much having non-stop since fall, Princess Nagger and I are both still trying to get rid of colds and sinus infections we got before the New Year.  I hate sending Princess Nagger to school when she feels terrible and looks like death warmed over.  While a temperature yesterday of 99-degrees doesn’t really count as a fever, you still wonder if it’s not better for her to stay home and get over the yucks.

Only I can’t keep her home – not unless I want to turn into a hypochondriac and take her to the doctor every time she has the sniffles.  At least not for the rest of the school year, that is, because we got a sternly-worded note from school last week warning us that any future absent days would need to be accompanied by a doctor’s note or it would be marked as ‘unexcused’, since Princess Nagger has missed 11 days of school this year.  1/3 of those did have doctor’s notes (from the dentist) but the rest of the time she was home sick, she had a river of snot and a fever.  I’m not one of those mothers that sends her kid to school with a fever to pass it on to the other kids and teachers.

Three of those days the fever hit 103.6 – I was a little panicky, so I called her pediatrician’s office and they told me to give her a form of Tylenol to bring down the fever and help reduce the aches and pains.  They did say, though, that if the fever spiked any higher I’d need to take her to the ER.  Anything over 104 or 105 is ER-worthy.  It didn’t, and she was fine after a few days rest.

So now the school is basically telling me I need to send my kid to school sick – or take her to the doctor to get a doctor’s note even if it’s not ‘doctor-worthy’ just because they need that magical piece of paper.  By my calculations with our deductible and co-pay, it would be a $150 doctor’s note.  So fine, if she ends up with a fever, I’ll still send her to school so she can share the wealth.  I told her that if she’s feeling horrible, ask to see the nurse who can then call me to pick her up. That’ll circumvent the whole doctor’s note deal.

In other news… Some may or may not know that I entered the International Winemaker’s Competition last year and actually won a Silver Medal for one of the wines submitted.  I procrastinated until the last minute, getting the wines to the competition on the very last day.

I decided – at the last minute again – to enter again this year with some of my more recent wines, as well as one that I entered last year that got rave reviews from friends and customers, but didn’t even place in the competition.  I figured it might have a better chance this year, since it’s had time to age.  And wine does taste better as it ages.  Wish me luck!

Since I was a slacker and didn’t take any pictures to jazz up this post, I thought I’d share a past one of Princess Nagger when she was two: 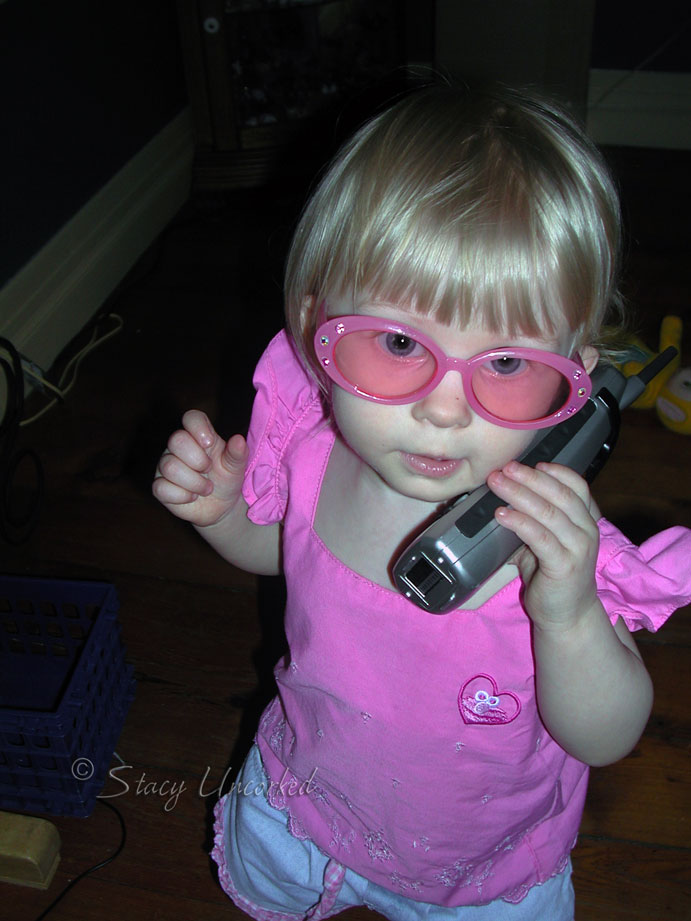 Sporting her ‘glamor’ sunglasses and carrying the phone (and you can’t see it, but she has one of my small clutches hanging from her arm hidden in shadow) chatter-boxing on the phone to no one.  It’s kind of ironic, because she’s lately been asking when will she be allowed to have a cell phone.  I’m holding out for as long as possible.  What age do you think cell phones should be allowed?

That’s about it for this week – feel free to link up and hop around to all the other awesome randomizers – they’re all so entertaining. If you’re visiting from Talk To Us Tuesday, feel free to link up, too – the more the merrier. I can’t remember if I was able to get around to everyone last week on the linky, and if I missed you, I apologize. I’ll be making a concerted effort today in between Hovering Hubby having a random day off and Little Dude demanding attention.  Rebel On!