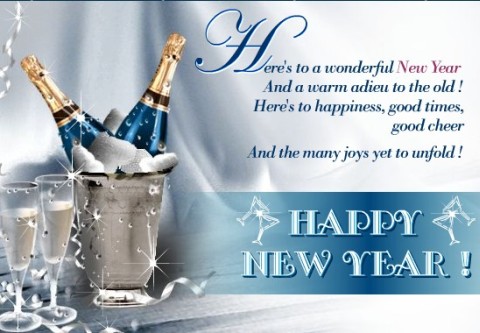 Here’s some fun trivia to start off your New Year with fun:

The New Year in Scotland is called Hogmanay. The people in Scotland follow a ritual that appears crazy, but actually has a great significance. One can find barrels of tar set afire and gradually rolled down the streets in the villages of Scotland. This ritual symbolizes that the old year is burned up and New Year is going to begin.

In Columbia, Cuba and Puerto Rico, families stuff a life-size male doll with things, then they dress it up in old clothes from each family member. At the stroke of midnight, this ‘Mr. Old Year’ is set on fire. This is done with the simple belief that a doll thus stuffed has bad memories or sadness associated with them, and that the burning will help one do away with all past grief’s and usher in happiness in life with the coming new year.

In Spain people eat 12 grapes as the clock strikes midnight (one each time the clock chimes) on New Year’s Eve. This peculiar ritual originated in the twentieth century when freak weather conditions resulted in an unseasonable bumper harvest of grapes. Not able to decide what to do about so many grapes at Christmas time, the King of Spain and the grape growers came up with the idea of the New Year ritual.  (We could modify this tradition with wine…after all, it’s made from grapes!)

Late on the evening of December 31, people of Japan would eat a bowl of buckwheat noodles called 220;toshikoshisoba” (“year-crossing noodles”) and listen for the sound of the Buddhist temple bells, which were rung 108 times at midnight. The sound of these bells is said to purify the listeners of the 108 sins or evil passions that plague every human being.  (I wonder what happens when someone has 109 sins?)In Greece children leave their shoes by the fireside on New Year’s Day (also the Festival of Saint Basil in Greece) with the hope that Saint Basil, who was famous for his kindness, will come and fill their shoes with gifts.

In Venezuela, Argentina, Bolivia, and Mexico, those with hopes of traveling in the New Year carry a suitcase around the house at midnight. Some even carry it around the block to ensure traveling at greater distances.  (Alrighty then – guess I better get my suitcase ready and head around the block!)

The first Ball Lowering celebration atop One Times Square was held on December 31, 1907 and is now a worldwide symbol of the turn of the New Year, seen via satellite by more than one billion people each year. The original New Year’s Eve Ball weighed 700 pounds and was 5 feet in diameter. It was made of iron and wood and was decorated with one-hundred 25-watt light bulbs.

It was thought that one could affect the luck they would have throughout the coming year by what they did or ate on the first day of the year. It is still held in some regions that special New Year foods are the harbingers of luck. For that reason, the Dutch believe that eating donuts on New Year’s Day will bring good fortune. The hog, and its meat, is considered lucky because it symbolizes prosperity. Cabbage is another “good luck” vegetable that is consumed on New Year’s Day by many. Cabbage leaves are also considered a sign of prosperity, being representative of paper currency. In some regions, rice is a lucky food that is eaten on New Year’s Day. The ancient Persians gave New Year’s gifts of eggs, which symbolized productiveness.

Many cultures believe that anything in the shape of a ring is good luck, because it symbolizes “coming full circle,” completing a year’s cycle.

Many parts of the U.S. celebrate the new year by consuming black-eyed peas. These legumes are typically accompanied by either hog jowls or ham. Black-eyed peas and other legumes have been considered good luck in many cultures.  (Ham I can get on board with – but hog jowls?  I think I’ll pass, thankyouverymuch!)

In China, many people wear in the new year a new pair of slippers that are purchased before the new year, because it means to step on the people who gossip about you.  (I’m off to buy new slippers before Thursday!)

“Auld Lang Syne” is sung at the stroke of midnight in almost every English-speaking country in the world to bring in the new year. At least partially written by Robert Burns in the 1700’s, it was first published in 1796 after Burns’ death. Early variations of the song were sung prior to 1700 and inspired Burns to produce the modern rendition. An old Scotch tune, “Auld Lang Syne” literally means “old long ago,” or simply, “the good old days.”

For those of you (like me) who never know what the lyrics are, here you go:

Should auld acquaintance be forgot and never brought to mind?

Should auld acquaintance be forgot and days of auld lang syne?

We’ll take a cup of kindness yet, for auld Lang syne.

Should auld acquaintance be forgot and never brought to mind?

Should auld acquaintance be forgot and days of auld Lang syne?

And here’s a hand, my trusty friend and gie’s a hand o’ thine