Friday night was the end to an awesome show.  We had to say Farewell to Chuck: 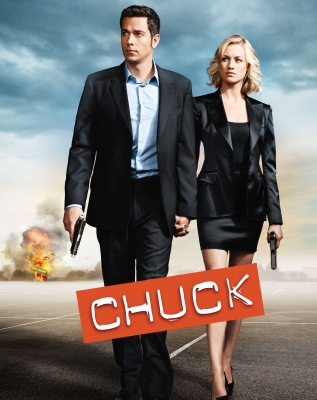 This is one of the shows that Princess Nagger and I enjoyed watching together. We both loved this show. So much so, that when Princess Nagger found out that Friday was the series finalé, she lamented about how much it will be missed and said “You will have to buy it on DVD.” I’m usually not one to buy TV series on DVD, unless they’re that good to where I wouldn’t mind the redundancy of watching them again (like F•R•I•E•N•D•S, which I would totally re-watch).  Chuck is that good.

Chuck made Geek sexy, and provided five years of fun entertainment.  Nerd-turned-spy (who didn’t like using real guns when fighting the bad guys, opting to use a dart gun to knock them out instead).  Winning the gorgeous spy girl, Sarah, and the whole unlikely team of spies and geeks combined into so much entertaining fun.  Farewell, Chuck.  You will be missed.   Unless I buy the series on DVD, then we’ll be revisiting you again very soon.

It’s already been a busy week, and today’s only Tuesday.  Yesterday I had a hair appointment while hubby had a dentist appointment – I had him take Little Dude with him so I could have some relaxation time.  I’ll get payback though, since I’ll have to take Little Dude with me to the dentist tomorrow for the beginning of a root canal.  Hopefully he’ll think PBS on the TV in the room will be more interesting than the pole dancing hubby said he was doing yesterday.  Ahem.

Today I was supposed to do my semi-monthly grocery shopping, but I decided to wait until hubby’s home all day Friday so I can go solo which will go much faster (and there won’t be any petulant whining when I have to say no to buying everything in sight).  Instead, I better finish up on laundry I totally ignored over the weekend.  Usually I make sure that all of it is done by Sunday night so there’s none looming over my head Monday morning.  It kept taunting me so this time I decided to ignore it, but now my peeps are running out of things to wear, so I’d best pay attention.

Speaking of ignoring things, I still have my Christmas tree up in the living room.  I’ve just not had the motivation to take it down for some reason, probably because I’ve got so many other things going on that it just doesn’t take priority.  I’ve also been procrastinating on finishing up wrapping the gifts for family and friends out West – Christmas gifts, mind you.  Hopefully I’ll get my act together soon so they can get them in time for Valentine’s Day.  Hopefully.

Hubby’s been working a split shift since the start of the New Year.  One of the instructors resigned right before the holidays, so hubby was stuck with covering the 7:30am class as well as teaching the class that runs until 10:30pm on Monday through Thursday.  He doesn’t get home until 11-ish, and of course there’s the needed hour minimum of wind-down time before going to bed to start over at 5:30am the next day.  He’s been coming home during his 2-3 hour ‘break’ in the middle of the day to take a nap.  I can’t take naps (plus I have to keep an eye on Little Dude, who seems to be anti-naps right now).  Needless to say my brain is in perpetual foggy mode lately from lack of sleep.

I’m looking forward to next term when he’ll be back on a ‘normal’ schedule so we’re not staying up past midnight and getting up at 5:30 each morning.  Instead he’ll just be teaching the morning class, so even though that means we’ll still be getting up at 5:30 each morning, he’ll actually be home in the evenings, and we’ll only have ourselves to blame for our foggy brains if we choose to stay up way past our bedtime.

That’s it for this week – I know I had some other things rattling around in my head I wanted to share, but it’s hindered by the fog.  Feel free to link up and hop around to all the other awesome randomizers – they’re all so entertaining. If you’re visiting from Talk To Us Tuesday, feel free to link up, too – the more the merrier. Rebel On!

32 thoughts on “Farewell Chuck, and a Busy Week with a Psycho Schedule leads to a Foggy Brain”