Have you seen the new Starbucks Bistro Boxes?  For a while I thought I’d only be able to see them on their website, rather than in person at a local Starbucks: 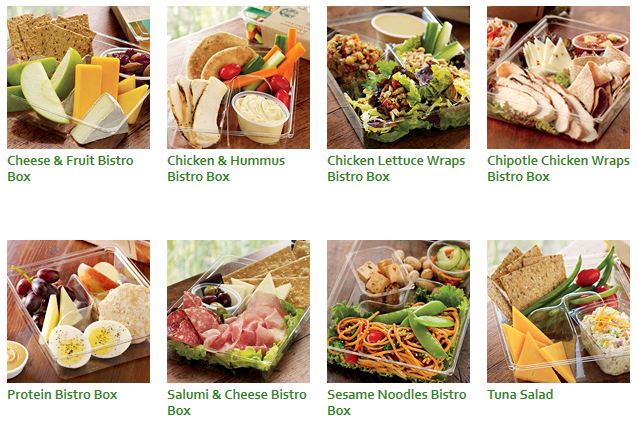 Don’t they look yummy?  There are eight different choices of Bistro Boxes, with something for everyone – including those that might be on a low carb, vegetarian or high protein diet.  I also liked the ingredients – things like fruit and vegetables, whole grain breads, cage free eggs, and even a piece of dark chocolate.   They have the Nutritional Value listed on their website, too: 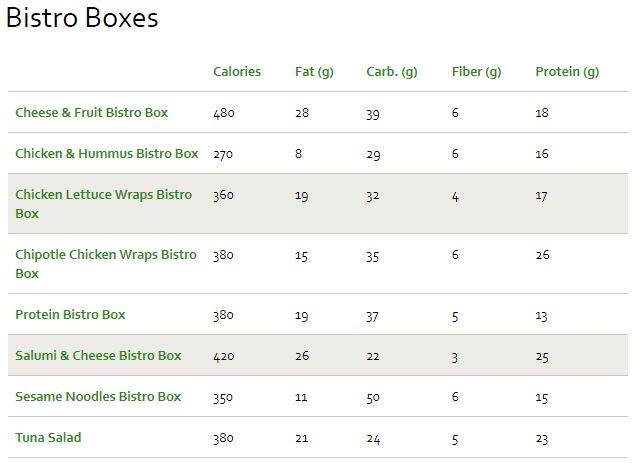 Not too bad – definitely better than grabbing a Value Meal at McD’s.  After drooling over the selections on their website, it was time to see about getting one to try for myself.  You know, so I could be the guinea pig and let you know if you would really enjoy them too.  You’re welcome.

There are 3 Starbucks within a half-hour drive from me – you’d think that one of them would carry these new Bistro Boxes, but you’d be wrong.  At least I was.   Since things can be so iffy in my neck of the woods, I figured I’d better call around first, just in case.  The first two I called disappointed me, because they don’t carry them (though my usual Starbucks said they’ve been trying to get them, so here’s hoping they actually do at some point).

Hoping I wouldn’t be in for ‘strike three’, the third one I called said they had them – since this one happened to be in the newest Super Target that recently opened, I figured it’d be worth the 30-minute drive to check out the new Target, and get a new Bistro Box.  Unfortunately, as I was standing in the check-out line to purchase the things that jumped into my cart of their own free will, I scrutinized the Starbucks and noted that my chances of getting a Bistro Box were slim-to-none.

Even though I had been told they carried the new Bistro Boxes, not only did they not carry them, but they didn’t even have  the typical pastries or biscotti I’m so used to seeing at every other Starbucks I’ve ever frequented.  I was so disappointed at striking out that I didn’t even buy my usual latte, leaving completely empty-handed.

Back to widening my search and phone calls.  I finally got confirmation at a Starbucks that’s a good 45-minutes from me, but luckily it’s not (too) out of the way from where my hubby works, so I recruited him to pick one up for me.  He came through in the clutch, though even he was disappointed that they only had the Chipotle Chicken Wraps left: 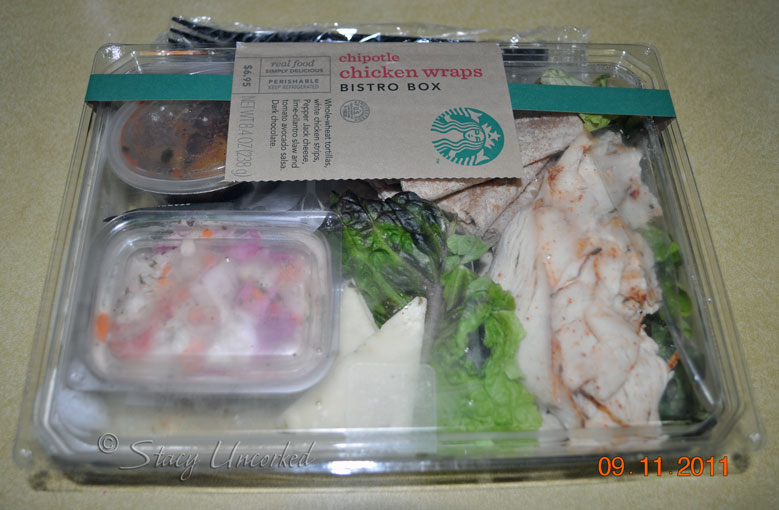 Since I wasn’t hungry, I stuck it in the fridge to try the next day, only to realize the freshness date had already passed.  By two days.  Which means it was one day past it’s freshness date when hubby picked it up.  I did taste-test everything, though (except the lettuce which was looking sad) because I wanted to give you a complete review, so I took a bite out of everything – and was impressed (aside from the sliced chicken itself seemed to harbor the most amount of salt overall).

While it’s considered a healthy option (and it is), I have to say I was really disappointed by the amount of sodium  in it – here’s what the full Nutritional Value on the Chipotle Chicken Wraps I got: 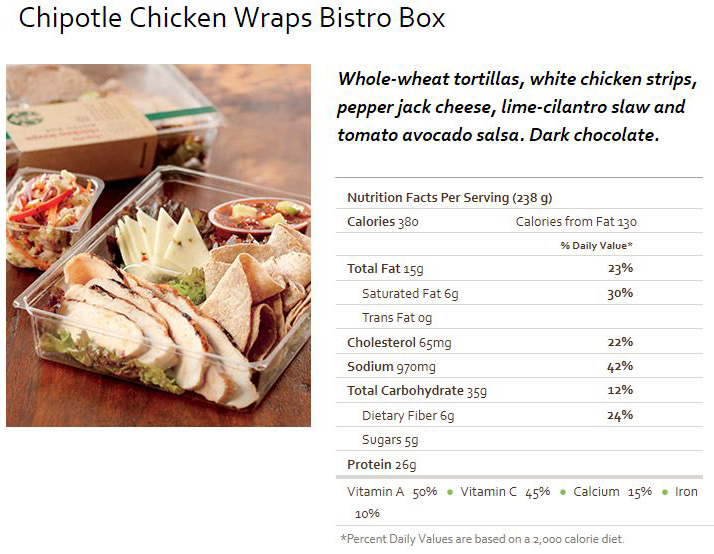 970 mg of sodium?  Much higher than I personally prefer for just one meal.  I have enough issues as it is retaining water without encouraging that mode with excessive salt.

Overall I think these new Bistro Boxes are a great idea for Starbucks, though I think they need to look at making sure more of the choices they show on their website are actually available in a live store, and should drop their price point by a dollar – I think $5.95 vs. $6.95 would encourage more people to purchase them vs. going somewhere quick(er) and easy(er).

Does your Starbucks stock most (or all) of the new Bistro Boxes?  Have you tried them yet?  Want to try them?  Here’s your chance!  Mom Central and Starbucks were very generous in sending me a $20 Starbucks Gift Card so I could purchase the Bistro Box for my review – only I forgot to give it to the hubby when he went on my Super Secret Starbucks Mission – so I’m offering it up to one of my readers instead.

Since Rafflecopter is not being very cooperative on my Blogiversary Giveaway, I’m keeping this as simple as it gets – just leave a comment telling me you want to win.  How simple is that?  So, what are you waiting for?

You have until Midnight EDT on September 25, 2011 to enter. 1 lucky winner will be randomly selected. I will email the winner who will have 48 hours to respond to the notification email or a new winner will be chosen. Open to U.S. Canada, and everyone who happens to have a Starbucks in their area – yes, that means (for once) any of my international friends can win, too. Good luck!

Note:  I wrote this review while participating in a campaign by Mom Central Consulting on behalf of Starbucks Bistro Boxes and received a gift card to facilitate my review and thank me for taking the time to participate.  See my Disclosure Policy here.