The countdown to the first day of school is definitely continuing – only 2 weeks before sending Princess Nagger off to school on the big yellow bus.  It’s crazy how fast the summer has flown by this year – though between you and me, I’m not going to be sad to see it go this year, only because Mother Nature’s Menopause has been exhausting.  Her terminal hot flashes really need to be medicated soon, or I’ll be wilted beyond recognition.  Our oppressive August heat continues – and it’s been in place since May, so you can see why I’m quite annoyed.

Hovering Hubby has a new nickname:  George.  As in George Washington.  Why?  I’m glad you asked.  When Princess Nagger and I got home from getting last minute goodies for her Fijit Friends Dance Party on Saturday (I’ll be posting about that tomorrow morning, you’ll have to wait on that), George had done this: 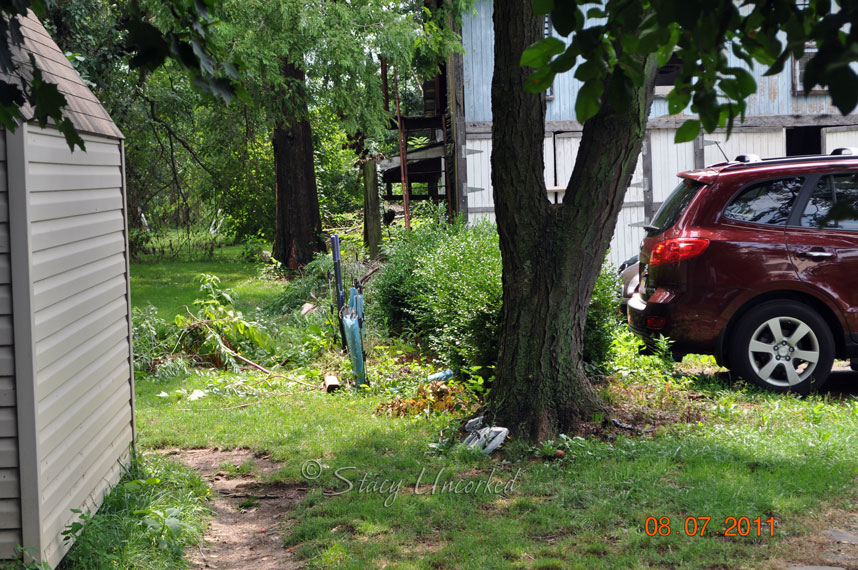 See those blue tubes?  Encased in those are the shorn trunks of my 6 cherry trees – what’s left of them are that pile’o’branches and leaves to the left.  He cut down my cherry trees!  Granted they were going to need some major TLC come fall, since they were growing sideways following the afternoon sun, but they were only 3 years old and could have been re-trained to grow upright.

We had talked about moving them or cutting them down when we were talking about building a carport in that location – only we had opted not to build a carport because it was going to be a pain to get a permit since we’d have to get some sort of variance from the township.  We decided to build a fence to block the annoying neighbors instead.   He felt bad and was going to go buy replacement trees right away, but I’ll just get new baby ones early next Spring and start over.  I’m still going to call him George, though.

This frog was eyeballing me from under one of my grapevines when I was outside the other day: 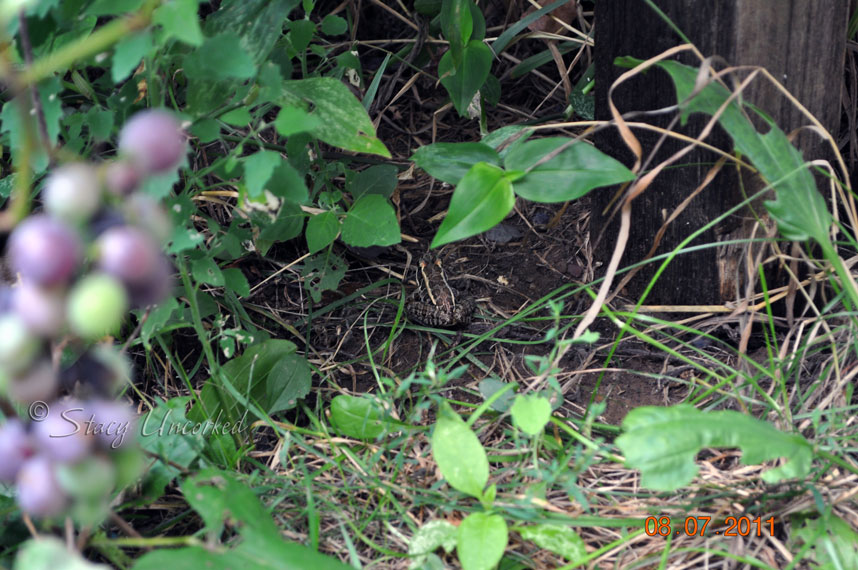 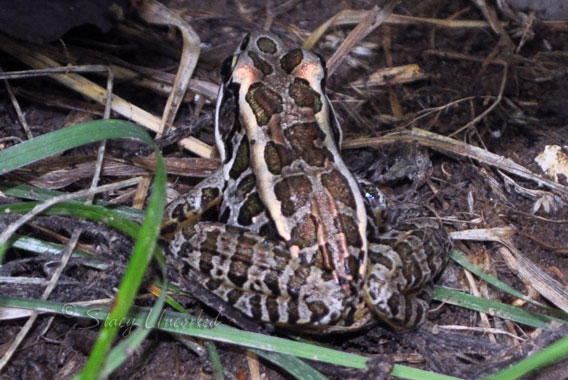 He refused to turn around and ham it up for the camera.  He’s obviously anti-paparazzi.

I’m keeping it short(ish) and sweet this week, I have some catching up to do from last week since things have been craaaaaaaazy busy – some of which is bloggable (coming soon), some of which is unbloggable (not coming soon – but good stuff, not bad).  So feel free to be a rebel with me and get your random on! Join in the fun – link up and check out the other randomness going on today!

Since there was a general protest for the linkies not cooperating for everyone last week, I’ve gone back to the original linky mode of before.  You’re welcome.

We’re still rebelling while Keely is still hiatus-ing, if you have a smorgasbord in your brain and want to let it out, c’mon and join in the fun! Rebel On!