I can be finicky when it comes to language.  When I text anyone, I cringe at myself if I opt to use some of the abbreviations so popular in texting, and find myself deleting the abbreviations and painstakingly tapping out each word one letter at a time.  I’m funny like that.  Peg from Square Peg in a Round Hole mentioned her pet peeve of the misuse of language and words, which describes me perfectly as well.

When Princess Nagger was born, we had either heard or read somewhere that it’s not actually a good idea to talk ‘baby talk’ to your baby.  At first I wasn’t sure exactly what that meant – how often does one find oneself going “Goo Goo Gah Gah” to an infant?

Before she learned to talk, I had a habit of having conversations with her – I would, of course, get funny looks from people if they caught me doing it, because I’d be speaking to her like she actually understood each and every word I spoke.  And none of it happened to be ‘baby talk’.   For instance, she’d be happily cooing in her swing minding her own baby business while I was folding laundry, and I’d be describing everything I was doing, right down to the article of clothing I was folding to why I was folding it a specific way.

Babies can sure communicate their thoughts and emotions not only by different cries, but also with simple facial expressions like Princess Nagger did at 8 weeks: 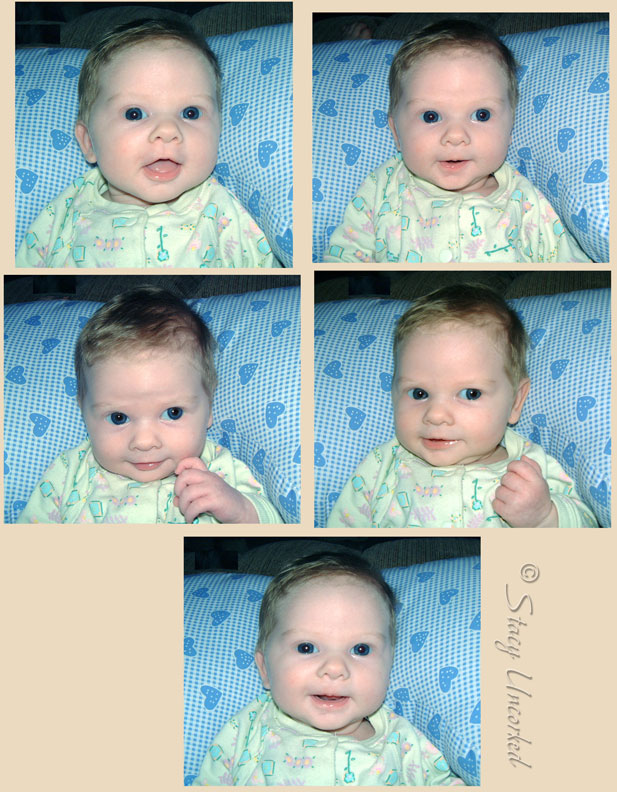 You can tell the gears were turning, even back then.

Both my hubby and I tend to utilize big words in pretty much every conversation we have – mostly from habit, but partly from wanting to challenge the Princess Nagger to learn and understand an expanded vocabulary.  It apparently worked, as she can certainly hold her own in a conversation with any adult, which at times will be a great source of entertainment.   She loves to learn new words and try to see how often she can work them into random sentences.  Makes a mama proud.

Of course during her toddler-speak stage, I didn’t have the heart to correct her words or vocabulary, because it was just too darn cute having her call a bathing suit a ‘baby snoot’.  I think my jaw probably hit the floor when she announced at the age of 5 that she was going to be a Paleontologist when she grows up.  She still amazes me with the level of words and vocabulary she uses on a day-to-day basis.

Just before the Little Dude arrived on the scene, we were warned that we might be in for a challenge and he may need to have speech therapy, since there are some issues with his communication.   I’m not going to lie and say it hasn’t been a challenge, after all we weren’t privy to how he was being taught during his learning to talk stage.   But I can say that I’ve already seen improvement in his speech and communication after only having been here just shy of two weeks.

I give a lot of that credit to Princess Nagger, since he looks up to her and wants to imitate her every move, including mimicking her speech.  Should be interesting to see if he also adopts the accents she uses when she’s pretending to be someone else – English, Scottish, Australian…sometimes a mix of all three.   Yes, she’s a dork, and the apple really doesn’t fall far from the tree.

This Spin Cycle was brought to you in part by Jen, who could easily finish my sentences with flair, and who is Sprite’s Keeper. Check out the other Spinners – see all the language barriers removed.  Or at least expounded upon.  You’ll be glad you did.