Technology has fast become a ‘normal’ part of every day life, hasn’t it?  It’s hard to imagine life without cell phones, let alone SmartPhones.  We’ve sure come a long way since the abacus (the first known calculator) was first invented in 2400 BC.

When I was a kid growing up, it was a big deal when we got an Atari – our friends all wanted to come over to our house and play games like pong and space invaders.  Even VCR’s were a big deal – my parents gave me their first VCR that had a wired remote when I moved out and got a place of my own.  But kids now?  They get introduced to all the cool toys at early ages.

Princess Nagger has always been an absorbent sponge – she showed interest in technology at a very early age, beginning with the remote control: See that look on her face?  Mischief abounds.  Simply by observing she has figured out how to use all subsequent remotes – she’s a champion using the DVR remote to record her favorite shows like Phineas and Ferb and iCarly.   She complains if the DVR gets too full of my shows, if there’s something she wants to record that there’s no room for.

When she was a baby, she had to put up with non-technological fun, like her exersaucer: Yes, that’s a future blackmail picture, hence the spiked ‘do. Of course she still had her usual non-technological fun – give her a box to play in, and she was quite content: 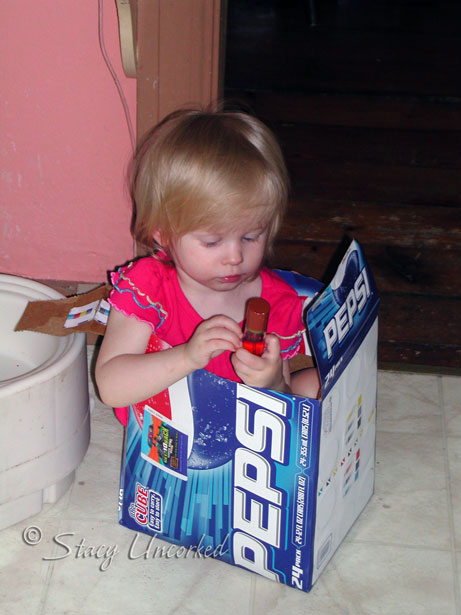 The writing was on the wall for future phone fun: 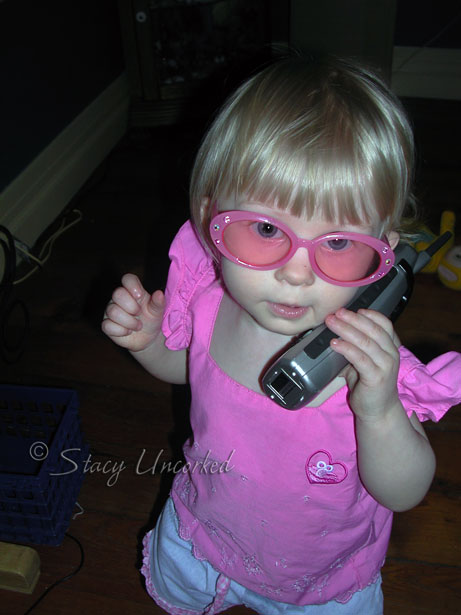 "Have your people call my people. I gotta go - the paparazzi is at it again!"

As she grew, so did her interest in anything technological.  Especially if it happened to be a dinosaur, like her remote-control Spike: She asked Santa for a Nintendo DSi XL this past Christmas – and got it, but now they’ve come out with the 3DS she now says she has to have.  So she’s going to let me sell her DSi XL on eBay and save up the difference to acquire the 3DS.  My hubby also (finally) got me the Galaxy Tablet he had promised for my Mother’s Day present – guess who’s been monopolizing it?  You guessed it – Princess Nagger has been thoroughly enjoying playing Angry Birds and some shark game on what she refers to as a ‘giant screen’.  I’m glad she’s enjoying my Mother’s Day gift.

And of course we have a fun stash of video games – much better ones than when I was a kid with the Atari.  Now it’s Game Cube, Wii and PS2 (I steadfastly refuse to buy a PS3 until they make them backwards compatible so we can continue to enjoy our PS1 and Ps2 games): It used to be that I would play all the fun video games (at her insistence) while she watched – now she plays them (and kicks my butt every time we play Wii Bowling) and rarely needs my help to get her through a level.  She ‘helps’ me get through levels of Angry Birds, and I ‘help’ her when she gets stuck.  When I got a Kindle for my birthday, the first books I downloaded on it were dinosaur and dragon books for her to read – which she did quite enthusiastically.

At least now I have my Kindle back all to myself, and she thinks it’s quite fun that we have matching book lights, so when it’s time for bed we turn off the lights and read a couple of chapters together in the dark – she with one of her favorite ‘regular’ books, me with my Kindle.

It just boggles the mind how far we’ve come from when we were kids and personal computers were a dream – and now?  Princess Nagger happily utilizes my hand-me-down laptop to play fun games at JumpStart, PBS Kids, Nickelodeon, Disney, and now more recently, Facebook. At least I don’t feel guilty about the evenings spent on my computer – we’re all hanging out together in the Summer House, hubby on his computer and Princess Nagger on hers.  21st Century ‘Family Time’.  Princess Nagger’s come a long way from her first foray into technology with her Barbie laptop – but it’s also a rude awakening to me that she’s growing up fast.

What about you – are your kids tech-savvy?

This Kid Technological Spin Cycle was brought to you in part by Jen, who as Sprite’s Keeper will undoubtedly have a technological genius on her hands as Sprite gets older.  Stop by and check out the other Spinners and see who loves technology and who doesn’t.  You might learn something.