Can I just say that I truly hate when the time change makes us ‘Spring Ahead’?  I wish they’d just pick one and keep it that way year round instead of giving us an extra hour in the fall, then yanking it back in the spring.  Not to mention that they extended the period of time when we lose that hour; taking it away earlier and giving it back later.  If we’re going to be subjected to saving daylight, why not do it year round?  I never seem to get caught up until it changes back again.  For now, expect lots of yawning to be going on over here!

Remember when I posted this picture: 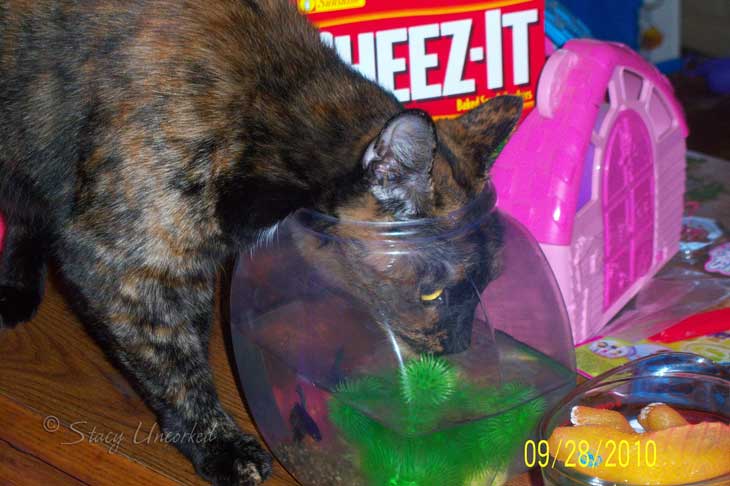 Apparently the ‘fighting fish’ really should be a catfish…only because he seems to have multiple lives.  Our cat Zelda loves drinking the water from the fish bowl – sometimes she’ll stick her paw in there and bat at the fish, since she doesn’t have claws the fish just laughs at her.  Or so I assume.  And yes, Princess Nagger named the cat from The Legend of Zelda – which means the rescue kitty we found on our back porch is now named Link.   I moved the fish bowl to the kitchen where it’s warmer during the winter and for a while it seemed that Zelda was leaving the poor fish alone, save for the occasional stolen drink.

One day last week, I was upstairs getting ready to head to the store when the dogs started barking – I assumed it was they’re typical “FedEx is here!  FedEx is here!” bark, so I pretty much ignored them until I was ready to come downstairs.   When I went into the kitchen, I was horrified to see that the fishbowl had been knocked completely off the counter – water all over the floor, the bowl on its side and the fish laying on the floor motionless with Zelda guarding him.  Poor fish.  I thought for sure he was a goner.

I swooped in and righted the bowl, grabbed a paper towel and gingerly picked up the fish and plopped him back into what was left of the water, figuring it would be easier to send him to his watery grave down the toilet from the bowl.  Only he started moving.   Good thing I didn’t dump him in the toilet from the paper towel.  He would have been a goner for sure.  I’m thinking about getting one of these: 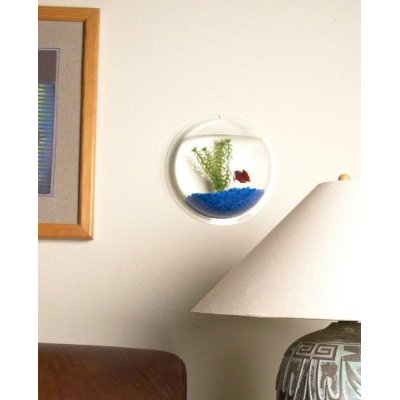 You’re seeing that right – it’s actually a wall-mounted fish bowl!  That might allow the fish to keep his other 7 or 8 lives.  I’m just surprised he’s survived this long – the other fighting fish Princess Nagger has had in the past didn’t fare so well.  This one sure is true to his name – a real fighter!  I kept thinking as I was cleaning up the mess “I really should have taken a picture for the blog”.  But it’s probably a good thing I didn’t, or the fish may not have stood a chance.

Princess Nagger found her Kindergarten journal she wrote and was mocking how she used to write ‘way back then’.  You know, a year-and-a-half ago.  Apparently she was correcting herself on spelling and grammar, and making fun of her own drawings.  She said “Looks like a little kid wrote this!”  Um, yeah – a kindergartner, actually!  I’m looking forward to seeing how she views her current journals she’s been writing – wonder how many spelling and grammar errors she’ll be nit-picking about, or how she’ll view her own drawings later?  Should be fun!

The boys made some great headway on the Summer House renovation on Sunday while I was busy racking and bottling wine.  I’ll be taking pictures soon, but suffice it to say, I sure wish we had thought about doing this project sooner rather than when we’re making plans to sell the house and move back to Seattle in the next year or two.  It would have been nice to have enjoyed it in its beautified state it’s quickly becoming.  Stay tuned for pictures – hopefully next week!

That’s enough for this week – not quite as random, but at least shorter than ‘normal’.  Don’t forget to head over to The Un-Mom – the queen of randomness who never disappoints. Feel free to get your random on and join in the fun!