Happy New Year!  Yeah, I’m sure you’re getting tired of hearing that phrase already.  But it’s the first RTT for the New Year, so I couldn’t resist.

I was able to recruit the hubby into taking all the Christmas decorations off the front porch for me while I was busy trying to get the pile’o’boxes of Christmas goodies ready to ship this weekend.  You read that right – I finally shipped my family and friends their Christmas gifts and goodies yesterday.   Late is probably an understatement, but better late than never.

It happens every year – I buy stuff way in advance, fully intending on getting them to their destinations in time for Christmas, but every year I can’t seem to get it together and get it all done and shipped out.  It will be nice when we move back to Seattle so I won’t have to pay $100+ in shipping costs to send off a Merry Christmas – I’ll be able to just deliver them in person.  That will be so cool.  And much more Merry.

Oh, and the reason getting the hubby to take down the Christmas decor off the front porch for me is so significant?  Because usually I do that all myself – and last year I was really late getting that all taken care of.  You know, like February for the porch, and May for the tree.  I had been tempted to leave the tree up year ’round last year and simply decorate it for each holiday, but finally got tired of the massiveness of it invading my living room.  This year, since we got a smaller (read: scraggly) tree, while it’s still up, Princess Nagger and I took all the ornaments off yesterday, and it will be stored away by the end of this week, rendering my living room back to ‘normal’ in record speed.

Here’s a (not so great) comparison of last year’s tree vs. this year’s tree: 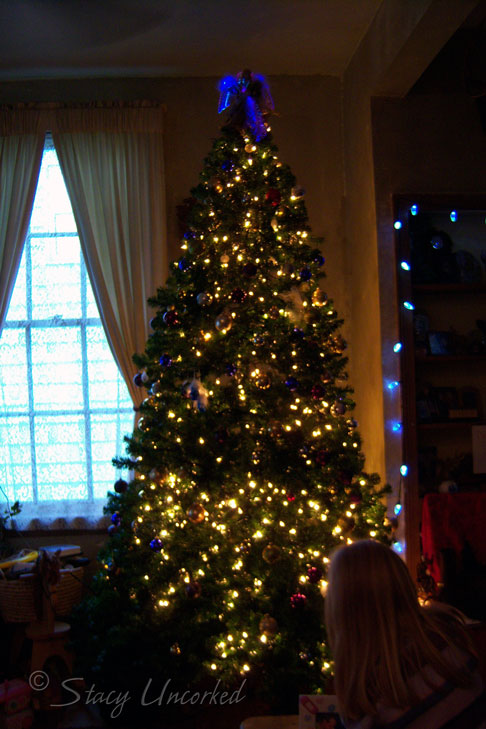 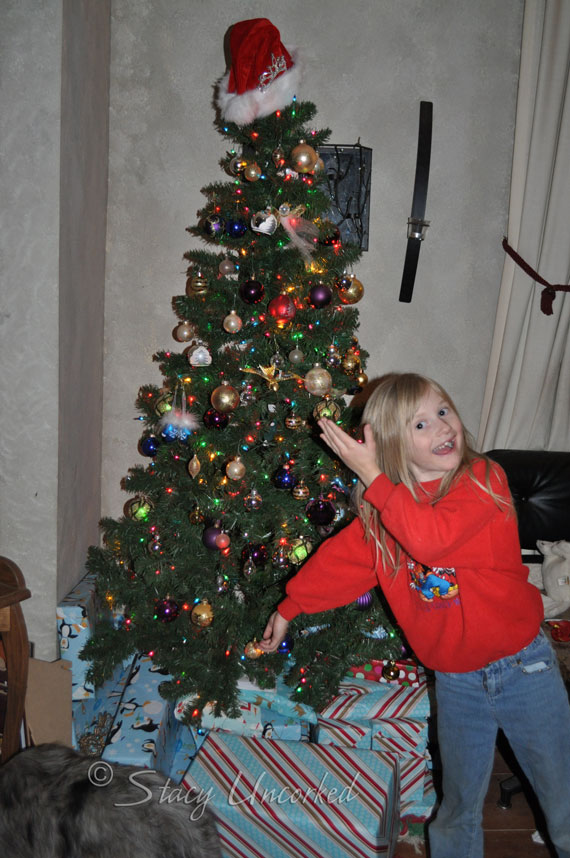 While we didn’t put even half the ornaments we have on it, we did put the important ones.  And some extras.  Princess Nagger got a kick out of me putting her Princess Santa Hat on top in lieu of the angel (and it was actually just a temporary thing to make sure the dogs didn’t mistake it for a chew toy, but became a permanent fixture for the topper this year, per Princess Nagger’s request.)

I actually got Princess Nagger to finally help get her piles’o’stuff cleaned up in the living room yesterday after her first day back to school.  Sure, she was in mega Drama Queen mode, and kept protesting that she was too tired to help clean up, but after threats of tossing everything into a box marked ‘eBay’, she dove in a little more enthusiastically.  Ahem.

We had a rough start with our switch back over to Comcast – but after I made 50 calls to them on Tuesday (because I had no internet, and every time I used the phone, the cable modem would reboot itself about two-minutes into the call (which would take out both the phone and the internet) making me start over again with the Comcast computer).  I’m sure they got tired of me finally getting hold of a ‘human’, only to get cut off barely into my sentence of explanation.  I think they thought I was one crazy lady.

They finally sent a tech guy out at 8pm Tuesday night after I was without internet and phone since noon that day, (and someone was supposed to be here by 5pm (to which they promised a $20 credit to our account for their ‘customer guarantee)), and I’m pretty sure he thought I was crazy, too, as he perused my computer to see what I had messed up.  So I decided to call Comcast while he was here, and sure enough, barely two-minutes into the phone call, the cable modem rebooted.  Proof that  I wasn’t crazy.  He immediately swapped out the cable modem, and connection has been pretty much successful ever since.  Well, except for the hubby’s 2 computers.  But that turned out to be user error.

Just as I was finishing up this post last night, I received an ‘exception’ from FedEx for one of the boxes I shipped out yesterday.  They damaged one of the boxes, and it won’t be delivered.  Great!! The box hadn’t even left the state, and was heading to Nevada.  Not anymore.   I spent some time on the phone with a customer service rep because it contained gifts I had been collecting over the last six-months for my best friend and her hubby and son – hopefully they’ll return the box to me so I can assess the damage and maybe try again.  I decided to use FedEx because 1) they’re cheap, and 2) I’ve always had good luck with them not losing or damaging boxes during shipping.  Until now. Damn Murphy’s Law!

That about wraps it up for me this week – don’t forget to head over to visit Keely the Un-Mom – hopefully Murphy’s Law won’t be wreaking havoc with her so early in the New Year.