Thanksgiving week!  Here already!   Sorry my Canadian friends that you won’t be getting a four-day weekend to indulge in overindulgence.  You can always come here, I’ll feed you!

Speaking of a four-day weekend, starting tomorrow Princess Nagger will be off school until next Tuesday.  I don’t remember having a 6-day weekend for Thanksgiving when I was in school.  I look forward to the extra time to be nagged into playing with her, but I won’t be looking forward to Tuesday morning when she’ll be reluctant to go back to school after all those days off.

Of course the first three days of her six days off will be filled with lots of activity – she and I have a ‘date’ to see Tangled tomorrow, then of course Thursday is Thanksgiving, and Friday we’re going to the Dinosaur Museum in Philly for Dinosaur Days.  Saturday and Sunday we’ll be putting up Christmas decorations – maybe I’ll just have to keep her so busy she’ll want to go to school on Tuesday for a break from mama!

Speaking of ‘breaks’ my laptop is still on its way out, but I haven’t done anything about it…yet.  I did mention a new laptop as an ‘idea’ to hubby when he asked what I wanted for my birthday and Christmas.  Maybe I’ll get lucky.  I figure I’ll wait and see what happens before going out and buying a new one for myself, since my birthday is only two weeks away and Christmas shortly thereafter.

Speaking of gifts, I always have trouble getting hubby gifts because when I ask for his ‘list’ or to get ideas on what to get him, it’s like he realizes whatever ideas he gives me he needs right now…and goes out and buys them himself. It can be pretty comical, especially the year he needed a new leather jacket, so I bought him one for Christmas.  Princess Nagger was 3 at the time, and after we got home I just had enough time to wrap it and put it under the tree before hubby came home from work.  He had barely stepped two feet inside the door when PN ran up to him and yelled “Surprise!  We bought you a leather coat, Dada!!”  So much for keeping it ‘secret’ until Christmas.

What was really funny is that he had only mentioned it to me several days earlier (which prompted the trip to find one) and ironically two days before I found the one, he bought one for himself.  The exact same style, at the exact same store.   At least we were on the same wave length!   Now that Princess Nagger is older, she understands the concept of keeping it a secret until Christmas.  Of course now I just shop when she’s at school in order to hedge my bets.

Speaking of Christmas shopping – I’m all done shopping for Princess Nagger (except her Santa Gift – she’s asking for a Nintendo DSi XL from Santa…I figured I’d wait and see if anyone comes up with good deals for Black Friday or Cyber Monday before getting one).   The only shopping I’m not done with is the hubby’s – I better get his ‘list’ soon and hope he doesn’t buy the stuff himself between now and then!

Do you Tweet?  I don’t much – I have Twitter set up to automatically post my new posts, and once-in-a-while I’ll throw something out into the Twitter world.  I really wanted to send some random tweets Friday when I was out doing my bi-monthly grocery shopping, but I forgot my phone.  Along with my shopping list (had to wing it – though I did pretty darn good considering it was a longer list than usual with the extra Thanksgiving stuff on it).

I could have tweeted how there was a creeeeeeeeeepy guy following me through the parking lot whistling some weird random tune.  Or how there was some woman animatedly talking on her cell phone about her life drama while pushing her cart recklessly through the aisles, barely missed crashing into me and others and blocking my path many times…and throwing me an annoyed look like I was in her way.  That was the day I could have actually sent some random entertaining tweets.  Maybe next time.

PN:  “Can I help perform surgery on the turkey for Thanksgiving?”

PN:  “You know, perform surgery on the turkey!  Can I help?”

(I suddenly remembered that PN must have overheard my conversation on the phone as I explained my Champagne Turkey recipe and how I jokingly said I give the turkey a ‘boob-job’.  Or when she watched me closely last year performing the ‘surgery’, and I joked with hubby about it when he came in to see what we were up to.  Ooops.)

Me:  “Oh! You mean when I add butter under the skin of the turkey.”

(My sister always wears rubber gloves when she’s handling raw meat…which I teased her mercilessly about when we were visiting on vacation…Love ya, Sis!)

PN:  “I don’t want to touch the turkey with my bare hands!  Of course I will wear gloves – just like Aunt Kimn!”

Me (laughing):  “OK, you can help me.  In fact, I’ll get some surgical gloves for you to wear during the surgery.”

Me:  “They sure do – and that will be better than kitchen gloves, they’ll probably fit your hands better.” 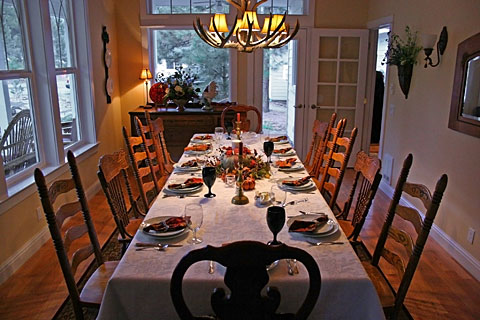 No, this is not my table…or my dining room.  I wish!  But I neglected to get any pictures ready for this week, so I thought I’d throw this one in there.  Is your menu all planned and are you as excited as I am to stuff your face without (much) guilt?  I’ll be making my usual Champagne Turkey, Make Ahead Mashed Potatoes, Sweet Potatoes, Apple Stuffing, Cranberry Sauce, Pumpkin Pie, Apple Cranberry Pie and Creme Brulee.  Care to join us?

Can you believe it’s December?! Every year I swear the time flies by faster and faster. So we here in the Pacific Northwest have decided, after an extended summer and very much shortened fall, that we’re ready for winter. As … Continue reading →