The dentist office is not my favorite place to visit.  The only saving grace to going to the dentist office is the awesome people that work there (yes, that includes the dentist), but if I had my way, I’d much rather be doing something else.  Princess Nagger is no different.  We both had our teeth cleaned last week, and wouldn’t you know it, I had a hundred-year-old filling that was missing a chunk and needed to be replaced, and PN had a baby tooth that was starting to exhibit some signs of abscess and needed to be pulled rather than wait for the adult tooth growing in behind it to send it on its merry way.

Unfortunately Princess Nagger inherited ‘soft’ teeth from me – no matter how diligent she is with brushing and flossing, she’s prone to have minor issues – that can turn into major ones (like when I thought her 6-year molars were coming in, but turned out to be an infected/abscessed tooth that needed to be pulled…poor thing!)  Of course ever since then she’s been more than just a little reluctant to go to the dentist office, telling me to never use the ‘D’ word (you know, ‘dentist’) and gets herself all worked up if we have even a tame appointment to get our teeth cleaned (she inherited her anti-dentist mind-set from her Dada.)

Anyhoo…yesterday Princess Nagger was off school, so rather than have her miss a day in the future, I scheduled both our appointments for yesterday.  I know, I’m such a mean mom forcing her to go to the dentist on her day off from school!  But there was the promise of Toys R Us, McDonald’s and going to see the movie Megamind afterwards.  I’m not above bribery.

When we got to the dentist office, I so wanted to take out my cell phone and send a quick tweet about the growth on my ankle – since PN was literally laying on the floor with her arms wrapped around my ankle protesting that she didn’t want her tooth to be pulled.  I finally coaxed her to the waiting room, but at that moment we were called back.

Once we got into the room, PN steadfastly refused to get into the dental chair, constantly saying she was scared, and didn’t want her tooth pulled.  I tried to reason with her – cajoling turned to threats to start eliminating the other plans for the day.  At one point I was so exasperated by her Drama Queen mode that I offered that we simply go home now and forget about everything else we had planned…thinking she would acquiesce and scoot into the chair if she thought the prospect of going to Toys R Us, McDonald’s and seeing the movie Megamind would not be happening at all.  I was a little taken aback when her crocodile tears immediately disappeared and she asked hopefully, “You mean we can go home right now?”

I shot a look to the wonderfully patient dental assistant (Hi Lori!) completely dumbfounded that PN would actually opt to not have her coveted trip to Toys R Us and forgo seeing the movie she’s been dying to see since the first previews came out, as long as she didn’t have to have her tooth pulled today.  Somehow we managed to get her into the dental chair and the awesome Lori swiftly put the ‘elephant nose’ in place.  We both coaxed PN to stop crying long enough to start breathing in (deeply) through her nose to let the laughing gas take its effect (too bad I couldn’t put that elephant nose on my face for a few minutes – I could have used some calming down).  We also sort of misled her a tiny bit – they did, after all, need to add some sealant to some of her back teeth, so we convinced her to at least calm down for that part.

Luckily that seemed to lull her into a sense of security (that mixed with the awesomeness of the laughing gas and the dentist and dental assistant’s calming voices) (though she kept saying over and over again “If you have to pull the tooth, don’t pull it today, please!!”) so when it was time for the dentist to pull the offending tooth, PN was a bit caught off guard (but not so much so that she didn’t emit an ear piercing shriek as the dentist finally pulled the tooth free).  PN did giggle, though, when the dentist commented about forgetting PN didn’t want the tooth pulled today.

Along with inheriting soft teeth from me, she also inherited abnormally large roots: 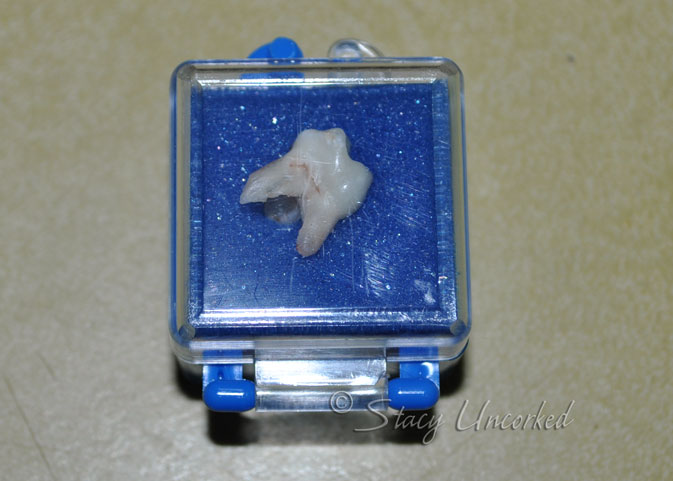 Here’s a better view with a dime as comparison: 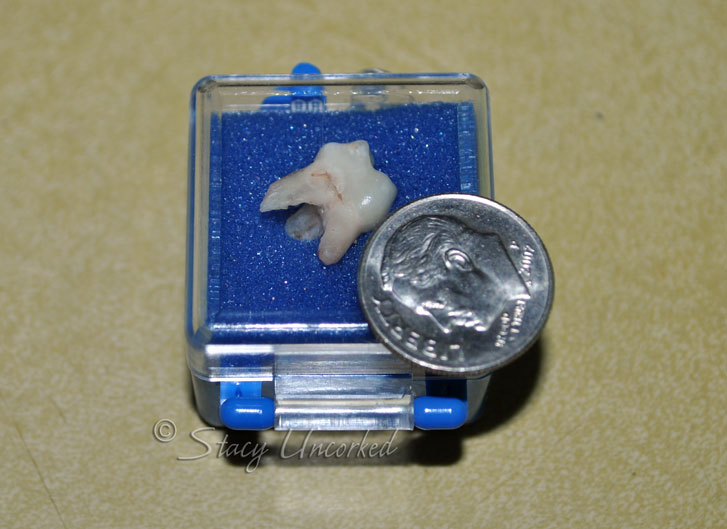 No wonder her baby teeth seem to be loose forever before they finally fall out – they’re hanging on for dear life with roots like that!  Poor thing.  At least that offending tooth is gone and won’t present a problem for the adult tooth slowly coming in, and my ancient filling replacement went without a hitch (aside from after the numbness wore off, feeling like I had been punched in the jaw), so we proceeded to the fun part of the day with the promised trip to Toys R Us.

I was wearing my older glasses since the frames are smaller than my newer ones to accommodate putting the 3D glasses over them for the movie (luckily my vision hasn’t changed in 10 years so the prescription was OK and they have transitional lenses, so I wouldn’t have to swap between my sunglasses which is a pain when you need three hands – except that they don’t ‘transition’ when in the car, so I put my sunglasses on in the car so I wouldn’t have to be blinded while driving).  I forgot to switch out my sunglasses before entering Toys R Us – I kept waiting for the darkness of the lenses to fade, only to realize that I still had my sunglasses on.  D’oh! I didn’t want to be one of those people – the kind that think they’re too cool to remove their sunglasses when indoors, so  I took them off and had PN ‘direct’ me from her vantage point in the basket of the shopping cart as I wandered blindly through the aisles searching for the much anticipated dinosaur/dragon aisle.  Yeah, that was fun.  Should have just worn my contacts but my eyes were too tired to handle them yesterday.

We finally made it (safely) to the preferred aisle, and PN decided to get dragons this time, since she chose that for her ‘Independent Study’ in her gifted class (they’re writing about a subject of interest, but they had to choose something they aren’t familiar with, so she wasn’t allowed to choose dinosaurs.  She knows too much.)  We noticed that Toys R Us was having a special deal that if you spend $25 or more on Animal Planet products, you get a free bucket’o’dinosaurs.  Sweet! I mentally had a limit of $20 for the reward, and figured an extra $5 was worth getting a bucket’o’dinosaurs free.  That created a new flurry of indecisiveness with the Princess Nagger on what to get, but she finally managed to pick out some cool dragon figures and got the bucket’o’dinosaurs, too: 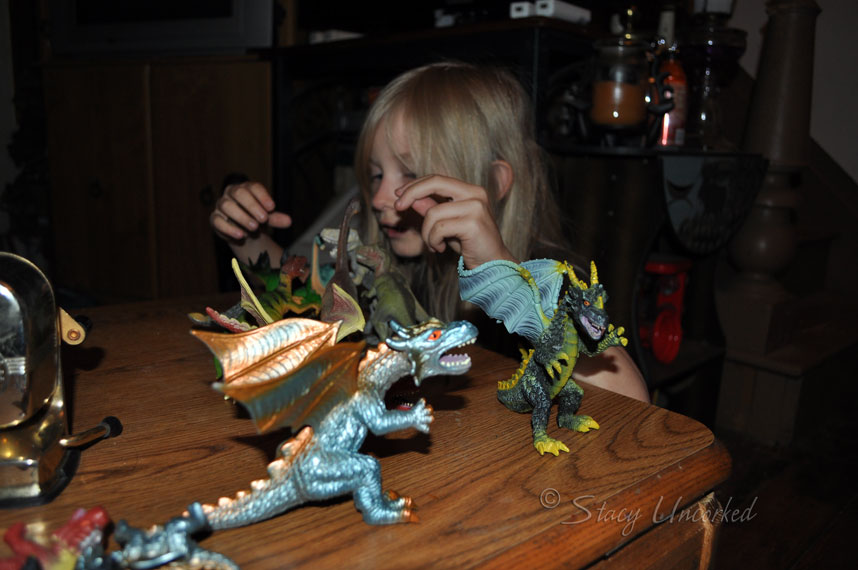 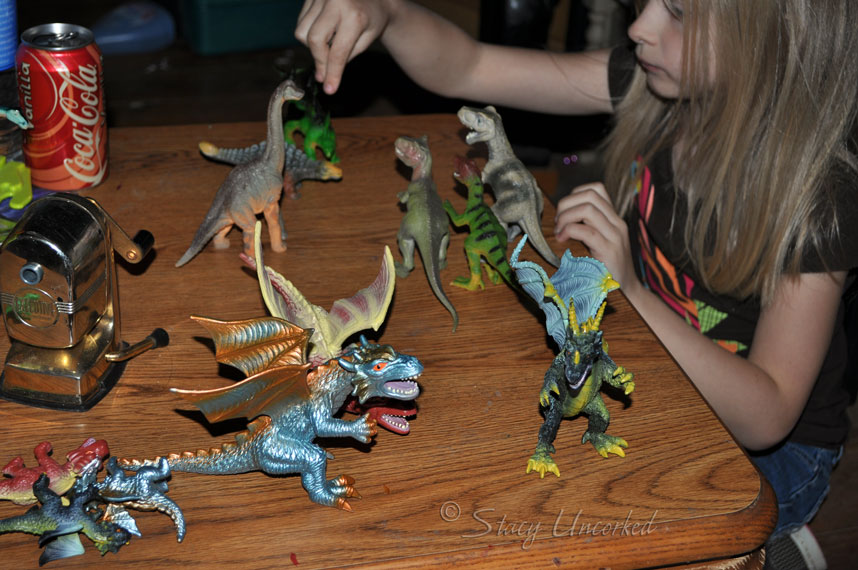 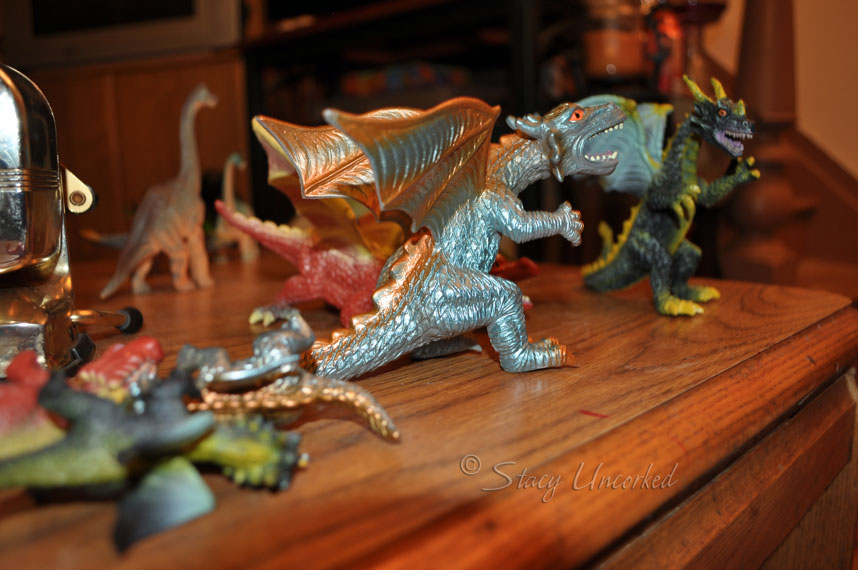 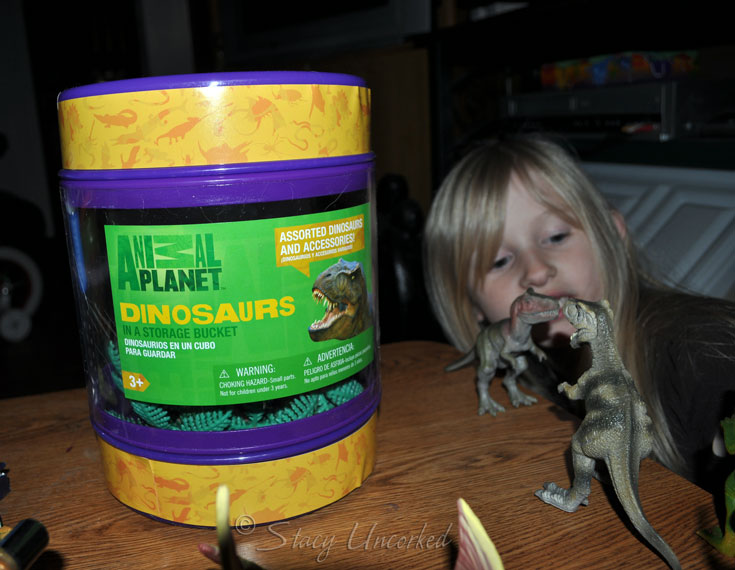 She scored 12 dragons and 9 more dinosaurs with some palm trees and rocks.  She was a happy camper.  Next was a  quick trip through the McDonald’s drive-thru, then off to the theater to see Megamind.  This time they actually had small 3D glasses for Princess Nagger.  Check out the difference: 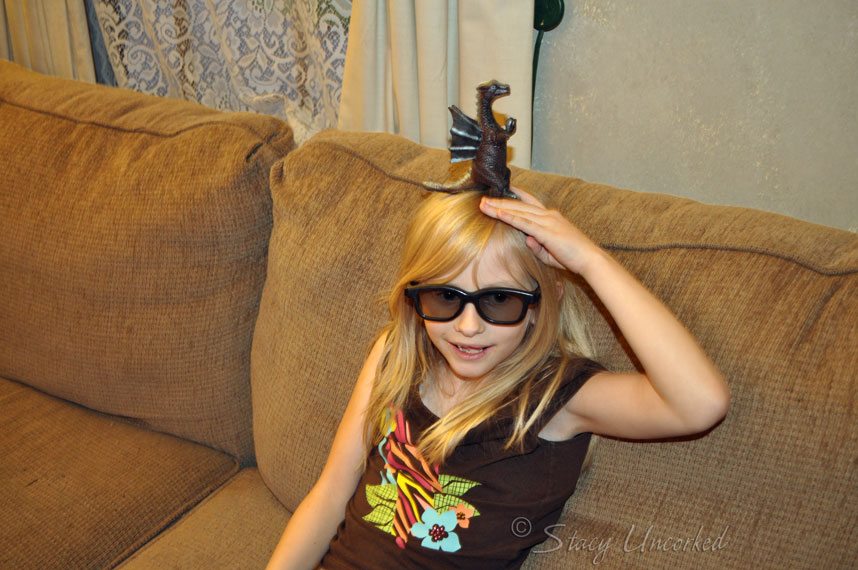 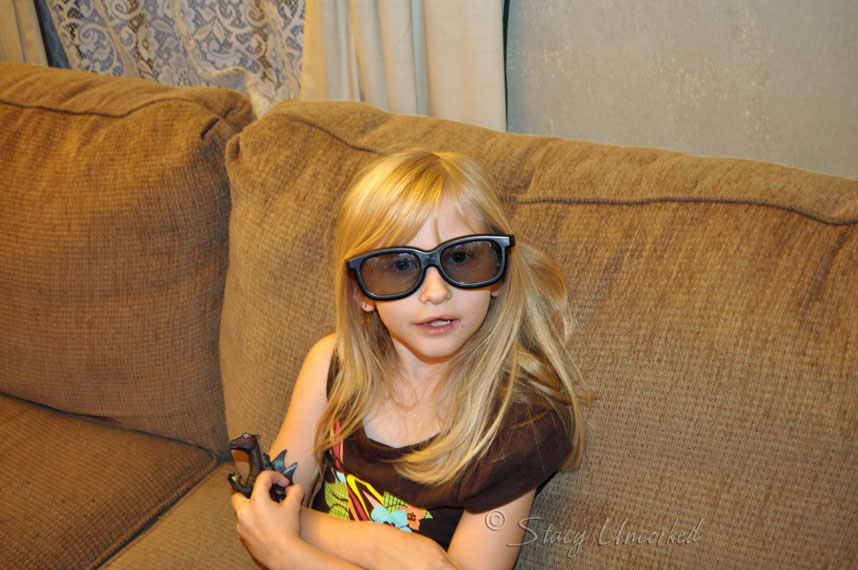 Of the 3D movies we’ve seen in recent past, I have to say that Megamind was the best visually.  The movie was definitely cute, and Princess Nagger said it was “Laugh out loud funny – I give it 5 stars!”  So it passed the PN rating system with flying colors.

How was your Monday?