A final decision has been made for Princess Nagger’s Halloween costume.  Finally.  And Final.  She’s going to go as Soren, from The Legend of the Guardians:

She decided to overlook what she considered ‘lame’ with the stuffed owl head on top of her head, because the wings are what sold her on the costume – that her arms will actually be the wings.  It shipped from Warner Brothers yesterday, and the UPS tracking number says it will be here tomorrow.  Plenty of time before Halloween for her to practice her wing flaps and swoop around the house.  She’s so excited.

I have caught my fourth cold in the past 3 months.  Murphy and his Law have it out for me for sure.  I’m sure a lot of it has to do with not getting much sleep, the weather continuing to wildly fluctuate from hot to cold to hot, and spending every day last week visiting my FIL and clearing out his studio apartment since there’s no chance of him moving back in short of a radical miracle.  We didn’t go down on Saturday to visit, as my hubby had a gig to play, and I had bi-monthly grocery shopping to do.  Which I hate doing on Saturdays – that seems to be when all the rude and obnoxious people are out and about.

Hubby went down to visit his dad by himself on Sunday since there are signs posted in huge letters all over that place that if you’re sick, you’re not allowed past a certain point.  And Princess Nagger was too scared to go without me (plus she said she wanted to make sure I wasn’t lonely here all by myself).   He felt as if it was the ‘goodbye’ visit based on how weak his dad is and his emphatic goodbye to my hubby when he wrapped up his visit.  Along with that, rather than his usual 220;Say hello to the girls for me” instead he said “Say goodbye to the girls for me”.

We’ve been ‘expecting’ the ‘end’ for 13 years – I’m so glad that he’s hung in there all this time so he could form a stronger bond with his son, and get to know his granddaughter.  I’m thinking it was a good thing I caught another cold and couldn’t go down on Sunday – from what my hubby described of his dad’s condition, it’s probably best Princess Nagger remembers her Papa like this: 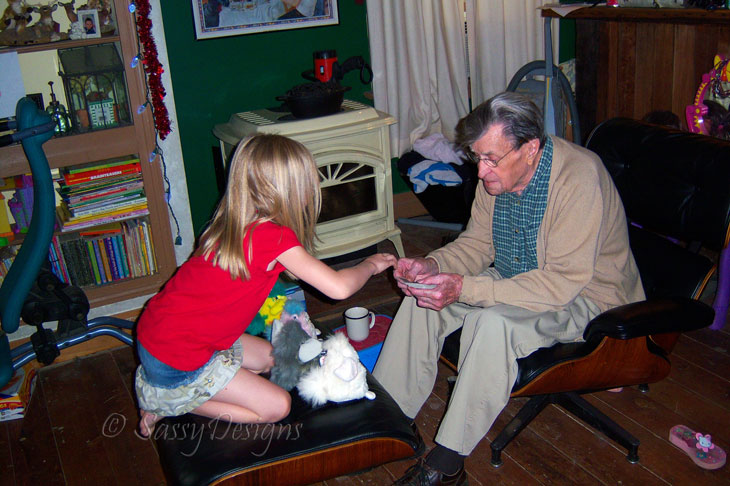 We emptied out my FIL’s studio apartment, right into our living room: 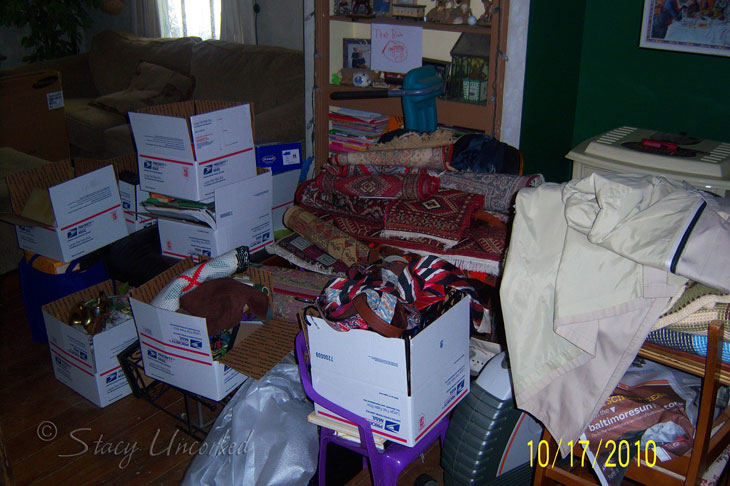 It’s sad when someone’s belongings are reduced to random piles.  We haven’t had the heart to go through any of it yet, but we’ll get there.  Meanwhile our living room will have to resemble a bad episode of Hoarders.

We are waiting for that dreaded phone call – since hubby missed almost all of last week at work, he can’t do the every day visits this week but is planning to drive down there this afternoon to check in on him.  I’ll keep you posted.  My FIL doesn’t want any fuss or fanfare when he does cross over – he just wants the three of us to bury his ashes in the cemetery plot he purchased years ago.

He does, however, want us to ring a Ship’s Bell eight times – the ringing of the ship’s bell could be used to warn other vessels in inclement weather, but their most popular use was to signal each half hour of a typical four-hour sailor’s watch duty. In fact, striking the bell eight times at the end of the watch gave rise to the term “Eight Bells,” which became an euphemism for saying a sailor had died (his watch was over).  My hubby and I are ordering an official brass Ship’s Bell just for the occasion – we’ll have it engraved with his name and keep it with his Navy photos and medals, and my hubby wants to get another one to have engraved and permanently mounted at his dad’s grave-site.

Let’s move onto something less sad, shall we?  Over the weekend the hubby brought home as a ‘surprise’  – a 40-inch HDTV.  I’d been trying to talk him into one for quite some time, but we’ve always opted to get something we need rather than something we want.  I think he finally started getting the itch when we were enjoying my sister and her hubby’s HDTV whilst in Iowa this summer.  Of course now that I rearranged the furniture to make everything fit since a friend gave us his couch and love seat, I have to do some more reorganizing.  Right now the new TV is on a bar table next to the old TV wall unit (and old TV).  I’ll have to start shopping for a new/improved wall unit or a simple TV stand so we can burn the old one that’s fared us well for 10 years, but seriously needs to go.  I smell a burn pile coming.

Meanwhile, Princess Nagger has been enjoying playing in the box the TV came in more than watching her shows on the bigger TV – but she does love how iCarly is larger than life. 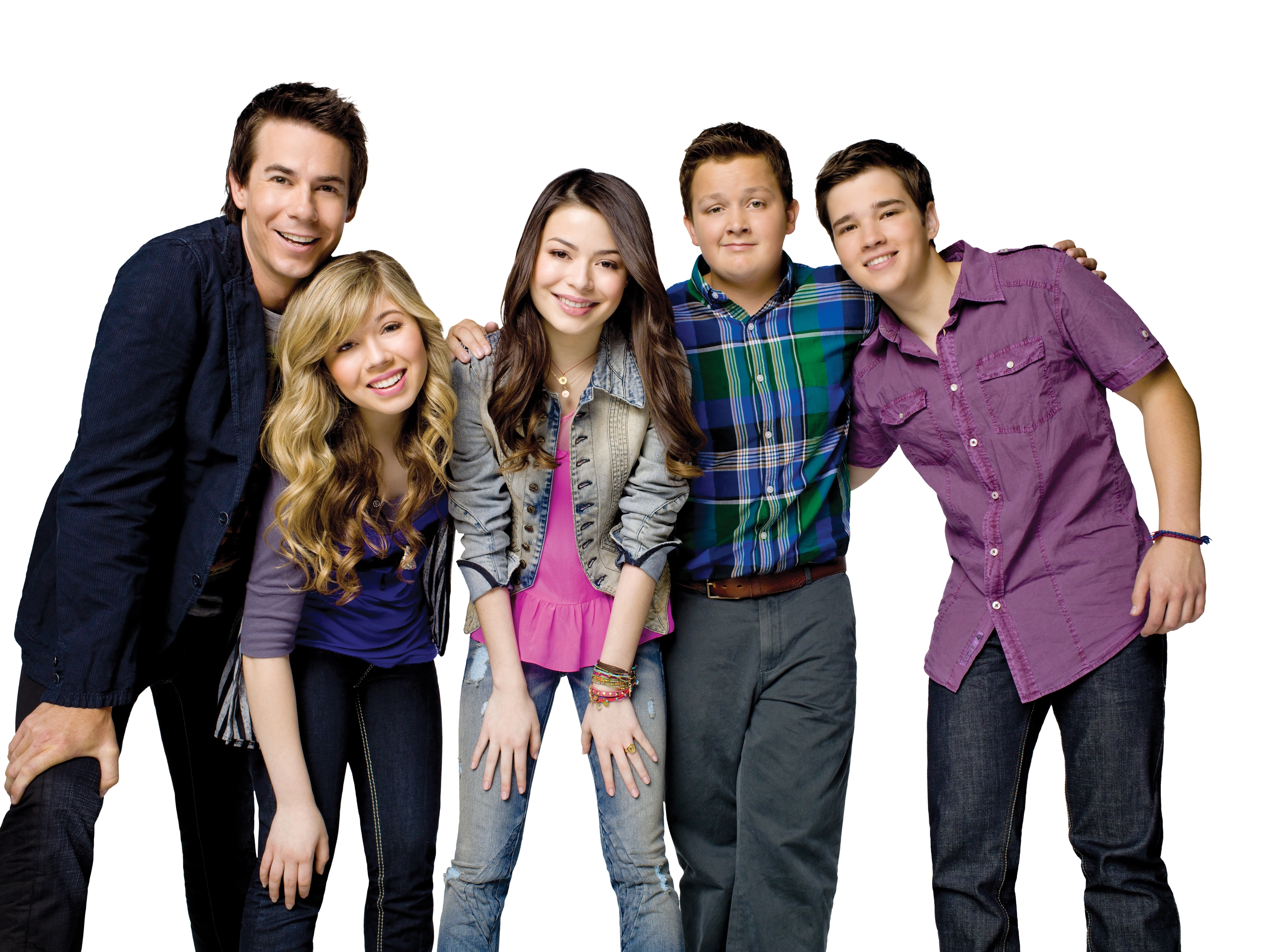 Whenever I talk about visiting my family in Seattle, Princess Nagger wants to make sure we go to downtown Seattle so we can meet Carly, Spencer, Sam and Freddy in person.  I haven’t broken the news to her that they’re not actually in Seattle.  She’ll probably figure that out right around the time she figures out the whole Santa, Tooth Fairy and Easter Bunny scenarios.  Hopefully not for a long time.

Now that we officially have HDTV, we’ll have to upgrade our satellite service and get an HD DVR – we might end up just adding a box and moving the current box to a TV in the guest room, since I have 80% of the DVR filled with recorded stuff – some mine, some Princess Nagger’s.  If they swap the box, we lose the recorded programs.  That would not make a happy Princess Nagger.  She has every episode of Dinosaur Train recorded, along with all things Dinosaur, plus some random hours of iCarly and Cyberchase.  I think her recorded stuff actually takes up about 60% of the DVR at the current time.  She watched me set up stuff to record and figured it out all by herself.  It cracks me up when I check out the ‘list’ and see what she’s decided to ‘save for later’.

Fall colors are finally starting to show up here in our neck of the woods: 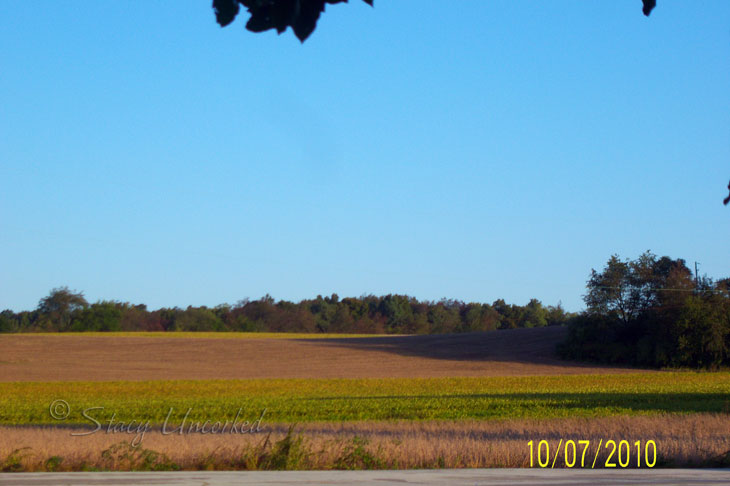 They’re slowly getting to the vibrant status that I love.  When we were down at my FIL’s retirement community last week, this stunning sight was awesome to behold: 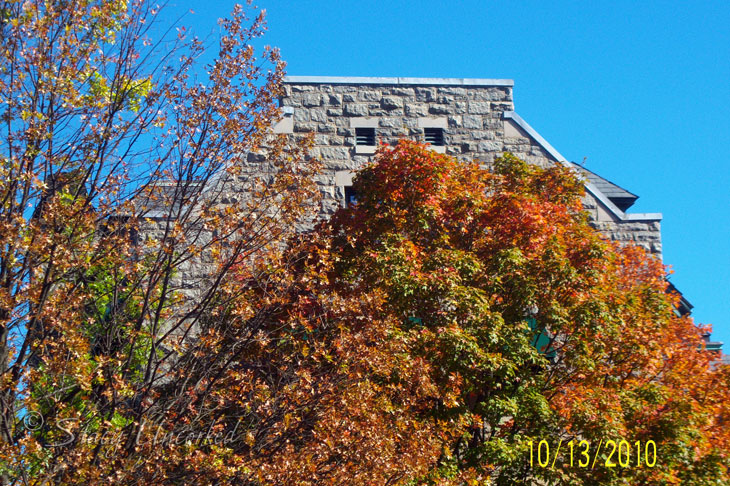 I love fall!  That’s it for this edition of RTT –  head on over to see Keely, who looks great in fall colors and is the coolest ‘Un-Mom‘ I know.