It’s hard to believe this is the last week of July!  Exactly one month from tomorrow Princess Nagger starts school.  The future Paleontologist has asked for a specific backpack and lunchbox for her Back To School mode: 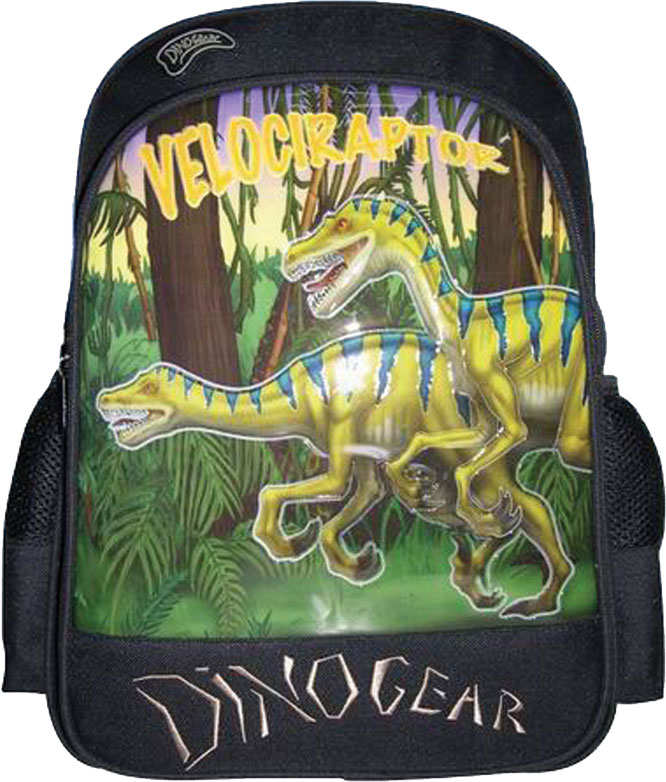 She has boycotted the Disney Princesses and anything pink, purple or girlie.   The company that sells the above also has T-Rex, Ankylosaurus and Triceratops, but according to Princess Nagger those are boring.  So it has to be the Velociraptor.  Wish me luck.

My sister has the coolest dinosaur pop-up book ever. 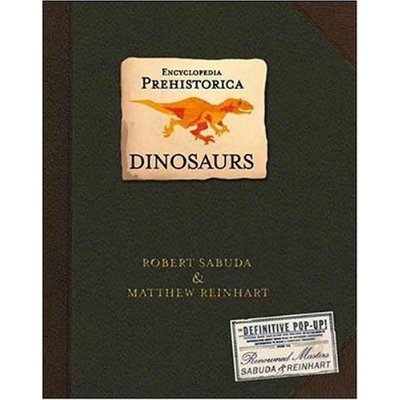 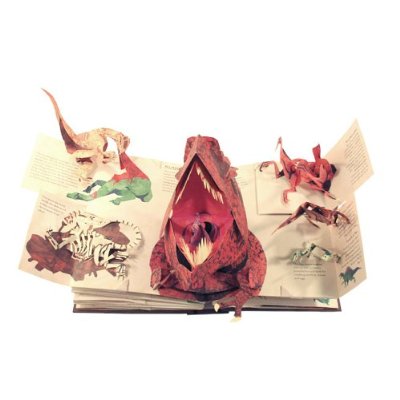 I had never heard of Robert Sabuda or his awesome pop-up books, but when I saw the one my sister has, I decided I needed to get one for Princess Nagger for her birthday coming up in November.  So I hit eBay and found one really cheap, bid, won and paid for it while on vacation.  When I got back, the seller sent me shipping info, then a few days later refunded my money.  And listed it on Half.com instead.  So I found a different one from a different seller.  And it came today – like this: 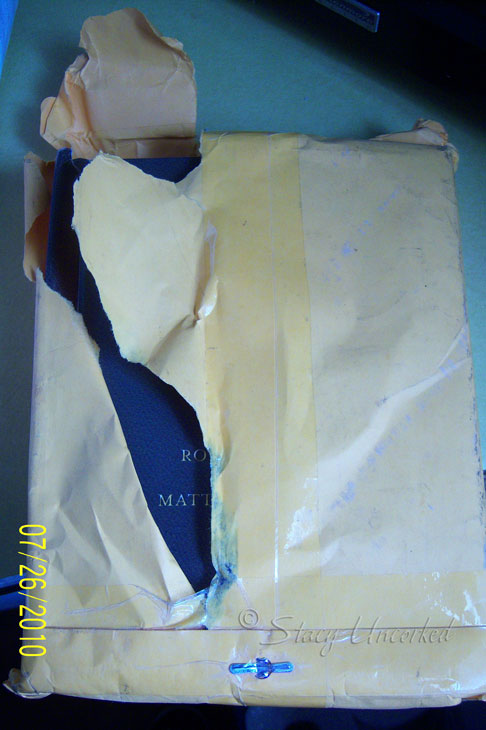 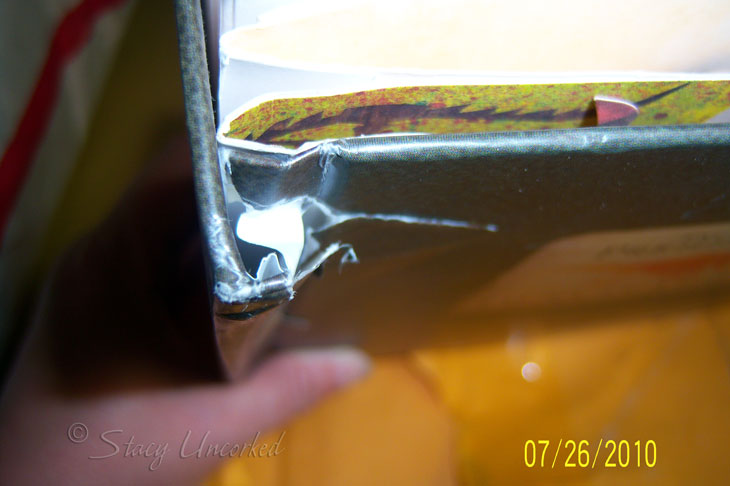 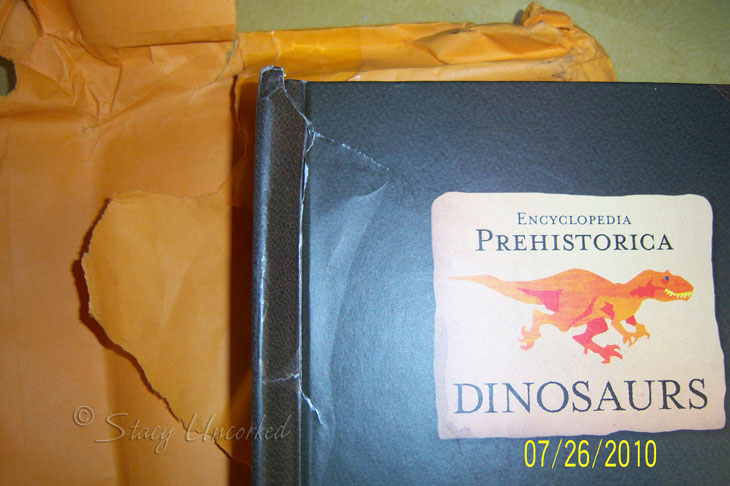 It was crammed into an ordinary envelope so of course it was damaged during shipping.  No padding, no protection of any kind.  I don’t understand sellers that can be so careless with something like this.  I’m sure Princess Nagger won’t care, but I do.  I’ve emailed the seller so we’ll see what she has to say for herself.

Remember this picture from our vacation? 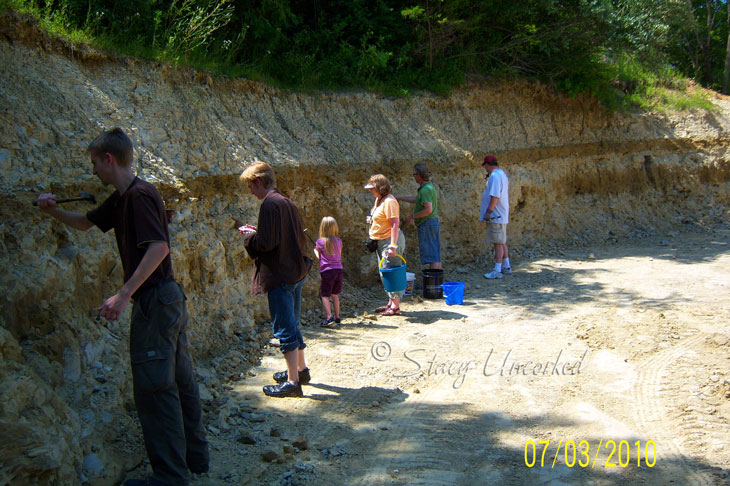 That was the gang digging for geodes at a geode mine in Keokuk, Iowa.  We had to stop and ask for directions at one point (which had the locals looking at us like we were crazy to want to pick up some geodes) because we started off in this area for our search: 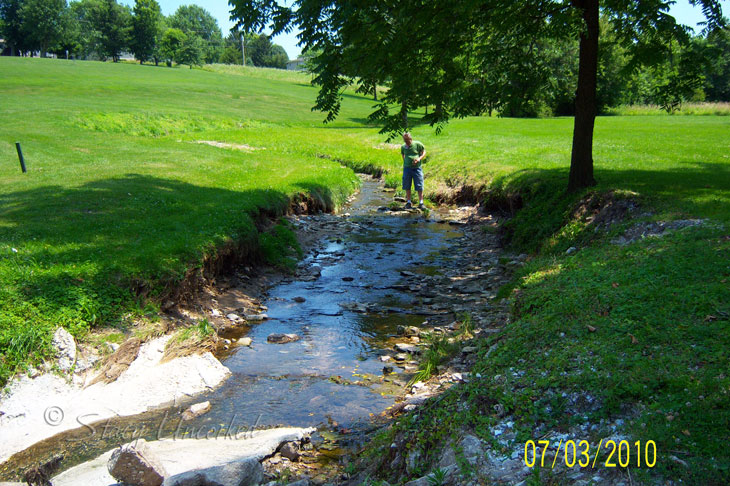 From where I was taking the picture, there was a 6 to 7-foot mostly vertical bank down to the stream.  My sister, Princess Nagger and I were looking for geodes near a bridge when I found a few promising ones, and decided it would be a good idea to climb up the embankment to find the guys and see how they were doing.  As I reached the top of the embankment, my foot slipped and I started sliding backwards, my geode loot started to roll away from me as I wildly grasped for clumps of grass to keep me from falling into the stream (though it might have been a welcome dunking, since it was a very hot day).

I tried to regain my footing and grab onto the escaping geodes, I called out to my sister and brother-in-law:  “Save the geodes!  Whatever you do, save the geodes!”  Of course that resulted in my sister bursting out laughing.   A few scratches, a couple of bruises, and a small dent to the ego – but the geodes were safe.  Then we headed off to the actual geode mine and had fun (and a few blisters from our inept attempts of using the claw end of hammers to dig them out of the clay).  We spent the next day cutting about 75% of them open with a ground pipe cutter, and only brought home 1/4 of our ‘haul’ (next time I won’t let hubby be in charge of divvying them up with my brother-in-law): 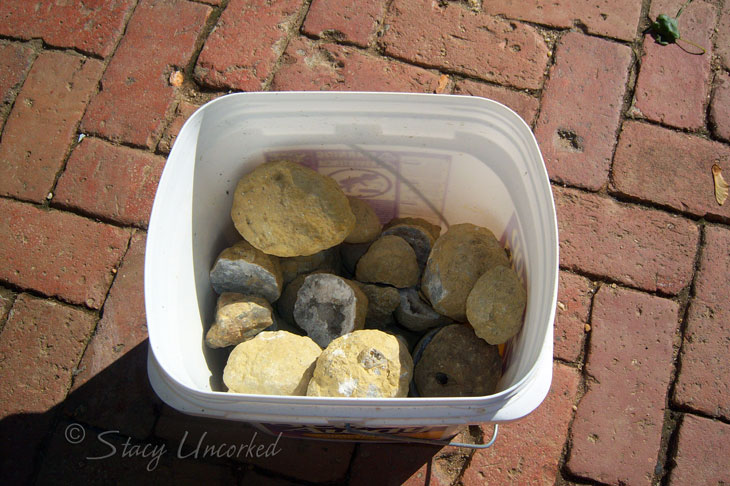 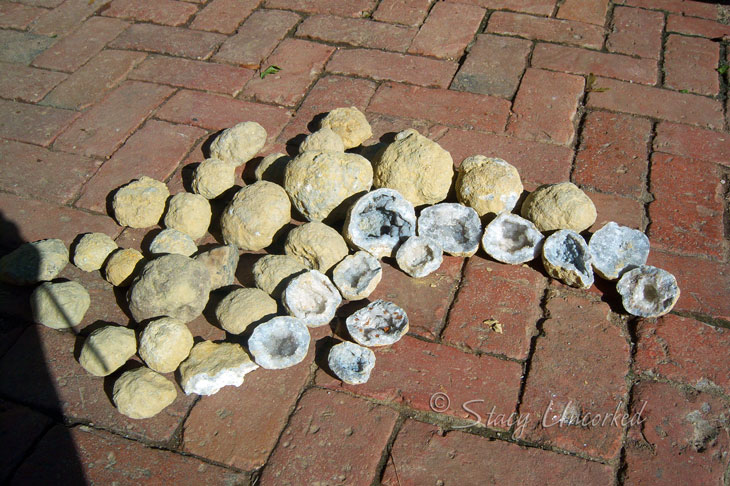 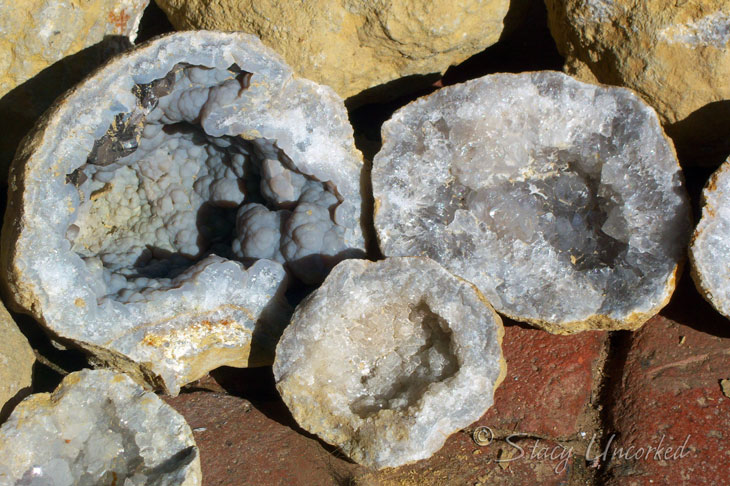 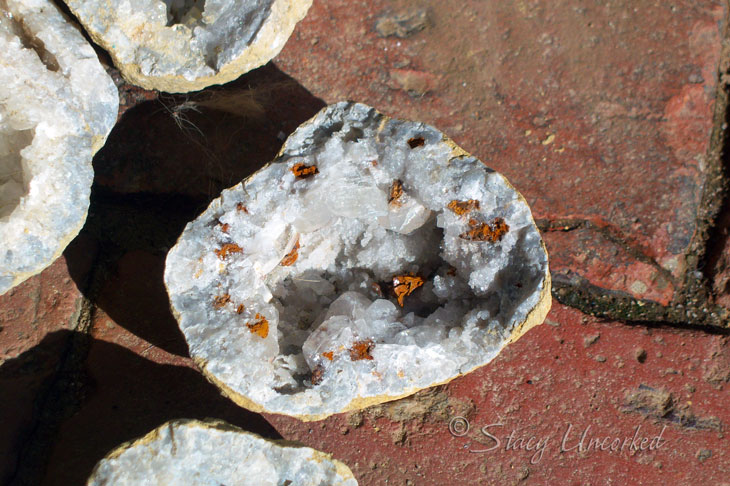 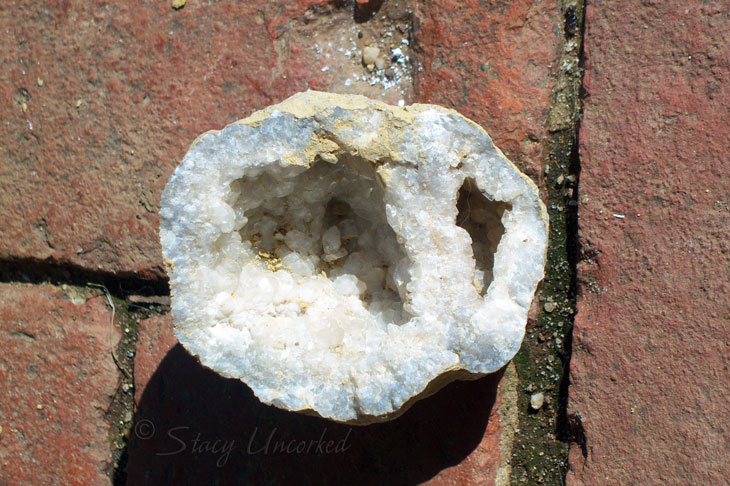 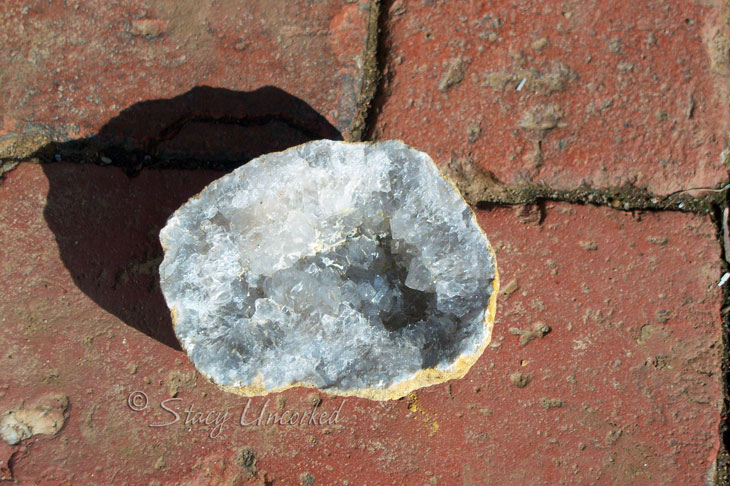 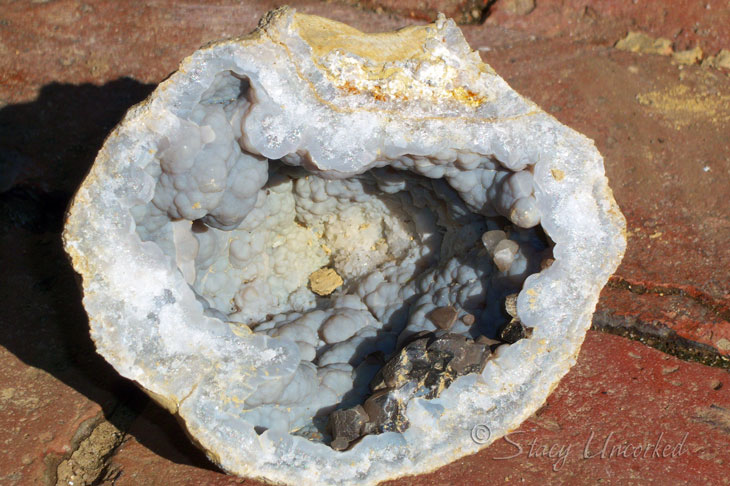 Pretty cool, aren’t they?  We’re going to figure out how to polish them up all nice – stay tuned.

On the way home as we crossed over the Mississippi, I spotted a ‘Scenic Overlook’ sign and decided to stop to get some pictures of the ‘scenic’ part, assuming it would be of the Mississippi River.  This was the view from that ‘scenic’ overlook: 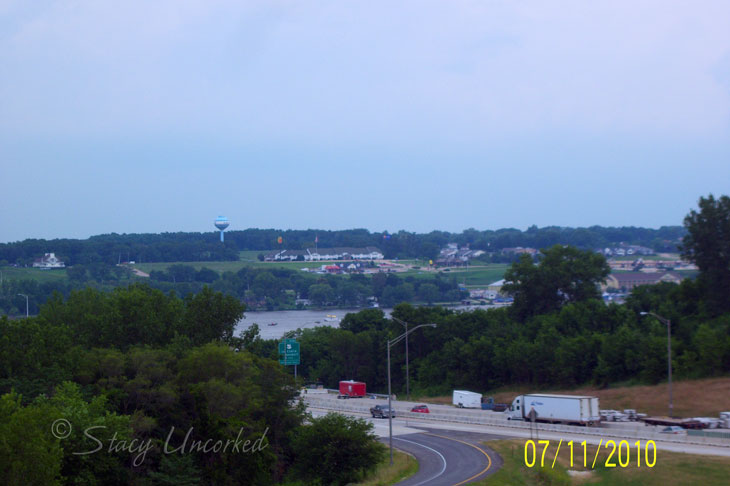 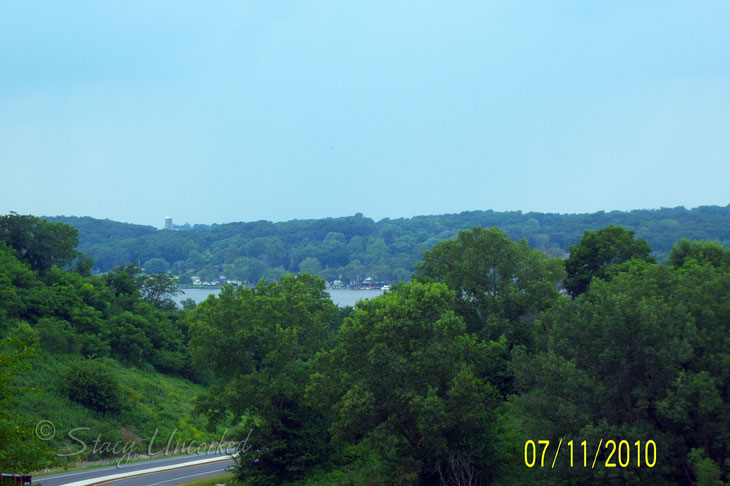 Not quite what I had in mind.  At least the informational sign at the overlook was interesting, and Princess Nagger was happy to pose for the camera: 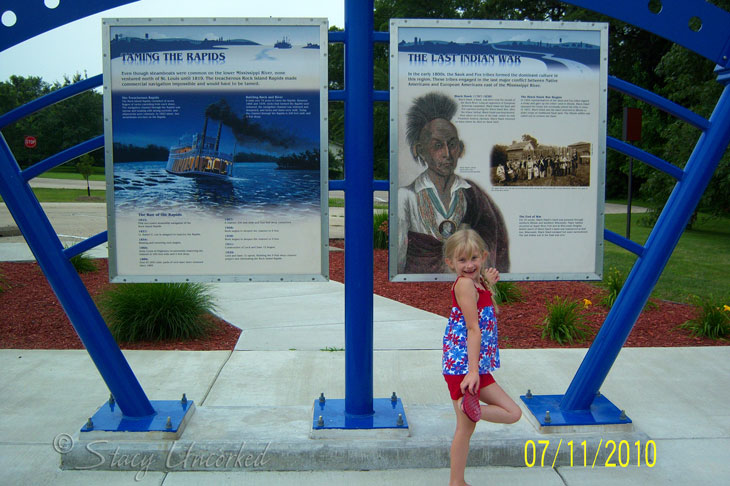 At a different stop, we saw the biggest moth ever.  At first Princess Nagger thought it was fake, so she poked at it, and jumped back when it moved.  I’ve never seen a bright orange moth, let alone a ginormous one: 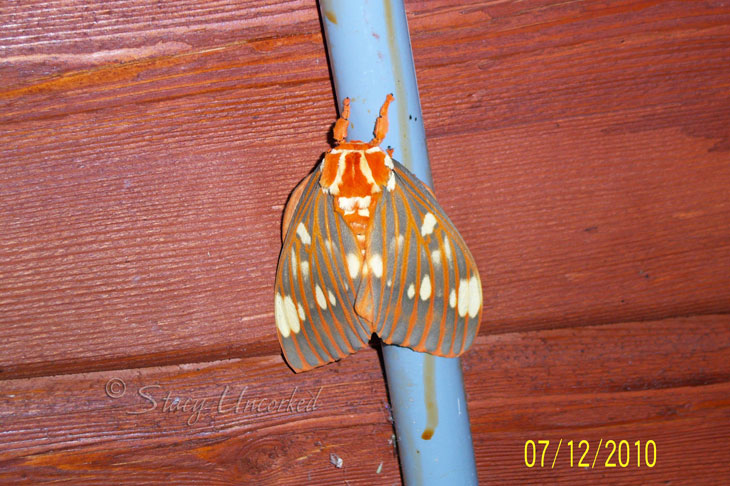 Hubby held a lighter up as I took a picture you can see its size in comparison.  Ironically the lighter was orange, too: 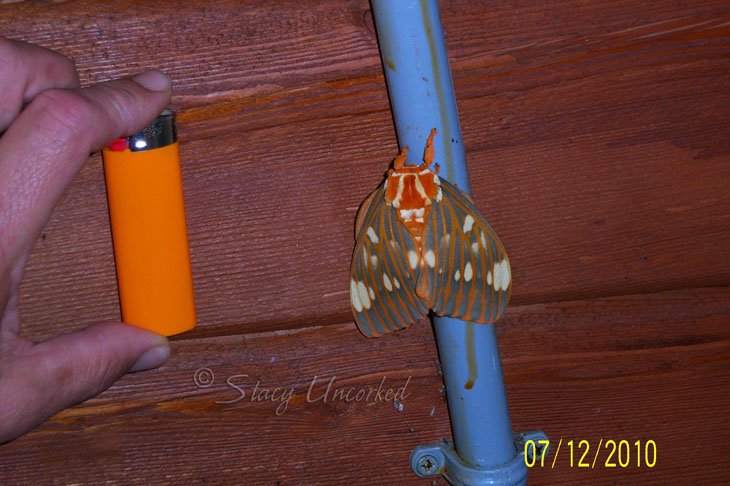 Told you it was big.  I’m just glad it didn’t freak out and dive bomb us over Princess Nagger poking it, hubby invading its space with a lighter, and me moving in a little close for pictures.   And I’m glad Princess Nagger didn’t ask if we could bring it home.

That wraps up this week’s jam-packed Random Tuesday Thoughts – head on over to see Keely The Un-Mom for some fun randomness!