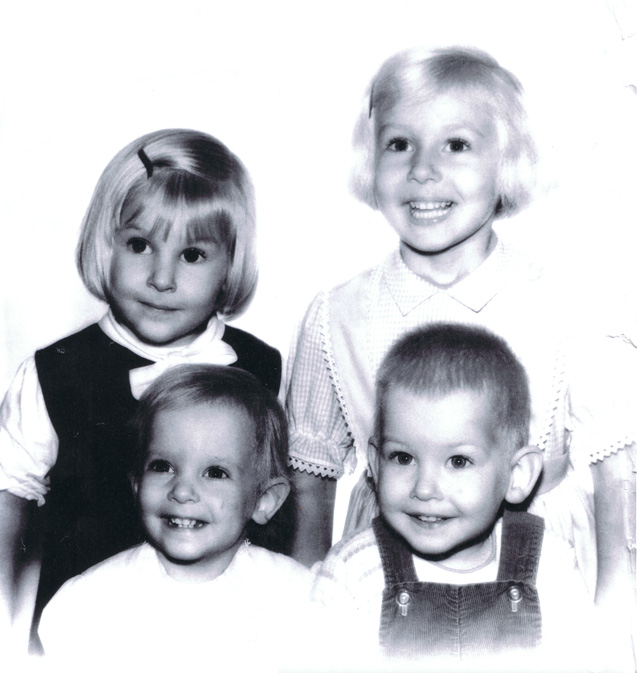 Sometimes I feel sorry for my hubby who grew up as an only child.  He can’t seem to wrap his head around the bond that happens between siblings.  Growing up in my family, there are four of us kids.  We’re all only one year apart (well, except the twins, who are only 7 minutes apart) so there’s always been a close bond between us.   Also growing up, my dad had gotten rid of our television while we were young, because he didn’t want us to be unduly influenced by ‘bad TV’.  So we had to fine tune our creative skills and keep ourselves entertained.

We would come up with random games to play – my brother and I created our own game we called ‘Laugh Your Head Off’.  We’d take turns and make goofy faces or antics to egg the other on into uncontrollable laughter.  We’d spend hours laughing and being goofy.  Since the road in front of our house was ‘Typical Suburbia’, we were allowed to ride up and down the entire block length.  We would draw chalk roadways out front and pretend to be driving cars, or tie a wagon to the back of our bikes and pretend to go camping.  My mom was pretty cool about the fact we’d actually take blankets out there as tents, and didn’t give us too much of a hard time when we’d bring them in all dirty with the corners showing obvious signs of the wood we used to ‘stake’ them into the ground.

My brother and I would try to get my two sisters in trouble – but my parents were smarter than we gave them credit for, and our plans always seemed to backfire on us.  That didn’t slow us down or stop us, though.  Things changed when my younger sister decided she didn’t like how strict my dad was and ran away two weeks before her 16th birthday, never to return.  I was the first one of us to officially move out on my own when I was 19 – my older sister and younger brother moved out a few years later and became roommates in their first apartment.

The camaraderie between us never changed, though my younger sister chose paths that would take her to bad places and bad marriages, and me being a combination of the Second Born and Middle Child (I know, quite the combo!) I searched until I found her and she and I formed a bond that was previously absent during our childhood.  I took great pleasure in being “Aunt Stacy” to her beautiful daughters and still have a close bond with them to this day, even though it is a long-distance one.

The bond between my brother and I and my older sister and I remained close, and there was never an event or a celebration that we didn’t include each other in.  We remained close as we ventured into adulthood.

When I moved to Pennsylvania 13 years ago this July, the original thought was that it was only going to be a short time.  One or two years at the most.  My then boyfriend now hubby grew up in this area, and his father was deathly ill, so we decided it made more sense to actually move here since we didn’t know how long it would be until he passed away, and didn’t want him to be alone.  My hubby’s mom had passed away from cancer many years before.

My father-in-law just turned 88 and is still going strong!  I like to tease my husband about the fact that his father is the same age my grandfather would be if he were still alive today, even though my hubby is only 5 years older than me.

His mom and dad started very late in life – because they were never planning on having children at all, but my hubby decided to thwart those plans.  Hence the reason he was an only child.  The bond between he and his dad has grown ever stronger over these years, my hubby is thankful we made the decision to move so his father’s final years will warrant some great memories.

Because of the physical distance between myself and my family, the strong bonds that once were have slackened off quite a bit.  None of us are really ‘phone people’, so we rarely call each other except for special occasions.  My older sister and her family moved to Iowa a few years after I moved to PA, so we ended up forming a stronger bond than we had when growing up as we’re both pretty much in the same boat being ‘separated’ from our parents and siblings.  We’ll chat on the phone at least once a month – and make up for the time passed by being on the phone with each other for well over two hours.

In 2-1/2 weeks we’ll be hitting the road to go visit my sister in Iowa – you can bet there will be many sleepless nights with us chattering long into the night as if no time has passed since the last time we were able to spend time together (3 years).  I can’t wait.  We’re both married to Engineers so at least they can empathize with each other while we commence with our magpie ways.

Next year we’re planning a cross-country month-long road trip so we can visit friends scattered along the way between here and Seattle, then spend time in Washington State with my parents, siblings, aunts, uncles, nieces, cousins, etc.  I wonder how much trouble my brother and I can cause during that visit.  I can’t wait for that, either.

Do you have siblings or are you an only like my hubby and Princess Nagger?  If you do, do you share a special bond with your siblings?

This Spin Cycle was brought to you in part by Jen, whose bloggy friendship creates a special bond all over, and happens to be Sprite’s Keeper.  Head on over to the other Spinners and find out what kind of bonds they have – you’ll be glad you did.

25 thoughts on “The Sibling Bond”