I’m late with my randomness this morning because we had a friend in crisis over last night talking into the wee hours of the morning.  Wait, is it morning already?  I think I better load up on coffee.

Sitting out on the back porch chatting the night away, I discovered that while mosquitoes find me to be a tasty snack (hold on while I scratch another bite) they steer clear of the hubby.  Apparently his love of hot sauce and garlic has the mosquitoes turning their noses up and flying in the opposite direction.  Towards me.

For all the mosquito bites I have to suffer with during this time of year, at least the ticks have opted to steer clear of me.  Hubby hasn’t been so lucky.  He’s already plucked three of them off within a couple of months.  It’s okay if you want to utter an “Ewwww!” right about now.  I did.  Too bad they don’t make Advantage for Two-Leggers like they do for Dogs and Cats.

Yesterday was the first day of Summer.  Mother Nature thought it was much earlier this year, because we’ve been having hot hazy and humid days: 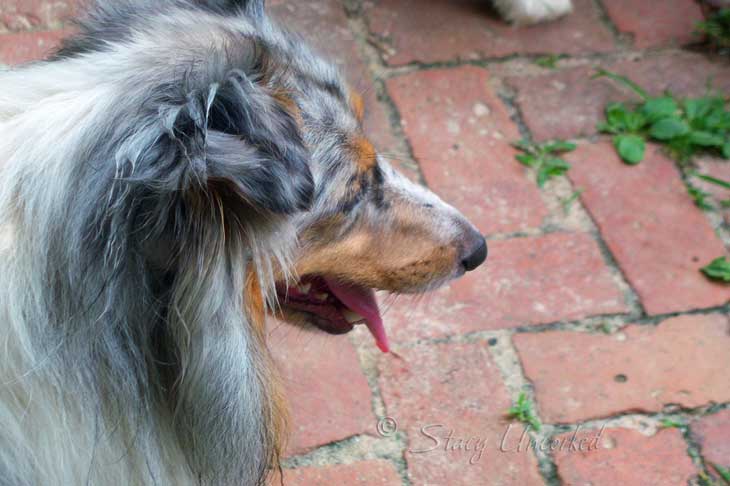 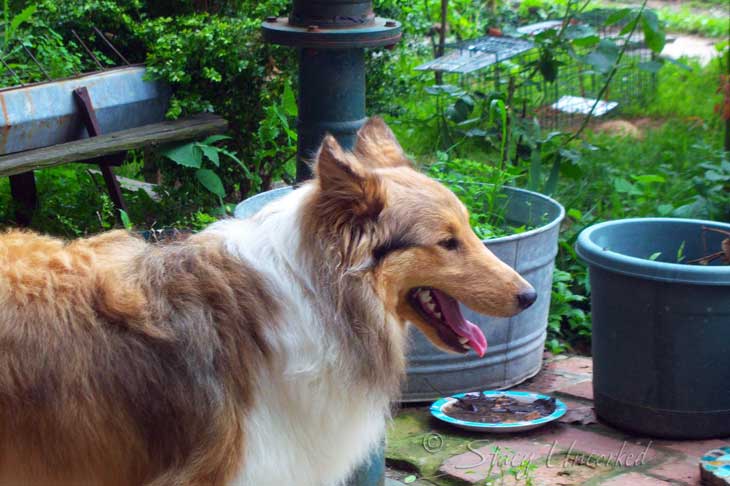 The Bully Frog has a co-conspirator.   We discovered there are not one, but two Bullfrogs in our pond.  The original hanging out doing some fishing: 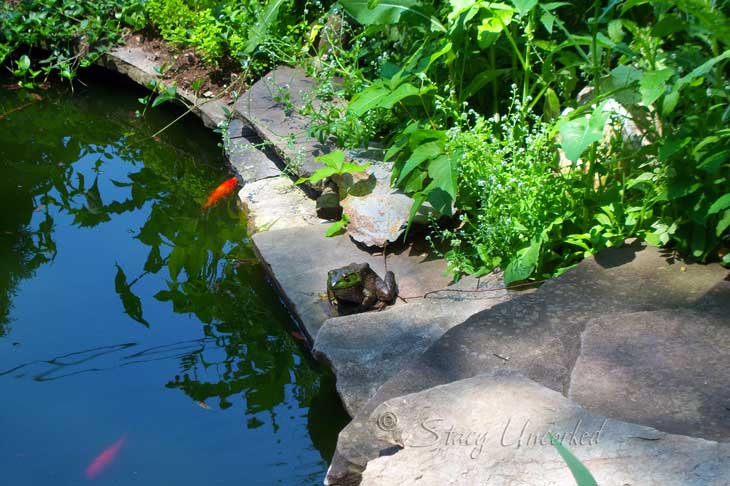 The second one trying to blend in with the plant life:

Can you see it?  Almost at the center of the shot.  In another “Where’s Waldo?” moment, see if you can pick out the dove defying the bird-loving Bully Frog: 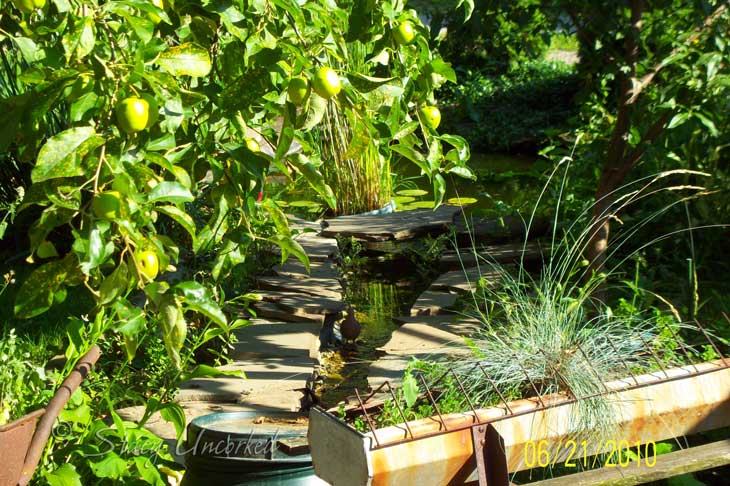 He/She picked out a good time to get drunk a drink, because usually the bullfrog is pretending to be a rock halfway up the stream waiting for his next unsuspecting meal.

The Fruit Cocktail Tree is loaded with growing fruit: 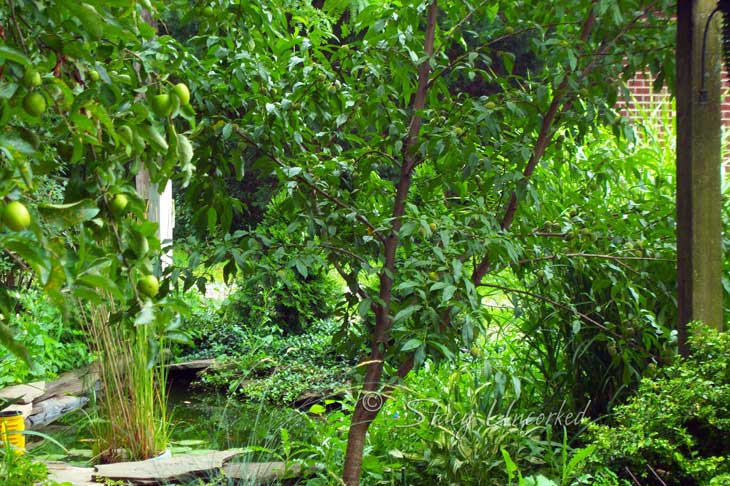 You can’t see them very clearly because they’re all little green balls right now.  But trust me, they’re there.  Speaking of little green balls (get your mind out of the gutter!), Princess Nagger was pretending to feed her inflatable Pteranodon on the young grape vines: 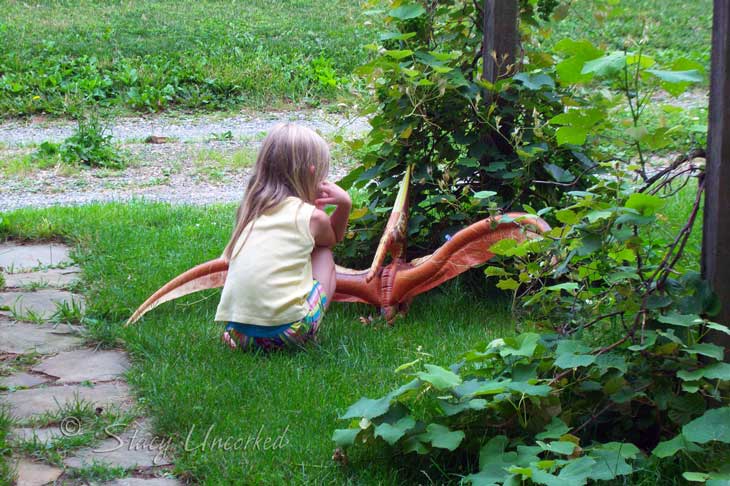 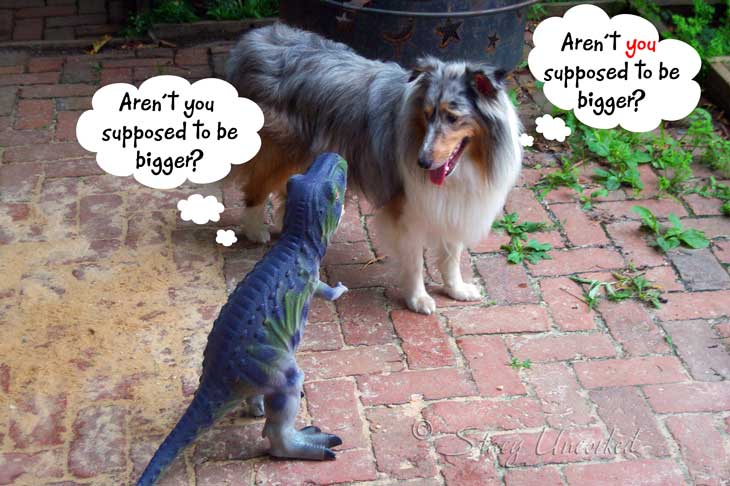 And finally, the weekly shot of our pond: 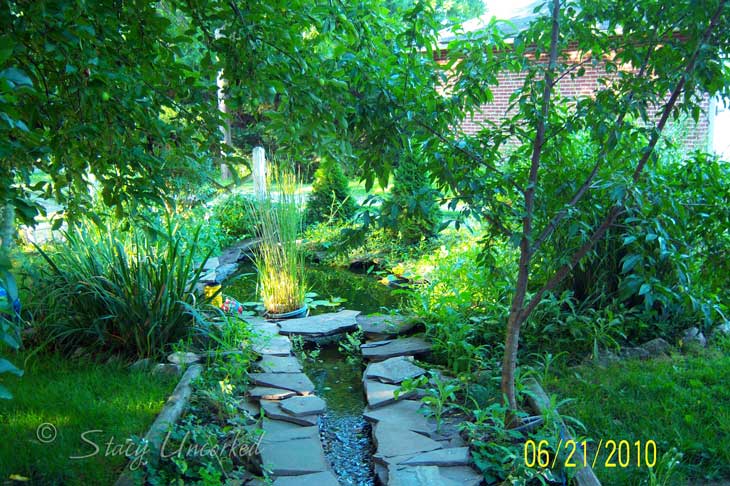 Hubby eliminated some of the wildly growing weeds that were running rampant by the corner fence and trimmed down the bush in the corner to let in a little more sunlight.  Should be interesting to see what a jungle the yard will be when we get back from vacation.  We head out on Sunday to drive to Iowa, stopping in Dayton, Ohio just to split up the drive.  If any of you are in that area and would like to meet while we’re passing through, let me know.

We’ll be invading my sister’s space for two weeks – it will be our first visit to Iowa ever (except for quickly driving through on the move out from Seattle to PA) so Princess Nagger is really looking forward to checking out ‘Corn Country’.

This concludes this foggy-brained edition of Random Tuesday Thoughts.  While I get more coffee, why don’t you head over and visit Keely at The Un-Mom for some fun randomness and get your own Random on!

Vaccines and Birthdays and Funnies – Oh My! Random Tuesday Thoughts

Hello Tuesday! And yes, I’m late yet again, working long hours I’m getting a little discombobulated. Not as discombobulated as I was over the weekend, though – I got my second covid vaccine on Friday, and was down for the … Continue reading →