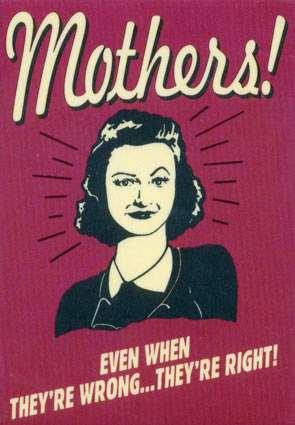 Mother’s Day can be sort of a sore subject around our house.  Hubby is a literal person, and can’t grasp the idea that Mother’s Day isn’t acknowledged only by the children of the mother, but that the spouse should can show their appreciation for the mother of their child or children or step-children or whatever for being the mother the other 364 days of the year.

That’s what it really boils down to.  A mother’s job is thankless (and yes, a father’s job can be thankless too – but we’re talking about Mother’s Day.  We’ll talk about Father’s Day next month).  Mother’s Day gives you the opportunity to express your appreciation to your mother or the mother of your children and give them one stinkin’ day of the year to do even small things to show your appreciation for all they do as the mother.

As I was attempting to formulate words for this post, Mr. Interruptus broke my concentration the subject of Mother’s Day came up with the hubby.  He wanted me to pick out a day next week that Princess Nagger can take me to dinner.  Next week.  Because it’s her ‘job’ as the kid to celebrate Mother’s Day with me as her mother.  Sometime next week.

I must have given him a look that spoke volumes (and the message wasn’t received all that clearly) because the following conversation took place:

HH:  “I’ll pay for it, but you’re her mother so she should take you out to dinner for Mother’s Day.”

HH:  “Only if the Nagger says it’s OK – it’s your day, so it should be her doing something special for you.”

I semi-patiently explained that the day – on the actual Mother’s Day – needs to be special.

HH:  “What, you want me to cook you breakfast or something?”

Me:  “It’s not what you need to do, it’s that on Mother’s Day it would be nice to show your appreciation for the mother of your child – make her feel special on that day.”

HH:  “Well, that’s why I want you to pick out a day next week to have The Nag take you to dinner and I’ll pay for it.”

Me:  “That’s a nice gesture, but that’s next week – what about Sunday?  The actual Mother’s Day?”

HH (grinning):  “Well, that’s what the dinner is for.  And I know I need to pick something up for you too.”

Me:  “It’s ironic how we’re having this conversation right when I’m trying to figure out how to post about this exact thing for the Spin Cycle tomorrow!”

Me (grinning from ear to ear):  “You bet I am – and you can bet I’ll be including this conversation in it, because it’s just too good to pass up to prove my point about how literal you are!”

Growing up us kids would make sure we did something special for my mom on Mother’s Day – usually orchestrated by my dad when we were younger, then schemes formulated amongst us kids as we got older.   My brother does a great job orchestrating a special day for my sister-in-law, recruiting their 8-year old twins into the festivities.  My sister has her husband well trained to make her day special, and her teen boys seem to know how to help make the day special, too.

My hubby’s parents weren’t ‘holiday people’ – they did not make a big deal out of holidays.  Ever.  The occasional birthday party, maybe.  Early years Christmas, sure.  But as my hubby grew older, their aversion to holidays grew greater and there were less and less celebrations.  Hubby has no siblings, so no one in that arena to set him straight.  It’s possible that Mother’s Day is a bittersweet day for him because he lost his mom to cancer when he was just 18 years old.  So until I came along and bore his child, he had no reason to celebrate Mother’s Day.

He ‘s a work in progress.

This will be the seventh year running – and I’m determined to set him straight on making that day special.  Though I shouldn’t have to.

That’s the point.  I shouldn’t have to point out that us mother’s need to feel appreciated, even for one day.  Like on Mother’s Day.

Does anyone else have a crazy spouse or significant other that tends to think that Mother’s Day is only for the kids to celebrate with the mom and it doesn’t really need the husband/spouse/significant other to participate in making that day special?

This Spin Cycle was brought to you in part by Jen, who is an appreciated mother and Sprite’s Keeper.  Head on over and check out the other spinners – find out what Mother’s Day signifies for them!

Mother’s Day is Sunday – where is the year going??  That’s right, I keep forgetting not to blink.  It’s been an interesting process to get the hubby to understand that Mother’s Day isn’t the sole responsibility of young children to … Continue reading →

If you read my post on Monday, you know that this year’s Mother’s Day turned into one of the best.  Here are the main reasons why. A bouquet made of construction paper: It was in the shape of a circle, … Continue reading →

29 thoughts on “Mother’s Day – Why Must It Be So Complicated?”