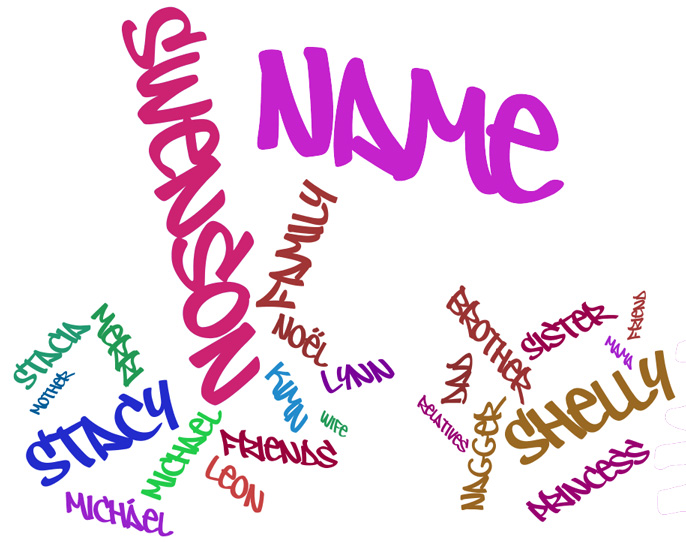 Our family is unique in that my parents got married when my dad was 16 and my mom was 15.  Apparently they thought they were from the era that that was more of a ‘normal’ thing to do.  They had four kids in three years – by the time my mom was 18 and my dad was 19, they had one 2-year old, one barely 1-year old, and their ‘surprise/accident’ – twins.

For being so young, my parents were very creative when naming us kids.  They decided they wanted to give each of us one of their names.  My parents names are Michael Leon Swenson and Stacia Lynn Swenson – so when my older sister was born, they named her Kimn Noël – adding the ‘n’ to the end of Kim for reasons unknown, but her middle name is ‘Leon’ spelled backwards.  Clever, no?

My younger brother and sister – the ‘accidental/surprise twins’ showed up one year and three days after I was born.  Naming my brother was a no-brainer – he got my dad’s name with an additional “II” at the end.  My dad said he preferred to add the Roman Numerals at the end rather than a “Jr.”, because he didn’t want any Juniors in his family.  So instead they were often called “Big Mike” and “Little Mike”.  Yeah, that works better, doesn’t it?

My parents got creative with my younger sister’s name, too – instead of the traditional spelling of “Mary”, she got “Merri” (yes, with an ‘i’ not a ‘y’).  Why?  Because December is Christmas and quite “Merry”.  Ahem.  She also got my mom’s middle name, Lynn.

I was not only the second born, but the middle child technically speaking, since I was sandwiched in between my older sister and the twins (yeah, explains a lot about me, doesn’t it?  A double-whammy.) When I was born, my parents had planned on only having two kids.  I was a bit of a disappointment in that I was a girl and not a boy for their ‘final’ child.   You know that whole one boy, one girl, white picket fence ‘dream’.

My mom confessed to me recently that though they had considered naming me ‘Stacia’ after her, she didn’t want to ‘share’ her name with anyone – she was, after all, only 17, and ‘Stacia’ was not a common name.  In fact, her mom was planning to name her ‘Stacy’ when she was born, but at the time it was a popular French boy name, so she chose ‘Stacia’ instead.

They had planned on giving me the middle name of ‘Michel’, but when my dad filled out the Birth Certificate he accidentally wrote “Michael” because he was used to writing his own name on things.  My mom saw it, and wasn’t pleased that he had given me the middle name of a boy, so they added an accent mark above the ‘a’, spelling it “Micháel”.  That little mark makes a world of difference, no?

Since ‘Stacy’ was too close to ‘Stacia’, they wanted to keep the confusion down and called me ‘Shelly’.  In fact, from what I understand, on the original Birth Certificate ‘Shelly’ is written in parenthesis on it.  They were going to name me “Kelly”, but no matter how creative one can be, there is no possible derivation of either of their names that would result in “Kelly”.

So I technically have two first names – anyone who has known me from birth until 6th grade calls me ‘Shelly’.  Why 6th grade?  Because we went to a very small private school, and since there were only 6 kids in my 6th grade class, there was another girl named ‘Shelley’.  So she got referred to as “Shelley P.” while I got referred to as “Shelly S.”.  Poor other Shelley (with her name spelled wrong) – who wants to be referred to as pee?  You know how kids are – of course she got teased by utilizing the initial of her last name.

My sister Kimn spoke up and suggested to the teacher that they simply refer to me by my ‘real’ name, Stacy.  Had it not been for being in a small school/class and having another girl sharing my name, I probably would have gone through the rest of my life being called “Shelly”.  Well, I guess technically I do, since I do still get called “Shelly” by my parents, siblings, aunts, uncles, cousins, etc.  Which can cause great confusion to anyone who joins in on any family functions and only know me by ‘Stacy’.

Whenever I had to write my middle name out, I didn’t want people thinking it was a boy’s name, so I always spelled it different every time.  From ‘Micheal’ to ‘Misheal’, I never wanted to actually spell it as “Michael”, because I knew that for all the grief poor Shelley Pee got in school, I’d probably get razzed for having the middle name of a boy.

But now it actually comes in quite handy – I can spot junk mail right away when addressed to “Mr. Stacy Michael Swenson” and can simply add it to the burn pile without bothering to open it.

Then there are the people who try to throw that pesky ‘e’ in ‘Stacy’.  I always respond that I like the simpler things in life, therefore no ‘e’.  Or ‘i’ for that matter.  And it’s definitely not ‘Tracy’.  When I lived in Michigan I worked in a fairly small office – there were 13 of us in one large office space, with our cubicles separated by those short 4-foot partitions.  One of the sales guys in the office was named Dale – and for some reason, he always insisted on calling me Tracy.  For an entire year.  He would even leave notes on my desk addressed to ‘Tracy’, and I’d take them back over to him and ask him who ‘Tracy’ was.  He never seemed to get the hint.

Until one day, when he loudly yelled across the office “Hey Tracy!” and immediately I yelled back “Yeah, Chip, what do you want?” to which the other 11 people in the office burst out in peals of laughter, Dale’s face turned ten shades of red and he never called me ‘Tracy’ again.

Before Princess Nagger was born, I had already decided I wanted to name her so that her name had the same initials as me – and I gave her my (correctly spelled) middle name.  You know, because ‘Nagger” fits so well.  I researched first names and picked one out that was unique (at the time) and it’s been interesting to see how close to the mark the ‘definition’ of her name has been in her developing personality.

I love how Maureen (Island Roar) wasn’t given a middle name and picked one out for herself.  I also love how Gretchen (Second Blooming) came up with the name for her son.

How where you named?  Did you get named after a relative or someone else?  If you have kids, how did you go about deciding on a name for your kid(s)?