Today is the last day of Princess Nagger’s mandatory swim classes in first grade.  She’s very happy to have survived those eight long days.  She was dragging her feet going to bed Sunday night and again getting ready for school yesterday morning because she wasn’t looking forward to doing “you know what”.  But her attitude changed when she got home yesterday – I’m not sure if it’s because she only has one day left, or if she’s decided it isn’t so bad after all.  In fact, this week is ‘Turn Your TV (and all other electronics) Off Week.  So instead of watching her shows when she got home yesterday, she practiced her swim moves in the living room.

A much different attitude than when she got home from school one day last week on a swim day: 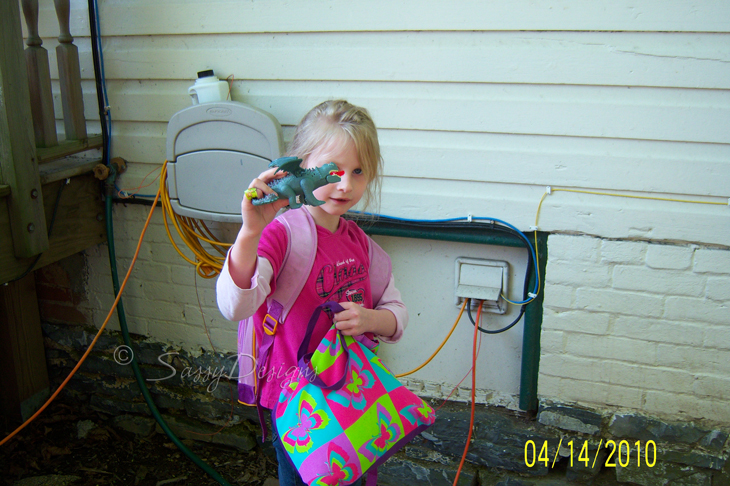 She was using her 3D dragon to convey how she liked swim class. It was the third day in a row, so while it was the last one for that week, she was still complaining that she wished they didn’t have to do them so many days in a row.  Now she claims she loves swimming.  I had figured by the end she wouldn’t be so adverse to sticking her head under water.  Oh, sorry, she just read that part and said:  “I’m still adverse to sticking my head under water.  But not by much.”

Last Thursday I did my bi-monthly grocery shopping – I’ve mentioned before I subject myself to a day at Wal*Mart since I do half the shopping there (it’s cheap) and the other half at BJ’s (bulk can be good).  When I pulled into the parking lot, I saw a prime spot ready and waiting.  Only it wasn’t really.  There was a lady standing by a cart that was protruding into the parking space as she was unloading her contraband into her truck.  Her hubby was on the opposite side doing the same (but he didn’t have the parking space on the other side blocked, because it was already occupied).  I decided to drive back around because her cart was almost empty, and she would probably be moved by then.

She wasn’t.  In fact, she was standing there chatting away to her hubby on the other side of the truck, with the empty cart taking up the empty parking space next to her.  I decided to wait and see how long it would be before she noticed someone was waiting.  After about five minutes, I realized I had my camera with me and decided to take a picture.  Wouldn’t you know it, that was the very moment she decided to move the cart out of the way. (I’m guessing her hubby may have noticed me aiming the camera and commented to her). 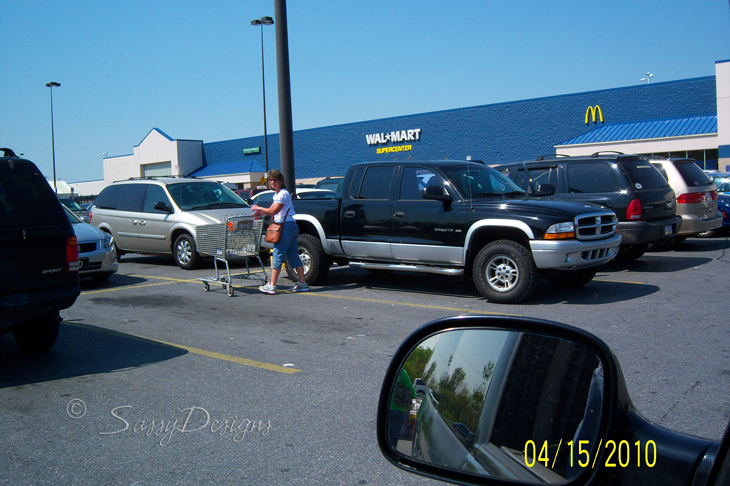 When she finally moved the cart out of the way, I pulled into the spot.  Since it was hot out, I rolled my windows partway down and put the sunshade in the windshield – which gave her time to get back to her truck before I got out of my vehicle.  She asked through the passenger window:

Walmart Lady: “Did you just take a picture?”

I couldn’t tell if she knew what a ‘blog’ was, or if she just thought I was crazy.  I’m betting the latter.

I did score at Wal*Mart that day, though – when I was checking out, the cashier was letting me know there was an awesome deal going on with some games (well, OK, at first she was talking to a friend of hers as she scanned my items, but I sort of butted in entered myself into their conversation).  They had some sort of clearance going on with games like Monopoly, Don’t Break the Ice, Gator Golf, Eureka, and some others I vaguely recognized.

But my ears totally perked up on the Gator Golf one, because Princess Nagger has been nagging bugging me to get her one.  $3.00 instead of $20.00?  (and yes, I did pick up 4 other games while I was at it – couldn’t beat the $1, $2 and $3 price tags on games that were normally $15-$20). Totally worth it.  Especially the shriek of glee and excitement from the Princess Nagger when she saw it: 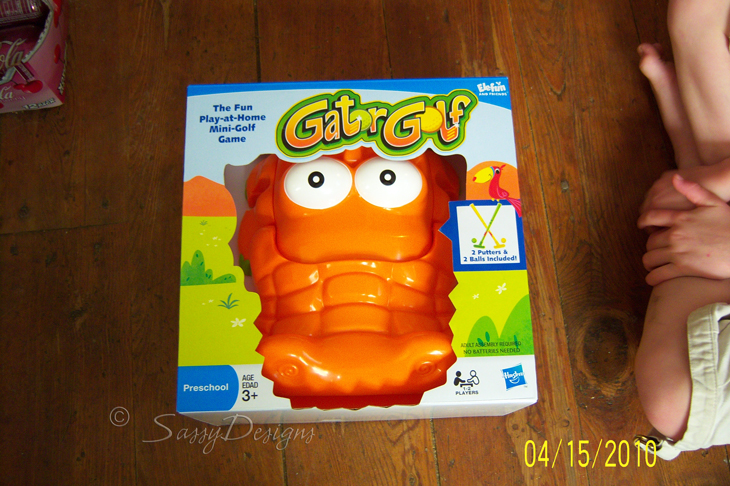 And had great fun playing with it outside in the warm weather: 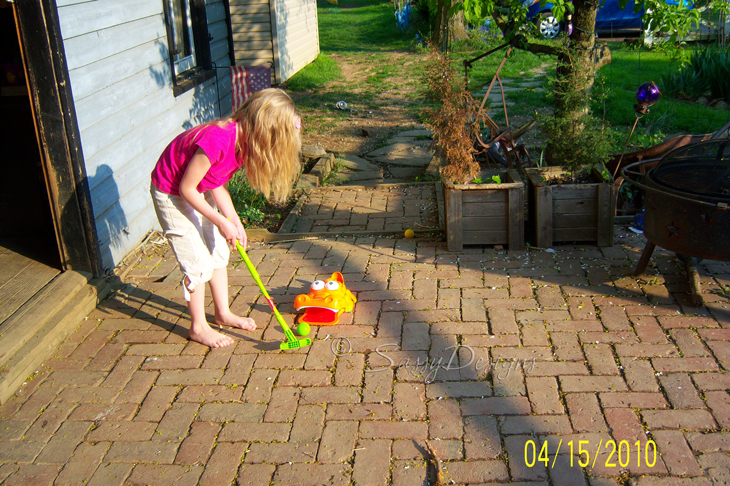 Since I’ve posted the pond progress each week, I’m going to keep doing that weekly so you can see the progress.  It was really warm last week, but turned cold again for the weekend (we even had a frost advisory overnight – hope my outdoor plants don’t get confused!).  So here’s this week’s shot of the pond.  Everything’s still growing nicely – except for the bare spots in the grass we’ll have to figure out how to fix with the dogs running through there constantly, and pay no attention to the weeds in the foreground that seem to be relishing the warmer temps: 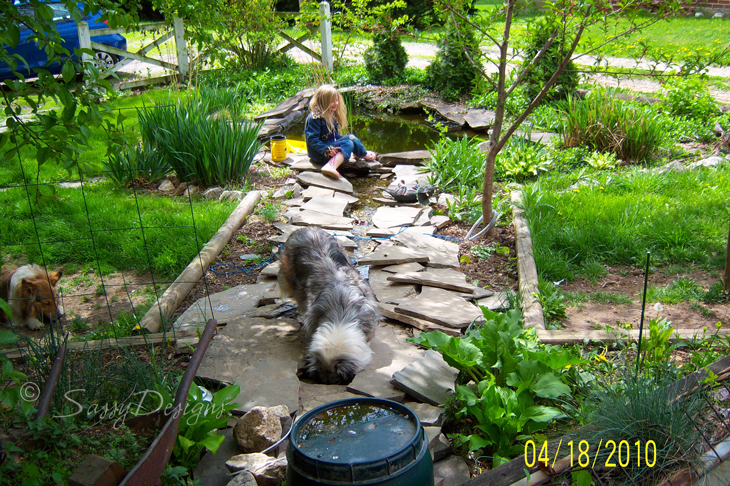 Hopefully it will warm up soon – and stay warm – so I can get out there and pull some weeds and see about planting some new grass.

Scrolling through the pictures looking for the ones to share this week, Princess Nagger saw the picture of the lone tulip I shared last week (and some pictures of other plants I didn’t share): 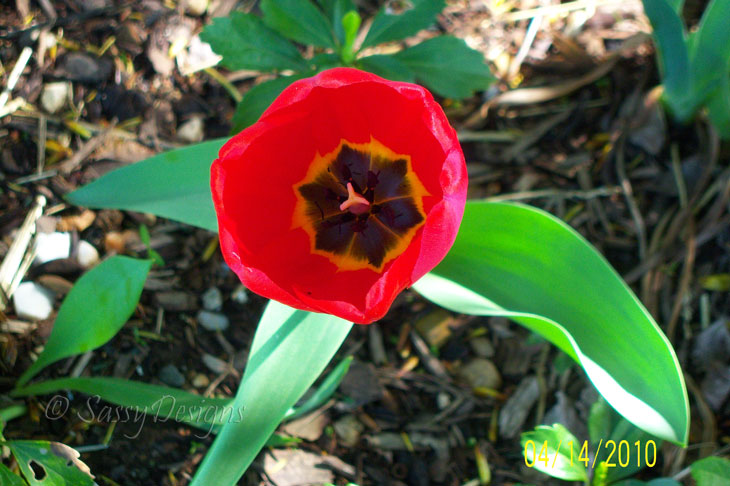 That’s it for me this week – head over and visit Keely at The Un-Mom for some fun randomness and get your own Random on!