I consider it my ‘guilty pleasure’ watching shows like Ghost Whisperer and Medium.   I’m intrigued by the fact that Medium is based on a real person and portrays her and her family.   Do I buy into that whole “I see dead people” bit?  Not so much.  But who am I to knock what other people believe?   I don’t, however, have patience for the people that call themselves psychics using their ‘gift’ to make money off of innocent bystanders, when in most cases it’s all a sham and a scam.

All that aside, I do strongly believe in “Mother’s Intuition” or the sixth sense that most mothers seem to have.   There are things we know that we don’t know we know.  It’s called instinct, intuition, a hunch, gut feeling, or sixth sense.  Intuition is an insight that comes to us out of the blue.

Legitimate intuition is sometimes also confused with everyday worries or fears, which might be motivated by anything from the news, to a comment made by a well-meaning friend, to your mother-in-law.

While some moms never question their inner wisdom, others may find they have to rediscover it.  It’s not like a switch you flip, trusting your gut is something you have to be conscious of.  Like a muscle you exercise whenever you struggle with doubt.  By the same token, you have to be careful not to over think a situation and truly just go by your gut instinct.

I myself had to ‘rediscover’ my sixth sense, my mother’s intuition, my gut instinct when Princess Nagger was born – since I had pretty much ignored it, which turned it into just another flabby unused muscle.  But when she arrived, it seemed that the dial was turned up just enough to remind me to utilize it when necessary, and it came in quite handy in one particular instance when she was about 3 years old.

I was sitting on the back porch steps one warm, sunny summer day watching Princess Nagger explore the back yard with the dogs while I was on the phone with a friend.  I noticed she was getting precariously close to the pond in her exploration, and called out to her to stay away from the pond.  My gut instinct was that since she’s so much like me, she’s going to want to do the exact opposite of what she was told.  Which was to move closer to the pond.

Which of course she did.

The next few minutes seemed like an eternity when in reality they lasted mere moments – Princess Nagger, delighted by the sparkling water as the sun reflected off the surface of the pond, took two steps closer…then one giant step like she was going to walk on water.   It was almost identical to what I had seen in my minds eye, only now it was as if I was watching in slow motion.

Luckily the pond isn’t very big nor is it very deep.  But you read or hear horror stories of children drowning in just inches of water.   I don’t even remember racing to the edge of the pond and yanking her out of the water, I only remember kneeling with her standing in front of me, soaking wet, her big blue eyes searching my face for a reaction.

Rather than succumb to the panic mode my brain was desperately trying to transmit, and since her instincts had been to immediately stand up when she fell in (which pretty much kept her head above water, save for the initial baptism dunk), I decided to squelch the panic and with a smile asked her if that was her way of telling me she needed a bath.  So instead of her freaking out to mirror how I was freaking out on the inside, she started to giggle and gleefully say, “Again, again!!”

Needless to say, she never took another dip in the pond again after that, and I did learn to exercise that instinct muscle so I wouldn’t second guess my intuition or gut feeling in the future. 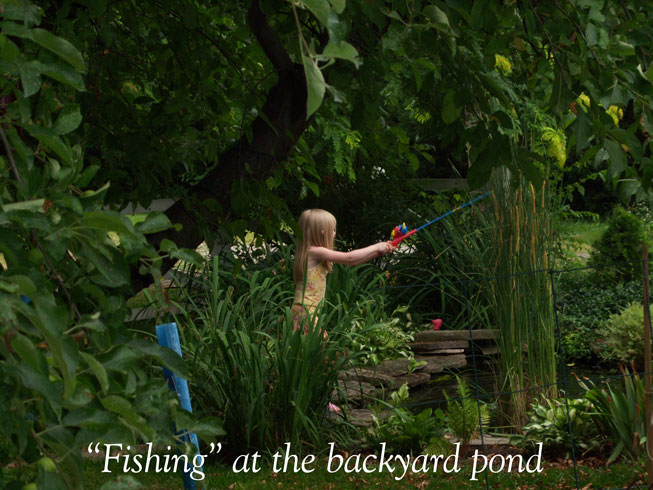 This Intuitive Spin Cycle was brought to you in part by Jen, who I sense is always kept on her toes as Sprite’s Keeper.  Head on over and check out the other spinners – I see some excellent reading in your future!

27 thoughts on “Spinning up Some Intuition or Sixth Sense… But No Dead People.”