One of Princess Nagger’s homework assignments yesterday was actually a fun one – she had a packet of Sweethearts the teacher wanted her to create sentences from the sayings on the hearts, gluing the selected hearts in the actual sentence.  Did you follow that?   I’m a little incoherent today with the cold PN so generously shared with me. 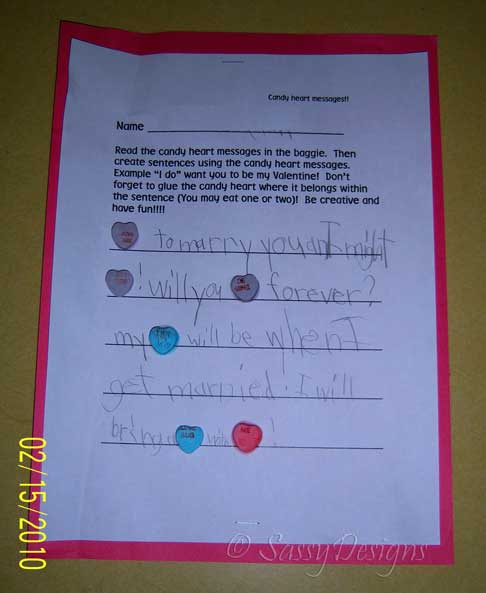 Here are the sentences she came up with (the words in red are the ones actually on the heart…but you probably figured that out already):

Will you “BE MINE” forever?

My “FIRST KISS” will be when I get married.

One thing I noticed about these hearts is that they definitely aren’t like they used to be – the printed text isn’t clear and stamped like they were when I was a kid – in fact, on a majority of the hearts in the packet the words were only half-stamped, most of them were either faded or only partially on the heart itself.  Like they were the budget version of the original.  Princess Nagger decided to re-write one of the hearts so it was more clear:

She penciled it in better than the stamping machine.

She was a little bummed she wasn’t going to be able to eat all of the hearts, since the instructions said to glue them to the paper –  there were plenty left over for her to snack on, since the words on a lot of them couldn’t be deciphered.  Fastened with glue sure didn’t deter the dogs from circling the coffee table like vultures after she was done.  Their long noses sniffed the air delicately, waiting for the prime opportunity to snatch the paper and run.

I shooed them away and put the paper out of their reach on the kitchen counter to allow the glue to dry overnight before putting it into her backpack to take to school, chuckling at the thought that there just might be a time when the Princess Nagger may have to beg her teacher for mercy when the dogs actually do eat her homework.  Especially if she’s snacking on Cheeto’s while she’s working on her homework.

The dogs are, after all, perfect paper shredders.  This time they were disappointed that not only were they unable to hone their skills on paper shredding, they missed out on the sugary bonuses they were so intently interested in.