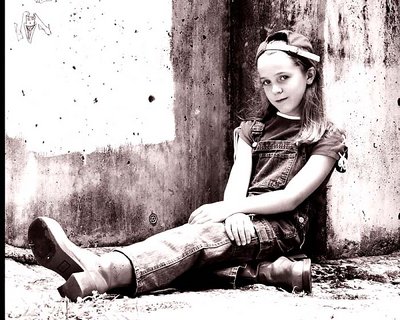 (photo compliments of Google – not actually me)

Bet you wouldn’t believe me if I told you I was a tomboy growing up.  I was, though.  Rough and tumble digging in the dirt, scaring my two sisters with wiggly squirmy worms and bugs.   It was almost as if I felt the need to ‘balance’ things out a bit – with 3 girls and 1 boy, my poor brother was outnumbered.  So he and I teamed up.

The two of us would try to pull pranks and get my two sisters in trouble, but my parents were always one step ahead of us and our plans would backfire.  But when we weren’t trying to get them in trouble, we’d be getting ourselves in trouble.  Like having  pine cone fights in the back yard.

That may seem all innocent and no big deal, except that we’d have them from the heights of the pine trees in the backyard – we’d be throwing pine cones at each other to see who would fall out of their tree first.

We had water fights from those same trees, too.  I wasn’t having any luck hitting my brother target, so the next time we planned a water fight from the top of the trees, I snuck out early and ran the garden hose up into my favorite tree.  I’m pretty sure I won that one.  We were lucky we didn’t break any bones.

The private elementary school we went to was housed in old army barracks, so naturally during recess all the kids would play ‘war’.  I was always irked when I’d be delegated to play the part of a nurse rather than the part of a soldier.  I didn’t want to tend to the wounded, I wanted to be in the thick of things, the pretend shoot-em-up and take no prisoners fun.

It wasn’t because I had something against nurses, since I had plans of being a nurse when I grew up.  It was just that no one ever got pretend-wounded.  The ones playing nurse would pretty much sit around and do nothing all recess, while the ‘soldier’s would be running around like maniacs having a great time.

But I was a girl.   The boys didn’t let me be a soldier, so I was a rebel instead – I formed my own army of one a few other girls who also wanted to be in the midst of the action and we ended up showing the boys a thing or two about creative play.

My brother and I played together constantly – my two sisters were into dresses and dolls and playing dress up, I was into making my Skiing Ken fall down a mountainside and break his leg.  We’d tie our wagons to the back of our bikes and pretend to go camping – swearing like sailors mimicking my dad on the times our family would go camping and he’d have my mom try to back the trailer into the camping spot while he directed.   Fun times.

As I got older, however, I started to become more interested in ‘girly’ things.  I started to care about not getting dirty or digging in the mud.  My poor brother was mad at me for a while when I wanted to do girl stuff and wouldn’t help him dig a hole in the backyard.  He got over it.

As I watch Princess Nagger in her imaginative play, I have to grin because she’s definitely in that tomboy mode I was in at that age.  It’s probably a good thing she doesn’t have a brother to team up with, I can only imagine what stress we gave my poor mom over our antics.

I confess that this Spin Cycle was brought to you in part by Jen, the adorable Sprite’s Keeper.  Head on over and check out the other spinners – see what kinds of confessions are being bandied about – there are definitely some way more interesting than mine ones!

27 thoughts on “Spinning up some Childhood Confessions”