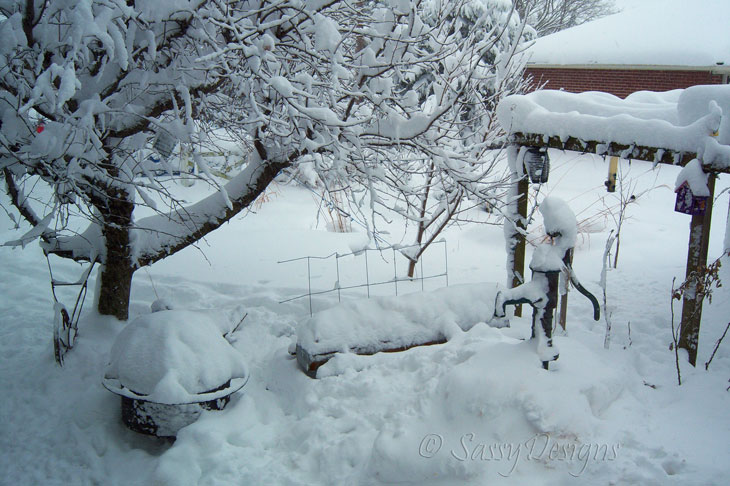 Step Two: Take a full five minutes plus to put each item on.

Step Three: Finally, an hour later, decide that it’s time to go outside and play in the deep, deep snow.

Step Four: Spend a full ten minutes throwing snowballs at Mama and the dogs and see how many snowflakes can be caught on your tongue.

Step Five: Go back in the house, track snow all over the floors randomly wandering from room to room before deciding to shed the snow clothes and put on warm dry ones.

Step Six: Lay cold snowy clothes on top of pellet stove so they’ll dry out and warm up for more adventures in the snow.

Step Seven: Five minutes later put on different coat, garden shoes, forgo the hat and gloves and return to the outside snowy world.

Step Eight: Decide that the snow is way too cold for naked hands and enter the Summer House with rosy cheeks only to realize you now got busted for no hat, gloves or boots.

Step Nine: Go back into the house, tracking more snow throughout before remembering to kick off your garden shoes by the still wide-open back door.

Step Ten: Call Mama on the intercom and whine that you’re hungry and would like some waffles, now please.

Step Eleven: Make multiple trips out into the snowy tundra, eat your weight in snow, and create pathways for a dinosaur adventure.  The ‘pathways’ make the dogs extremely happy since the snow is as deep as they are tall.

Step Twelve: Convince Mama to come out and see your handiwork even though it’s now dark, and giggle while you crawl through the pathways you’ve created with the dogs hot on your trail and the camera flash helping light the way.

Saturday was cold and snowy – for pretty much the entire day.   The picture at the top was taken at 10 am Saturday morning while it was still snowing.  It continued to snow until about an hour before sunset.

Sunday, however, brought bright sunshine, though the temperatures didn’t rise much above 24 degrees.  The perfect day for dealing with this: 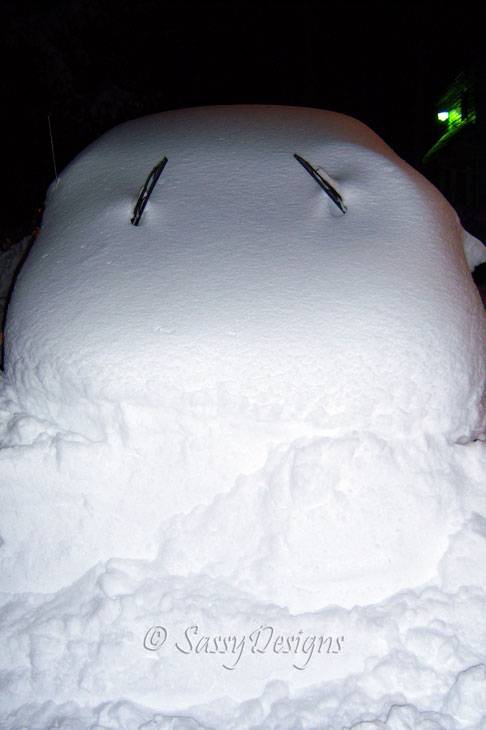 In case you’re wondering – that is my Grand Caravan literally buried in snow (when it started snowing, hubby raised the windshield wipers on both the van and his little car to make it easier to clean the snow off the windshield and not ruin the wipers.  It made both vehicles look like funky snow aliens).  I took that picture Saturday evening, just after the sun set (while following Princess Nagger who couldn’t wait until daylight to show me all the trenches/pathways she made in the deep snow).  I also discovered that I cannot maneuver through 30 inches of snow as gracefully as a 7-year old can.  More pictures and fun tomorrow!

Princess Nagger’s school has a 2-hour delay this morning, which made her happy to be able to sleep in.  We also have a Winter Storm Watch that was issued last night – for Tuesday night through Wednesday evening with the ‘early’ prediction of another 10-inches of snow.  Be careful what you wish for…

We had intermittent internet connection over the weekend along with a couple of power outages, so we spent a lot of time playing in the snow…and lots of shoveling.  How was your weekend?