This was Saturday – our first official snow storm of the 2009-2010 winter – those that are they are predicting we will have a repeat of the winter of 2002-2003 where we broke all previous records of measurable snow.  This storm sure started off that prediction with a bang: 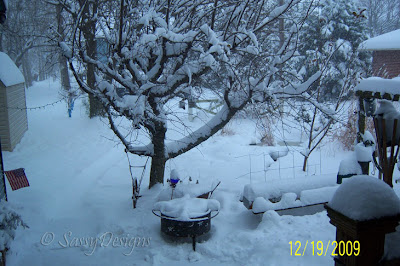 That was about a quarter of the way in the snow storm.  See that little divet in the snow past the apple tree?  That was not too long after I had shoveled a clear path while it was snowing – since we were expecting 10-16 inches, I figured it would be easier to shovel several times during the snow storm instead of all at once at the end.  We ended up getting 24 inches.  And then some. 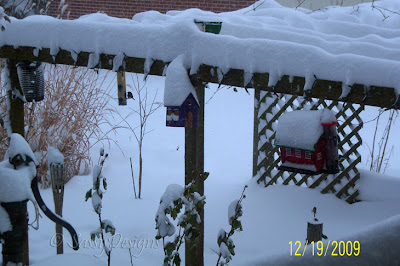 I had forgotten to fill the bird feeders the day before – you know, when it was nice and sunny and not snow covered.  The picture above was taken after I filled them up during the snow – sure didn’t take long for the snow to cover the top of the barn one, that’s for sure.  I had knocked all the snow off to make it easier to fill.  I also noticed that I neglected to cut back my three rose bushes…oops! 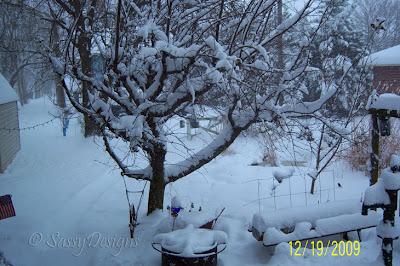 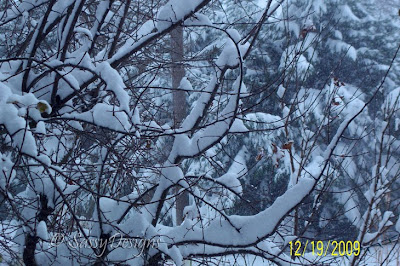 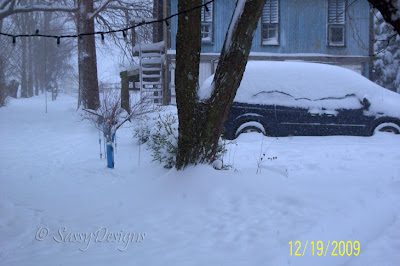 My mom-van is getting buried.  Hubby parked his little car at the front of the driveway so in case of an emergency, it would be easily dug out and a quick getaway to the road out front.  Usually he parks his car out in the area where my van is. 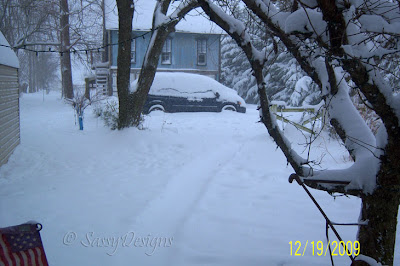 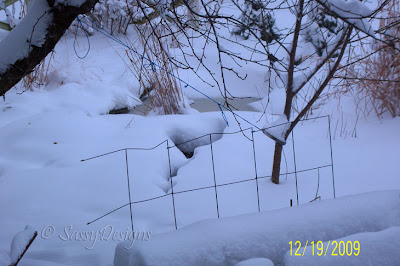 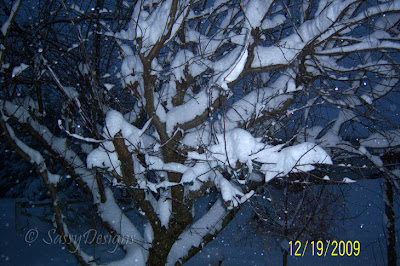 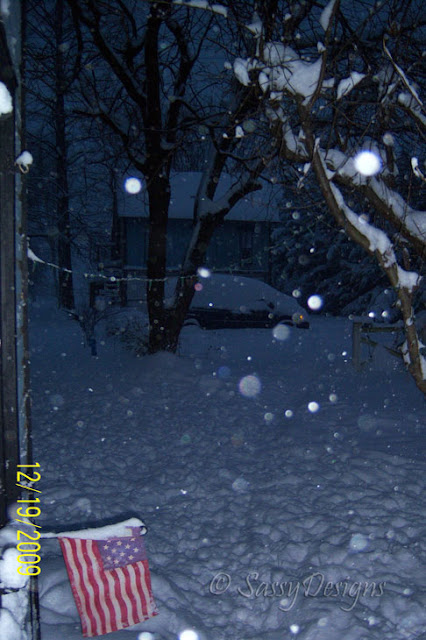 It snowed from just before noon until about midnight.  At times it was snowing at a rate of 1-2 inches per hour.  Both Rolex and Travis had a ton of fun running around in it, though – Travis barked at the falling snow at first, then he was on board with playing with Rolex and Princess Nagger. 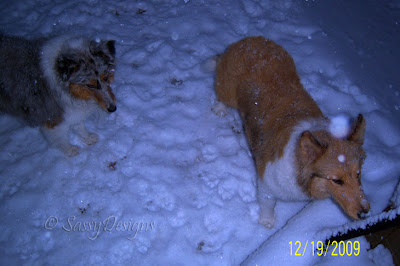 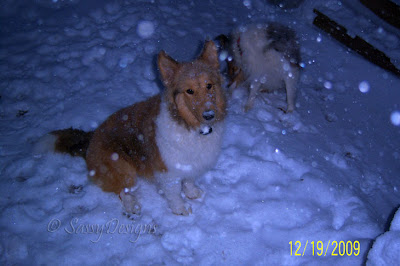 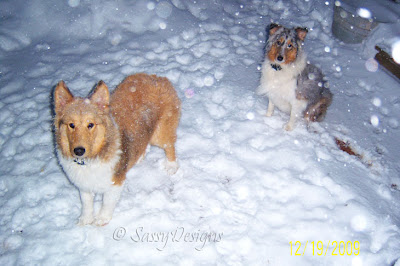 The next day it was bright and sunny, though still very, very cold.  The real work began as we had to clear the sidewalk that runs around the side of the house, but the major work was shoveling out the driveway.  It was a major pain for sure.  Since we have a gravel driveway, we can’t go the easy route and use a snow blower, we had to shovel the entire thing by hand.
Here I’m standing not quite at the back of the driveway, near where my mom-van is parked looking towards the front: 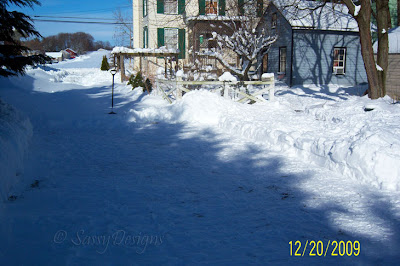 Here, maybe this will help: 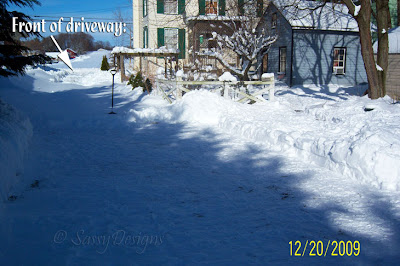 That cleared spot is where hubby’s car was parked.   He dug his car out and started working back towards me.  When I was taking these pictures, he was making a run to Lowe’s to see about getting a second snow shovel, since I was using our only one, and the metal shovel he’d been using broke.  He had no luck and ended up working on clearing with a rake.
I cleared the flagstone walkway from the Summer House to the parking area of our driveway.  But rather than clear out that whole big section, I simply dug a path to my van, then cleared the area around and in front of it, then started working my way towards the front of the driveway, one shovelful at a time. 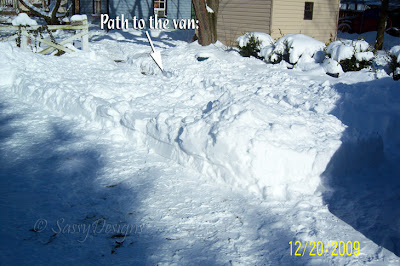 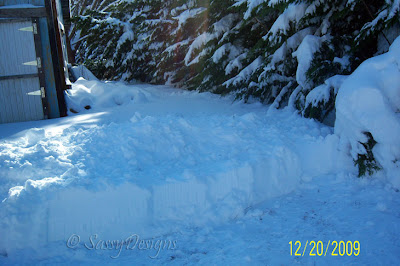 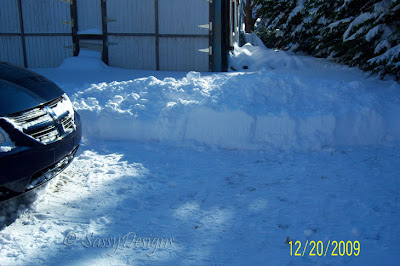 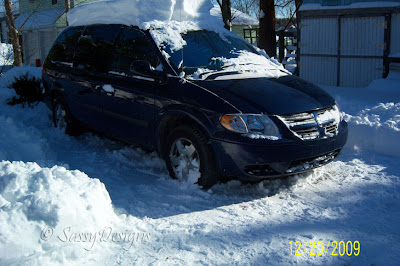 Notice there’s a problem with the line of evergreens along the one side – one fell over completely, another was leaning drastically. 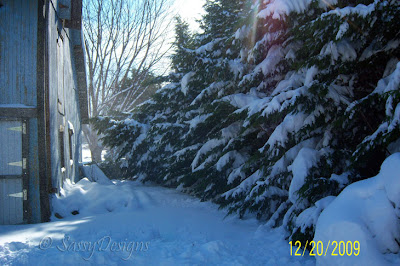 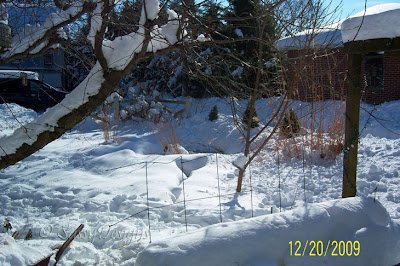 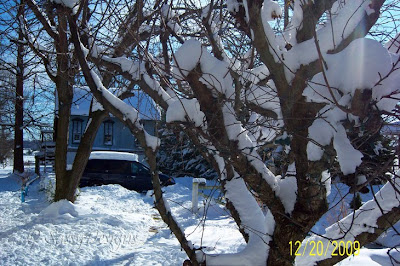 Travis and Rolex had lots of fun running around in the snow – as evidenced by the multitudes of little footprints in the snow.  It’s been only a few degrees above freezing during the day, which is making the snow stick around all week – possibly until Christmas Day giving us a technical ‘White Christmas’.
Mother Nature has some not-so-fun stuff planned at this point for Christmas Day, though – a chance of rain or freezing rain on Christmas Day.  Which will then make things extra soggy and not so wondrous as snow.  It could change, though, each day the prediction comes down a couple of degrees – if it keeps up that trend, maybe we’ll end up with snow for Christmas Day instead of a slushy mess.  I’ll keep you posted.

I apologize that I haven’t been getting around much this week – I probably should have taken a bloggy break since it’s been so crazy busy, but thanks for understanding and continuing to read and comment here!  I promise I’ll make it up to you when the craziness dies down a bit!

Mother Nature really has been pulling a fast one this month, hasn’t she?  We got what’s being called a ‘one-two punch’ with two big snow storms hitting us within days of each other.  Today I’m going to keep things fairly … Continue reading →

Wordless/Wordful Wednesday – So Much Snow, but Fun Like a Penguin

At the beginning of the winter season, the meteorologists were speculating that the winter of 2009-2010 could be a repeat performance of the winter we had in 2002-2003.  That winter we got double our ‘average’ amounts.  The major storms started … Continue reading →