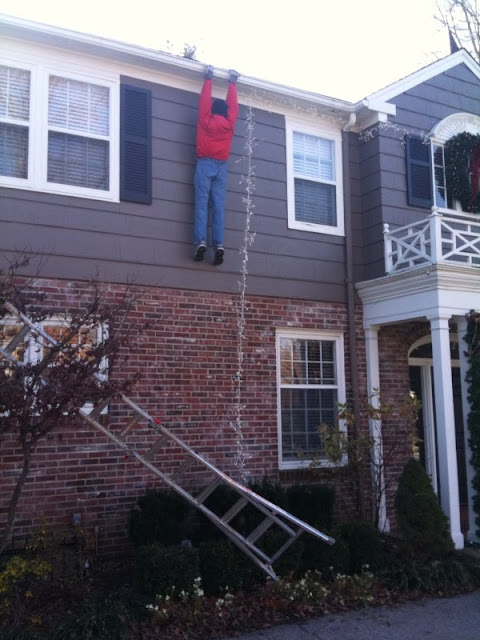 This is the funniest Christmas decoration I’ve ever seen.  Looks real, doesn’t it?  Here’s the story from the person who had this up explaining:

“Good news is that I truly out did myself this year with my Christmas  decorations. The bad news is that I had to take him down after 2 days. I had more people come screaming up to my house than ever.Great stories. But two things made me take it down.
First, the cops advised me that it would cause traffic accidents as they almost wrecked when they drove by.
Second, a 55 year old lady grabbed the 75 pound ladder almost killed herself putting it against my house and didn’t realize it was fake until she climbed to the top (she was not happy). By the way, she was one of many people who attempted to do that. My yard couldn’t take it either. I have more than a few tire tracks where people literally drove up my yard.”

Very creative!  It would be freaky to see something like that.
In other news, a Redneck Santa Sleigh: 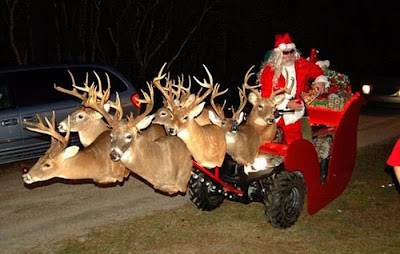 So wrong in so many levels!  But funny!

here’s a video that has some pretty incredible Christmas lights:

This Christmas display uses 176 channels and 45,000 lights.  The show is so popular that it requires a crew of 3 people to manage the traffic.

I don’t know if I would want to be their neighbor, though.

Favorite Christmas Tree Decorations – How Do You Decorate?

Last week RxBambi posted about her favorite Christmas Tree ornaments.  I thought it was a great idea, so I’m following suit.  For years my tree has always been eclectic – ornaments my mom gave me when I moved into my … Continue reading →

The Curse of the Pre-Lit Christmas Tree

It was a dark and stormy night…well, not really, but I always wanted to start a post off with that.  Yesterday was beautiful and sunny – most likely the last day we’ll see 60-degree weather for a while, since those … Continue reading →