Saturday night we went out for my Birthday Dinner.  Since hubby had some gift cards for Red Lobster and usually the experience is fun even for Princess Nagger, that’s where we decided to go.  Besides, I had a craving for lobster tail, and normally the lobster there is excellent.

I also love salmon, since I hail from the Pacific Northwest and you get the best salmon there.  Granted, here in Southcentral PA it’s a little harder to obtain a decent salmon, but you take what you can get.

Red Lobter’s menu has changed – and not necessarily for the better.

The first thing we noticed was the removal of apple sauce as a side dish.  Why in the world would you remove something people both young and old enjoy?  Princess Nagger opted to not have any sides with her meal, especially since her only choices were baked potato, mashed potatoes, rice or broccoli.

No spuds or rice for the Nag, and of course no mini trees.  Apple sauce would have been a welcome side dish, but ‘The Man’ at Corporate did away with them.  Why?  We may never know.

One of their new menu items is a Maple Glazed Salmon.  Sounded delicious to me – so I ordered that with a Maine Lobster Tail, knowing full well that I would be taking home a doggy bag.

Our appetizers and drinks came in record time, quickly followed by our salads.  Then we waited.

And waited some more.

Our server stopped by when she noticed we were getting a bit restless and assured us that our meal would be arriving shortly.

What she didn’t say was that it was on a slow boat from China.

Finally our plates arrived – hubby had ordered two entrees because he’s one of those lucky ones that can eat his weight and his weight will not change.  Yes, I’m jealous of that annoying trait.

My lobster tail looked rather small and a little ratty, and instead of the normal ‘fluffed from the shell’, the shell was brutally split in half and the lobster meat was still securely attached to the inside of the shell.  I picked it up with my fingers and showed hubby across the table:  “Does this look ‘fluffed from the shell’ to you?”  He grinned and shook his head, and I noticed some disapproving looks from other patrons for my obvious disregard for table manners.

I eyed my plate and noticed that the scoop of rice pilaf was carelessly tossed onto the plate and very sparse, and the piece of salmon seemed incredibly small.  Not only has Red Lobster taken away some excellent appetizers, side dishes, entrees and desserts, but it appears they’ve minimized their serving sizes as well.

I wrestled the lobster meat from the confines of the shell and was a bit disappointed by the tepid temperature, but we had waited so long for our entrees I wasn’t going to let it stop me from enjoying it.  Besides, the equally tepid melted butter complimented each bite.

Then it was time to try the new menu item – the Maple Glazed Salmon.  The Maple Glaze had to be brought, because it was ‘forgotten’ initially.  Why would you call it Maple Glazed Salmon when it really isn’t glazed?  It’s an overly sweet sauce that comes in a separate little cup to be added by the diner.  Made no sense to me.  I suppose that way each individual can dictate how much of the sweet glaze you actually want on your Salmon, but whatev.

I took the first bite in anticipation and choked, frantically grabbing for my ice water and taking a few large gulps.  The consistency of the salmon was like extra dry jerky.  If I had taken a bigger bite, I might have been dancing in the aisles begging for someone to perform the Heimlich Maneuver on me.  It was that dry.

My Bahama Mama was more than half gone and my water was empty before our server finally stopped back by.  Hubby and I used this free time to share our observations of the  lack of garnish on the plates, the poor presentation of the food in general, and the overall portions looking meager.

We were channeling our inner Gordon Ramsay. 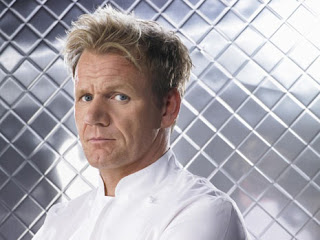 Good thing I wasn’t going to be critiquing this meal for any reason.  Well, except blog about it, of course.

When the server finally came back to check on us, I let her know that the salmon was extremely dry.  Which really was an understatement.  She kindly offered to replace it, and whisked the offending salmon jerky away.

A short time later you’d think word had gotten out that Gordon Ramsay was sitting at our table.  Maybe our conversation about “Chef Ramsay would never stand for this” put them on high alert.

Not only did the Assistant Manager stop by and apologize profusely for the salmon, but the Manager stopped by and apologized and said he’d personally be bringing my replacement salmon shortly.  Hubby mentioned that his skewered shrimp was also extremely dry, but he didn’t want it replaced because he had plenty of food to keep him happy.

About ten minutes later, the manager stopped by with a fresh salmon for me.  It looked much more moist and tender than the first one did, so I took a small bite to taste it.

My taste buds were overwhelmed by the excessive amount of salt the salmon had been inundated with.

I took another small bite just to make sure I hadn’t gotten a bite with an extremely large chunk of sea salt stuck to it, and the second bite was equally as salty.  Way too salty to eat.  The third small bite a little further in from the edge confirmed that it truly was inedible.

The Assistant Manager stopped by with the server to check to see how it was, and I felt bad telling them it sucked, but suck it did.  It was downright awful.  The poor salmon had been drowned in salt.  They were very apologetic and whisked away the offending salmon to see if the third time would be the charm.

The Manager stopped by again apologizing profusely for the problems we were having with the dinner, and said he’d be comping both our dinners for the inconvenience.  We told him that wasn’t necessary, they were doing their best to make it right, but he insisted.

Finally my replacement salmon was brought out jerky-free and salt-free.

Chef Ramsay would have had a fit.  I smiled and said thank you very much and nibbled on the cooked outer edges then asked for a box to take it home with me.  I figured maybe it would finish cooking if I reheat it in the microwave the next day*.  I just didn’t have the heart to tell them it still sucked pond water.

I did ask the server if there was someone new in the kitchen – apparently there’s a guy who only works on weekends, and once-in-a-blue-moon he’s Grill Master.  He’s not very experienced (or very good) at Grill Master.

Meanwhile, Princess Nagger wanted dessert, so she ordered strawberry cheesecake which she’d never had before.  She loved it.  The dessert menu is sadly lacking since they got rid of some of their top selling desserts (like my favorite Banana Foster Cheesecake), so hubby and I opted to not have dessert.

The manager was true to his word and did indeed remove my meal from the tab, as well as one of hubby’s entrees.  We made sure we tipped the server based on what the original total would have been, because it certainly wasn’t her fault the food wasn’t cooked the way it should have been.

Word to the wise – check to see if they have a Grill Master on site if you decide to try the new Maple Glazed Salmon.  Because if they don’t have a Master, you don’t want to order it.  And if you have a Nagger of your own that looks forward to the apple sauce as a side dish, bring your own.

*I did reheat the salmon in the microwave yesterday, and it turned into dry jerky like the first salmon – which means they must have zapped it in the microwave to heat it after it was forgotten about (the long wait) or because it was undercooked the first time.

Don’t forget – you still have time to enter my giveaways: