One day last week Princess Nagger asked if she could borrow a piece of paper and a pen.  When I handed them over, I asked what she was planning to do.  Her response was:  “I have a surprise for Dada.”  A little while later I spotted this on hubby’s chair by his computer in the Summer House: 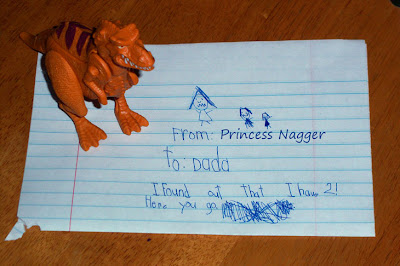 It was one of the dinosaur Happy Meal toys she discovered she had two of – it’s the dinosaur that you can flip his head to have him showing all his teeth or not.  Hubby had mentioned it was his favorite, so when she found that she had two of them, she decided to give him one with the note above*.

I love it when she decides she wants to share something unprompted… makes a Mama proud!

*Her name has of course been PhotoShopped out and replaced with her blog moniker.