The plague has arrived in our household.  Luckily not the pork variety, but major cold/sinus infections complete with all the yucks.  Princess Nagger even stayed home from school yesterday.  Hovering Hubby was complaining of the same cold-like symptoms, so I imagine it will only be a matter of time before he decides he needs to stay home from work to ‘rest’.  And of course when he’s sick he gets to rest.  Not me.  I’ll trudge on even though I feel like crap.  Mommy duties never get to rest.

Speaking of not resting…the puppies are not letting the pumpkins rest.  They’ve now dug all the way to the seeds of this poor, pitiful pumpkin: 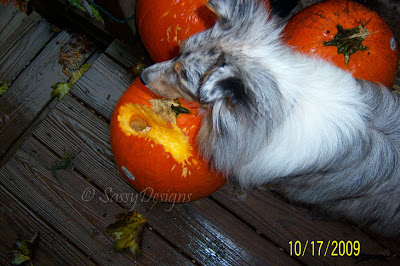 Maybe they’re trying to tell me to bake them a pumpkin pie.

Speaking of baking, I haven’t done any of that for the ‘season’ yet.  If you saw my post from yesterday, I have started the seasonal wine jelly making portion though.  The baking portion happens later.

Speaking of Wine Jelly, I got fancy jelly jars.  Of course I had to design some fancy labels for those jelly jars.  Only problem is that the surface space on the jelly jars didn’t fit the size labels I have currently.  They’re either too small or too big.  I went to Avery’s website to see if they have a label that would fit the jelly jars, and I found the perfect size.  They’re supposedly carried at both Office Max and Staples.  It’s a coin toss which office supply place to go because they’re both about the same distance from where I live, only in opposite directions.

The choice was narrowed down by the price – they were $7.00 more expensive at Office Max than at Staples.  So I called Staples to see if they actually have them in stock, because the other choice was to either place an order online and pay an extra $10.00 shipping to my door, or get free shipping by having them shipped to the store.

The guy I spoke with at Staples put me on terminal ignore hold for a good 20 minutes while he went to go check the stock status.  I was thrilled to find out they actually had them in the store.  I even verified the information – size, label number, etc., and was told they absolutely have them in stock.  So I drove the half hour drive to get there on a cold, rainy Saturday at dusk.

I wandered up each and every aisle in the store, just in case they were in a different place.  Nothing. 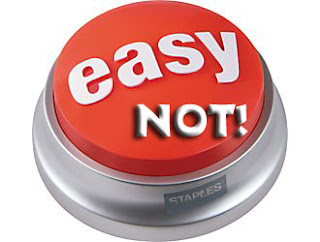 I had been very specific about the size needing to be no less than 1-1/2 inches tall.  Not 1-inch, not 1/2-inch, not 2-inches, but 1-1/2 inches.  He had assured me that the exact labels I was looking for were on their shelves.

So I tracked down an employee.  A fresh-faced kid named Dan tried to help.  He did the same grid search method I did on the label shelf to no avail.  Of course I hadn’t written down the information before I left, since I had relayed that to the mysterious voice of Staples on the phone.  I didn’t think I needed to bring it with me.

During the grid search by Dan another customer sauntered into the aisle looking a bit anxious holding a flyer in her hand.  She looked at me then looked at Dan and asked him if she could ask him a quick question.  I told him to go ahead and help her with her quick question and I’d go over to the copy center to see if they knew of these mysterious labels they supposedly had in stock.  You’ll see why this anxious customer is relevant later.

The nervous copy center guy didn’t make eye contact at first, he seemed befuddled with the stapler he was attempting to use unsuccessfully.  He muttered something about needing a new stapler.  I commented in a joking manner “You’d think you’d be able to find a decent stapler at a place called ‘Staples’, wouldn’t you?”

Dan showed up right at that moment and he caught the joke and laughed, so it didn’t totally fall flat.

He helped me explain to the nervous copy center guy what I was looking for, so the NCCG tried to see what he could find on his computer.  I noticed the computer was on a swivel top, and since he was on the Staples.com website – where I found the labels in the first place – I was tempted to swivel the computer in my direction to make the search process go faster.  But I refrained.

Finally he followed my directions on the search terms I used and successfully located the mysterious labels.  He wrote down the info on a sticky yellow pad and mentioned that if I find Dan again, I could have him look it up on a kiosk computer in the back corner of the store to see if the mystery of where they were located could actually be discovered.  Dan showed up right at that moment and rather than hightail it back to the kiosk, went back into the same label aisle that the grid search had happened several times already.  Like having the label number and stock number would change the status of the labels not being on the shelf.

I had now been in the Staples store for over an hour.

He finally decided to go to the kiosk and look them up.  I decided to call home and get Office Max’s number from hubby while I waited.  When Dan got back with a shake of his head that they were not in stock in the store at all, I quickly called Office Max and found out in less than five minutes that they didn’t have them on the shelf, that it was an ‘online purchase only’.  At least Office Max was forthcoming about it, because Staples sure wasn’t.

I told Dan it was now time to talk with the manager.

The manager, Will, seemed none too pleased to be pulled out of his corner office with the one-way mirrors on the outside.  He reluctantly listened to my tale of woe and walked over to one of the computer registers in a huff, tapping madly on the keys, only to end up getting himself locked out of that particular register.  So he moved on to the next one.  He was able to confirm in a short amount of time that they did not, in fact, carry that particular label in the store, only online.

You would think that it would have been figured out by the person I called before I even made the waste-of-time trip out there.  You’d think.  I asked the manager what the options were, that I was unwilling to spend $50 just to get free shipping to my house, that if I had been told over the phone they were only available online that I would have ordered them online to ship to the store, thus only making one trip out there instead of what was looking like two.

Granted, I could have found something else to purchase to make up the $15 difference between the cost of the labels and the free shipping minimum, but now it was all about principle.

I asked him if there was any way he’d be able to waive the delivery fee because of this fiasco.

I fully expected him to say no, especially with his obvious displeasure of having to ‘deal’ with a customer face-to-face.

Reluctantly he said yes.  Actually, what he said was “We’re really not supposed to do that, but I’ll make an exception this time.”

Right about that time the earlier anxious customer appeared out of nowhere and started bitching up a storm about how she was left hanging and that she never gets good service from that particular store any time she’s ever been there.  Poor fresh-faced Dan looked like a deer caught in the headlights as she was directing her venom at him, at me, at the manager (who I don’t think she realized was actually a management figure) and at the poor cashier, Katie.  Once she bitched and moaned about never getting good service, she lumbered out of the store with steam coming out of her ears.

When it was all said and done, my quick little errand trip that should have taken no more than an hour – maybe an hour and fifteen minutes – took three hours.  Three cold rainy hours.

Speaking of cold rain, Mother Nature has been a bit on the freakish side again…or is that still?  After the 5 days of cold rain and temps only reaching 40 during the day and dipping into the 30’s at night, today it’s supposed to be sunny and 65.  Tomorrow 70.  No wonder the plague has descended on our household.  Going hot-to-cold-to-hot-and probably cold does quite the number on your resistance.

Speaking of resistance, I couldn’t resist getting the Princess Nagger some cool new dinosaur stuff. One of which included a hatching dinosaur egg.  But since this randomness is becoming way too long-winded and not-so-random, you’ll have to check back tomorrow to see all the pictures of the coolness of the dinosaurs.