Princess Nagger and I had a girls weekend since hubby was off to Michigan for a band gig.  We had an exciting Friday night with cereal for dinner and finally got around to watching Ratatouille.  That mouse sure knows how to cook!  Saturday we went to see the movie she’s been wanting to see – ‘‘Cloudy With a Chance of Meatballs’.
I had heard mixed reviews about the movie, but was pleasantly surprised.  Not to mention it kept Princess Nagger’s rapt attention from the first minute through to the very last credit.  Yes, she didn’t want to budge from her seat until all the credits had rolled.  Every. Last. One.
Ever since Saturday she’s been reenacting parts of the movie – her favorite is jumping on the bed pretending it’s jello.  She enjoyed it so much, she’ll relay all the funny parts – in great detail and with flourish – to anyone who will listen.  Anyone want to hear all the funny parts?  Maybe she’ll be a movie critic when she grows up.  Oh wait, she’s still talking about being a paleontologist.
I am constantly amazed at how many dinosaur types PN knows – she’ll rattle off the name of any dinosaur and give me a little synopsis of what dino-age they were from (yeah, I know that’s not it, but it went in one ear and out the other) if they were omnivores or herbivores or carnivores…I’m learning more about dinosaurs than I ever cared to learn!  But I love it.
On the way home from the movies on Saturday, we decided to stop and pick up our usual supply of corn stalks, pumpkins, hay bales and Indian corn to get the porches decorated for fall from the same farmer we’ve been getting that stuff from the last 3 years.  Apparently the economy and ‘bad crop’ year that hit our apples and grapes, hit others as well.  At least I didn’t have to worry about my thumb losing some of its greenness.
The largest pumpkins they had for sale this year were the same size as the medium ones from last year…and this year they wanted $5.75 per pumpkin vs. $3.50 from last year.  I was sure I saw bigger pumpkins at BJ’s for less.  While it would have been nice to help support the local farmers, my decorating budget wasn’t flexible enough.
I did still buy 6 pumpkins from her, though – 3 small ones and 3 medium sized ones, plus 2 bunches of Indian corn, 2-1/2 bales of hay and 5 bundles of corn stalks.  The corn stalks were huge!!  So huge, in fact, that they didn’t fit in the back of the van with the 3rd row seats folded down and wedged between PN’s seat and the door…not even with putting the front passenger seat all the way forward.
All the other corn stalk bundles I’ve purchased in the past fit perfectly without having to move the front passenger seat forward – and the door would close.  Not this time.  Oh, I’m not complaining, far from it – in fact, her bundled corn stalks were the best I’ve ever seen – she had a dozen stalks bundled into one bundle for $2.00.  Anywhere else had less stalks bundled for a higher price, or the ones for $2.00 were scraggly, maybe 4-6 stalks per bundle and short.  So I didn’t mind that I had to ask for twine to tie the back door of the van down to make driving home a little less hairy: 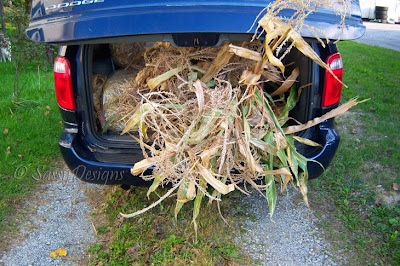 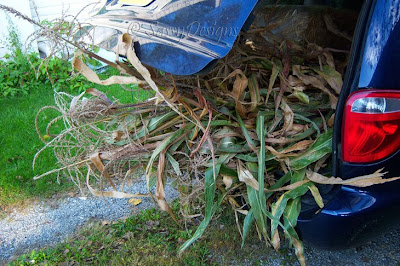 Yes, I ended up being one of those people driving a little slower than the speed limit on the way home.  But not on the open country road, I was able to fly faster go the speed limit to get home quicker.  I just had to be careful of any bumps.  I took the pictures after we got home, so obviously nothing went flying out the back.  Then the real work began as I hefted the hay bales and corn onto the front porch to begin the decorating…on Sunday.
Which means you’ll get to enjoy the end result tomorrow.  Since I still need to take pictures of all the hard work.
PN and I were going through her Alphabet Song book this weekend…she’d sing the song and see if I could identify the original song from the tune.  I did pretty good, but man, some of the songs had me stumped.  Like “Five Fat Turkeys”…never heard of it!  Found a cute video on YouTube of a kid singing it, but PN said that’s not the same tune she learned her Fifi Fish song…whatev.
I had some more randomness in my head, but that should be enough for today.  Even though it’s not quite as random.  But it was from my head.  So that’s good.  What’s in your head?  Feel free to head over to the Un-Mom’s to unload your head.

In the smallest of gestures, I’m supporting #BlackOutTuesday in hopes that we all take the time to pray that strength, wisdom and goodness prevails. Love to you all. Please spend the day not posting pictures & videos of violence or … Continue reading →