This has been an incredibly busy week.  I’m so glad it’s Friday.  Especially since Mrs. 4444‘s from Half Past Kissin’ Time and the multi-talented Sara from Ordinary and Awesome make Friday’s extra fun by encouraging us to kick back, relax and throw any and all fragments out to see where they land.  Where will your fragments land this week?
******************************

This week has been a flurry of activity with wine making and candy making.  Aside from a few taste tests of the candy dough, I’ve been really good about not imbibing in all the creations I’ve made this week.  Of course that doesn’t mean I won’t imbibe this weekend.  I think I’ve earned it.

******************************
Tuesday morning I waited patiently for Hovering Hubby to head off to work after Princess Nagger got on the bus.  He finally departed around 9:00 am, so I could get started with all the things I had planned to do.  I was in the basement collecting the boxes of my jelly making stuff when the dogs started barking, and I swore I heard hubby’s voice.  Sure enough he was already home.  At 10:55 am.

When he left barely two hours earlier, he said he was going to try to get home early.  ‘Early’ in my mind is 3 or 4.  But before 11 am?  Way too early.  I can never get anything done with constant interruptions and the hovering, so I had to toss aside getting anything done that day.  Which then just made Wednesday even more hectic.  Especially since Hovering Hubby went to work late on Wednesday.  Some days I sure wish he had a ‘normal’ schedule, instead of the mish-mash he has.  I’d get so much more done. 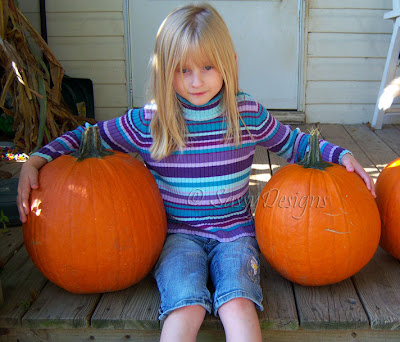 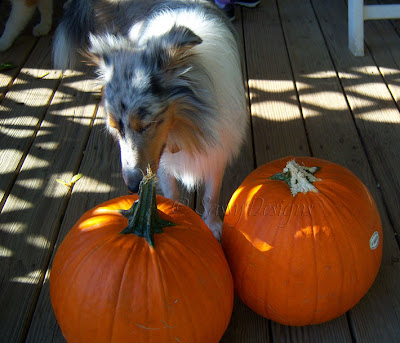 Well, apparently they think I bought those pumpkins just for them.  They’ve been eating them slowly but surely: 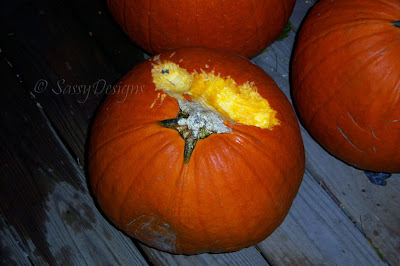 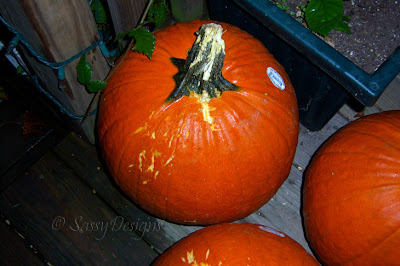 Who knew puppies would like pumpkins?  I guess I should have put these on the front porch and the smaller ones on the back porch.  Live and learn.

Papa came for a visit on Saturday – Princess Nagger wanted to show him her Furby Family and wanted to do a ‘card trick’ for him.  She kept saying, “Pick a card, any card!” but held out the cards with one prominently sticking out and wouldn’t let him pick any card except that one: 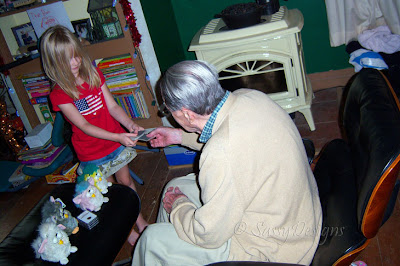 Papa was a good sport and let her think she had mastered the card trick.  They played for quite a while until he was ready for more coffee. 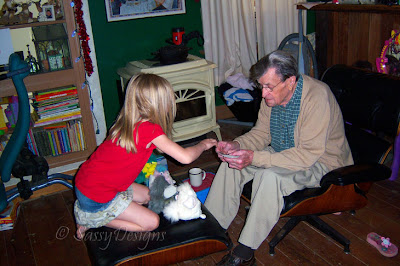 After Papa left, Princess Nagger decided to try on Dada’s cowboy boots.  She clunked around in them for quite awhile: 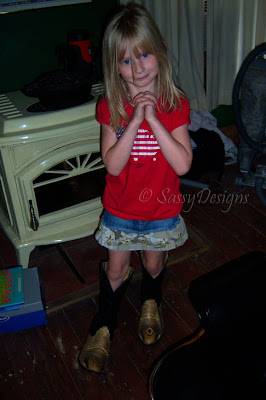 I still haven’t had a chance to decorate the back porch yet – Mother Nature has been uncooperative and sending us damp, cold weather.  Yesterday I did my bi-monthly grocery shopping in the rain.  The ‘high’ for yesterday and today?  40 degrees.  Fun times.  Especially since I couldn’t dress too warmly because the moment the air cools down, the stores tend to crank up the heat.  Doing marathon shopping in sauna conditions doesn’t bode well.  So I wore capris and a t-shirt with a jean jacket.  I got lots of funny looks about my ‘warm weather attire’ on a cold blustery rainy day.  But I didn’t get overheated, so that’s all that mattered.

Princess Nagger is off school today.  She wants to go on a dinosaur hunt, particularly to look for what she calls ‘Dinosaur Goo’.  It’s goopy stuff in a container that has a dinosaur in the middle of it.  We found some at Target, but they were all gone the last time we were there.  So she’s requested a trip to Target to look again, and if they’re not there, Toys R Us.  Wish me luck.

Helping Princess Nagger get dressed for school yesterday, I picked out a pair of pink and brownish-tan camouflage jeans, pink top and soft brown and pink hoodie.

PN:  “Ooooh! Sean’s going to love me today because he loves camouflage.  Maybe he will even marry me!”

Me:  “Marry you?  I thought you married Luke this summer in Louisiana?”

PN:  “Oh, yeah, well, that was Louisiana.  I want to marry Sean in Pennsylvania.”

Me (laughing):  “Uh, I don’t think that’s how that works.  Besides, what does Sean think of your plan?”

Me:  “Don’t rush into anything, you have plenty of years before that can happen.”

PN:  “Do these pants have pockets?”

PN (checking the depth of the pocket with her hand):  “Oh good, I can take a dinosaur to school in my pocket.”

Me:  “Which one are you planning to take with you?”

PN:  “Today I think I will take the Triceratops.”
Me:  “Good idea.  Just make sure you don’t leave it at school because remember you’re off tomorrow and have a long weekend.”

PN:  “I won’t forget it at school.  I better not put it in my pocket horns down, though.”

Don’t forget to visit Mrs. 4444 at Half Past Kissin’ Time for fun Friday Fragments, Sara at Ordinary and Awesome for Friday’s Freewrite, and Ann Again and Again for VGNO.