How in the world did it get to be Tuesday already?!!  Did someone sneak in and move all the clocks and calendars forward a week?  Or am I just perpetually blinking away the days?  At any rate, it’s Random Tuesday Thoughts time, as so deemed by our Super Hero Keely, the one and only Un-Mom. If you don’t know who she is by now, you’ve apparently been living under a rock.  So time to crawl out and check out the coolness that is Keely.  I promise you won’t keel over. Maybe.
There must be something (good) in the air… Yesterday Princess Nagger went to school with nary a protest.  Shhhh!  Don’t say it out loud, you might jinx the sweetness in the air.  Tiptoe quietly, please.  I don’t think it has anything to do with my bribing her, because she didn’t offer up any suggestions for currency exchange.  So hopefully it means she’s finally resigned to her fate of the next 12 years of school decided maybe she likes it.  I’ll keep you posted.


For the first time ever in my life, I received a Jury Summons.  Keep in mind this is Small Town…though the next town over isn’t so small, and isn’t so drive-by-shooting free and is rampant with trouble makers.  Of course that’s where the main county court happens to be and where I’ve been ‘summoned’ to.  But the problem is, I can’t sit in a courtroom twiddling my thumbs for a full week (and possibly two) while they decide who will actually be on the jury out of 120+ people summoned.

You read that right – they summon over 120 people per case to whittle down to the final 12 or however many they need for the trial.  Ridiculous.  There’s no way to coordinate hubby’s schedule to accommodate the Princess Nagger’s school times and bus pick up/drop off for an entire week, not to mention more (since the letter said no less than one week, possibly two).  So I have to write a formal letter requesting to be excused from jury duty and then wait and see if they accept my reasoning or not.

Why couldn’t they summon me for jury duty when I was working full time?  I mean c’mon, at least then the measly $9.00 a day they pay you for said duty would be compensated by a regular paycheck, too, and I would have happily given up my valuable time at work to sit and twiddle my thumbs all day.  $9.00 a day will most likely barely cover gas and parking.  With my luck, gas and parking will cost me more than $9.00 a day, which means for a week I’d be paying for me to twiddle my thumbs in the courtroom.  No cell phones allowed either, so there goes the idea of texting or Tweeting to combat the boredom.

Normally I’d be all over ‘doing my duty’ and all that jazz, it might be fun to hang out in a courtroom and get some awesome blog fodder.  But with having to worry about not having child care for the Princess Nagger (my family is 3000 miles away, hubby’s family is his ailing 87 year old father who lives 1-1/2 hours from here) and we have no ‘babysitter’ for the Nag.  Not even a paid one.  Here’s hoping I come up with an ultra polite and respectful letter that achieves positive results.  Fingers crossed.


The button on the sleeve of my jean jacket squeaks.  I discovered it one morning when I Stacy’s Random TV Thoughtshad my jacket on while I was brushing Princess Nagger’s hair before the last minute ‘Hail Mary’ dash out the door to wait for the bus.  I couldn’t figure out if I was hearing a mouse somewhere, or if one of the dogs was getting into something they shouldn’t be.

I knew it wasn’t that Norman, our cat, had caught any mice, because he just isn’t ‘into’ that.  When we actually did have mice, he let one walk right in front of him and didn’t budge a muscle.  Princess Nagger figured out where the squeak was coming from.  The button.  Now I can’t stop hearing it every time I wear the jacket.  And it’s my favorite jean jacket.  Wonder if WD40 will take care of it.  Might give it a try. 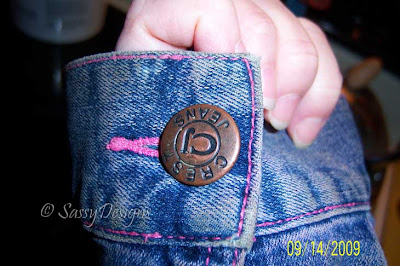 Yes, my favorite jean jacket has pink accents, including the thread.  In case you were wondering.

Has anyone else tried the ‘new and improved’ edit feature of Blogger?  I’m not liking it so much.  It’s taking me way too long to edit my posts, because it saves a draft every 30 seconds or so.  While that’s nice to have that ‘backup’ just in case, it slows things down and sometimes my sentence structure is severely lacking because I’m typing too fast and the editor isn’t keeping up.  Not to mention that for some reason it keeps eliminating every and all line breaks.  So my paragraphs aren’t separated when I want them to be.  I keep having to go back and re-add them over and over, only to have the editor take them back out.

I do like how you can upload more pictures at once, though, and it doesn’t throw them all at the top of the post…but I don’t like how you can no longer cut-and-paste said picture to a different location in your blog if you decide to move things around – you have to remove it, then put your cursor where you want it, and reselect it from the uploaded batch.  Talk about going around your elbow to get to your thumb.  On the flip side, at least Blogger is trying…

Speaking of trying…I guess I’m a glutton for punishment.  As if one blog isn’t enough, I’ve started another one.  Yep, I’m probably biting off more than I can chew, but I can multitask with the best of them…on most days.  So if you want to see what’s taking up some of my other non-existent free time, it’s over here:

Yesterday was a great day – not only did Princess Nagger willingly and without complaint go to school, but when she got home, look what was waiting in the mail: 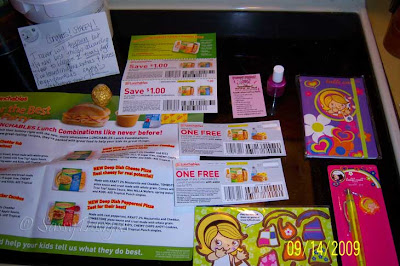 I won some Lunchables coupons from DiPaola Momma (aka Chicken Nuggets of Wisdom) and when she mailed the coupons, two of her darling children included some fun stuff for the Princess Nagger: 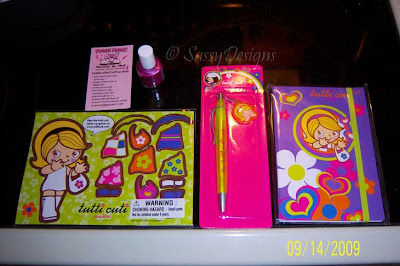 Wasn’t that sweet??  To DiPaola – Princess Nagger said to send your #2 and #3 big hugs and kisses from her, and she kept saying “Thank You!” over and over.  She had lots of fun playing with Tutti Cuti on the side of the fridge, wrote some notes in her new journal with her new pen, and painted her fingernails with the piggy paint.  She was in seventh heaven.  So not only did Monday turn out to be a good day, it was a great day.

Don’t forget to check out my Blogoversary Giveaway – just commenting will buy you a chance to win. 😉 Meanwhile, head on over to the Un-Mom‘s to check out all the other Random Cool People.  It’ll cause you to have a great day, too!

September is clipping along at a fast pace – I just realized it’s time to break out the fall decor to jazz things up around here. Of course with the inundation of smoke, that sort of was a mitigating factor … Continue reading →

Today marks the midpoint of September – so far it’s been a surreal year, and I for one will be happy to see it exit stage right. Little Dude has been having issues already the first week of school – … Continue reading →