After the hair-raising break-in on Monday, and even though A.C. Moore didn’t have Princess Nagger’s name appliqué in stock, the trip wasn’t a complete bust. They had a sale going on for their unfinished wood projects, so Princess Nagger decided she really needed to get a bird house to paint and put out for the birds so they’ll have a winter home.

She donned one of Dada’s old shirts and got to work: 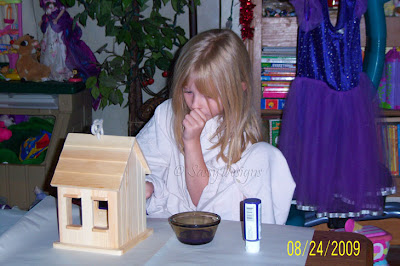 Purple is her favorite color, so of course she decided purple was the color of the day: 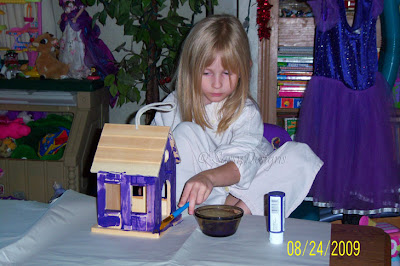 She also wanted to add pink accents, and originally was going to paint the roof pink, but opted to do half pink and half purple, then add pink polka dots and designs to the purple side. Then she was having fun ‘creating’ a ‘brand new’ color by mixing the pink and purple paint together. She kept asking every five minutes if it was dry yet, and didn’t like having to wait until the next day to hang the house up for the birds. She did enjoy playing with it that night, though, as she let her little dinosaurs and bears inhabit the house and marveled at the fact that it’s technically a 2-story house.
The next day she wanted to put the house up first thing, so I armed myself with the drill to attach it to the grape arbor…you’ll note that she added bird seed on the top and bottom of the house, because she wanted to make it ‘convenient’ for the birds so they didn’t have to fly over to the bird feeder to eat. She also added a cracker just in case they were ‘extra’ hungry: 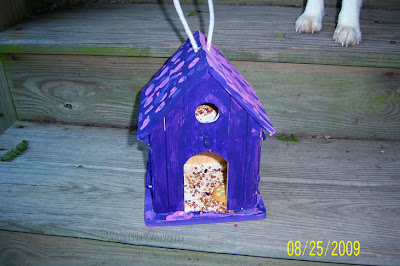 Travis was showing great interest in the house – I think he thought it was a treat house just for him: 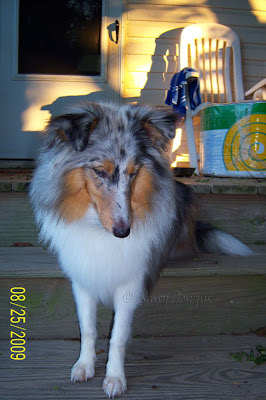 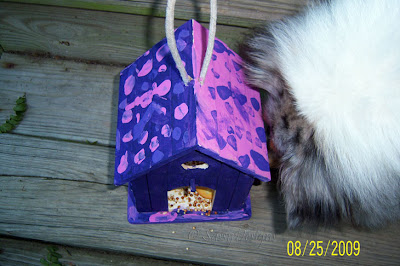 The house is now successfully hanging on the grape arbor, awaiting the first bird to decide to make it its home. Princess Nagger was a little disappointed that there wasn’t already a bird living in there by the end of the day…she was afraid they didn’t like the paint job. I reassured her that it was beautiful, and that they were probably waiting until the dogs weren’t around to inspect the new abode. 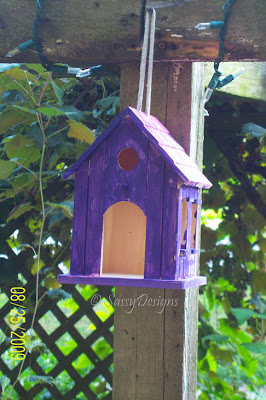 I’ll keep an eye on things, and if any of the birds decide it’s a great place to live and build a nest in it, you’ll be the first to know. Well, first after Princess Nagger, of course!
For Wordless Wednesday, be sure to visit Wordless Wednesday, 5 minutes for Mom, Go Graham Go, JollyMom and Momspective for more great Wordless Wednesday Posts. Mr. Linky has been having issues lately, so be sure to leave your post link in the comments so we can pay a visit! 😉