Mother Nature has been giving us some hot and humid weather. It’s been the kind of heat that zaps the energy right out of you, so Princess Nagger and I have been hanging out in the air conditioned room goofing off. Yesterday was no different, the highs were supposed to be around 90-ish and above, so we were playing some video games to pass the time, even though it was warmish in the living room.
I thought Princess Nagger was trying to pull a prank on me when she said “Look! It’s 150-degrees outside!” pointing to the weather monitor thing we have hanging on the wall. I thought she was trying to distract me so she could swipe something of mine, like my vanilla coke, or something, you know, like saying “Look! There’s a unicorn over there!” *giggle giggle* She was very insistent that I check it out, so I did, and was greeted with this: 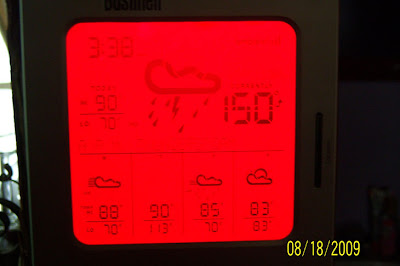 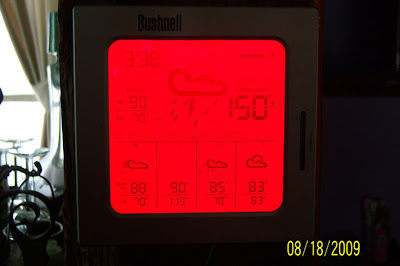 I also took a picture with the flash so you could read it better: 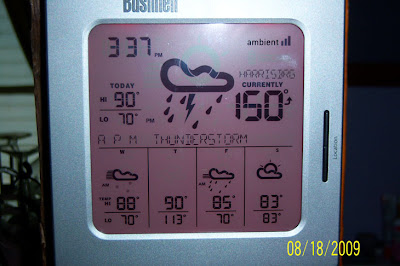 There aren’t any ‘city settings’ near us, so the closest we go by is the capitol of PA. Apparently the satellite was all messed up – maybe a sun spot or something was causing interference with the actual temperature, but it was pretty funny to see that it was 150 degrees and rising…and the high for tomorrow is showing as 88 with scattered snow… I scrolled down one city to see if it was messed up there, but apparently the satellite for Philadelphia was fine: 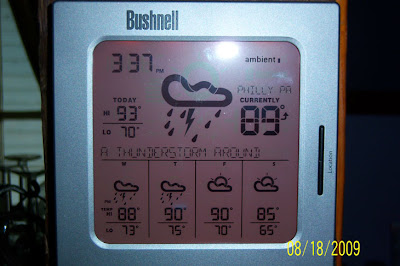 While I was taking pictures, Princess Nagger was thinking out loud:

PN: “Is today Wednesday or tomorrow?”

PN: “Oh, this will be perfect for you to put on your blog for Wordless Wednesday!”

So there ya go. Wordless, Wordful, Whatever Wednesday – Princess Nagger was thinking of all my readers.

As I was putting this post together, a major thunderstorm swept through and cut off our internet and power…luckily it came back on long enough for me to finish the post and schedule it, so here’s hoping by the time you’re reading this, Mother Nature has moved on to wreak havoc elsewhere. 😉