Keely put the ‘Un’ in ‘Un-Mom’…wait, that doesn’t sound very nice… Keely put the ‘Mom’ in ‘Un-Mom‘…nope, that’s not right either. I could say she put the ‘dom’ in Random, but that still doesn’t work… Whatever, she’s cool, she’s anointed Tuesdays for sheer randomness, so get your random on with Keely…

Our yard is looking like a wild jungle. Mother Nature keeps deciding that it’s the perfect time to hit us with lots of rain – by way of crazy storms – when either hubby or myself actually have time to get out and mow and take care of the weeds. I could run the tractor during the week (like yesterday) while hubby’s at work, but he still hasn’t replaced the belt, therefore it will only mow half a path…it would take forever doing a halfway job, so it simply hasn’t happened. At all. For 2 weeks.

I don’t like the push mower because it’s self-propelled and always likes to try to get away from me. I’ve inadvertently mowed down some of my flowers when I’ve attempted to use it, or gotten too close to the invisible fence wire that needs to be re-buried in the yard…so I stay away from that monstrosity. Hopefully hubby will get the belt for the tractor soon, or we’ll have to go out and tackle the yard with scythes or machetes. That would be kinda cool, actually…

It’s that time of year, if you are in a hurry you’ll end up stuck behind one of these here in Small Town America: 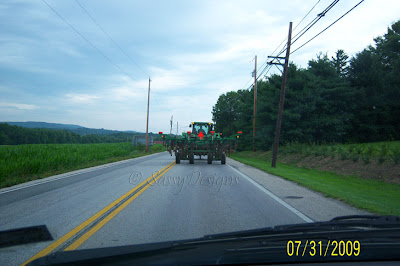 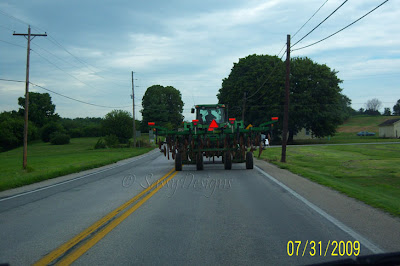 I was amazed the guy didn’t take out a pole or an oncoming car – he owned the road and the oncoming cars pulled off to the side to let him pass. Pretty impressive, really. There was a kid riding in the cab with him who kept giving me funny looks as I was following taking pictures with my camera propped up on the steering wheel. I couldn’t resist, after all, I had to follow him for more than 5 miles at 10 miles an hour…

My laptop was locked in the summer house all afternoon on Friday…or I should say I was locked out of the summer house with my laptop inside. The lock gets funky, and sometimes sticks…so in order to open the door, one has to climb through a window to get it open from the inside. I figured it’s Friday, hubby usually gets home early on Friday’s, so I’d just wait for him to climb through the spider web window… Besides, it was pouring down rain and I wasn’t sure I’d be able to get the window open. Luckily I had stuff to do in the house after grocery shopping, and when I got back from picking up Princess Nagger from Day Camp, hubby was home and had the Summer House open again… I was happy I didn’t have to dance with the spider to get my laptop back.

I had started to write a post last week about Princess Nagger’s Day Camp Blues, but scratched it. It was getting way too long, and I was bored by it, so I didn’t want to subject anyone else to it. Let’s just say she went on Monday, I had to stay for an hour that morning before I could sneak out without her noticing I was gone, and yet she still was upset that night – and did not want to go the next day. Or the next one.

I convinced her to go on Thursday because they were bringing in a horse for the kids to ride and learn how to groom, so she went…albeit reluctantly. She did go Friday because it was the field trip to ‘The Land of Little Horses’ – no way was she going to miss out on that. Of course when she got on the bus she instructed me to stand on the sidewalk in that exact same spot until she got back. Yeah, that didn’t happen. I had my bi-monthly grocery shopping to do and was looking forward to doing it ‘kid-free’.

Next year we’ve decided that if she wants to go to Day Camp, we won’t pick the week that they have it at the elementary school – how boring is it to be stuck in the cafeteria all day save for a trip or two out to the playground? That would seem like detention or Summer School to me, so what’s the fun in that? At least during the month of August they can’t have it at the school since the school is getting ready for the start – so they have it over at the community center…way more fun with ping pong tables, Foosball tables, pool tables, puzzles, games, air hockey…you name it, they have it. Princess Nagger definitely enjoyed the day much better over there on Thursday. At least she went 3 out of the 5 days so paying for the entire week wasn’t a total loss.

Hubby handed me this when he got home on Friday: 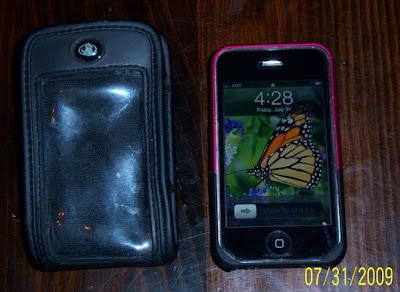 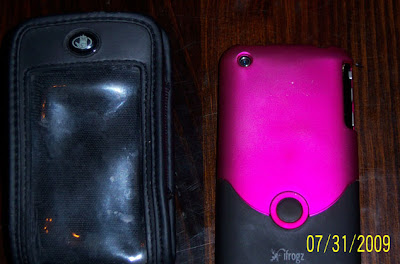 Yep, it’s a fuchsia iPhone. I thought he was surprising me with it as a gift, but alas, it was someone’s lost iPhone he found in the parking lot of Staples getting rained on. He doesn’t know how they work, so he asked me to see if I could figure out who it belonged to. Is it just me, or doesn’t everyone usually have ‘Home’ in the contacts? I always do on my cell phone, but this one didn’t. So I scrolled through the contact list and selected an ‘Aunt’ number – there were no bars in our house signal-wise, so I called from the land line.

Mass confusion ensued, of course, when I asked to speak to…let’s call her Aunt Betty. They speculated on which niece of theirs lost her phone, and gave me another number to call (not the owner of the phone, but her brother). So I called and left a message. Then I thought I’d better call AT&T to let them know I’m in possession of a lost phone. More confusion ensued. Eventually the brother stopped by to pick up the phone, so it’s safely back with its rightful owner. What amazed me was how flabbergasted everyone I spoke with was about the fact I was trying to find the owner. I guess there are too many people out there that would have thought they scored with finding that phone, but I’d rather get one the honest way – you know, like for my anniversary, which is today. Not gonna happen, but one can dream.

Go Forth and Be Random! Try it, you’ll like it!