I really hope Blogger and Google and whomever else that keep messing things up fixes those things soon…it’s been quite challenging trying to get around to different blogs this week to read and comment. The list of blogs on my dashboard disappeared, then when they came back comments weren’t able to be left, then after that was fixed, Google was blocking blogs with an error message encouraging you to ‘try back in 30 seconds’. So my visits around the blogosphere have been spottier than usual…but I’ll be by – when you least expect it! 😉
******************************

How is it that one can spend hours cleaning and organizing, only to have someone who looks this innocent cause what looks like a tornado went through the room in less than 5 minutes? 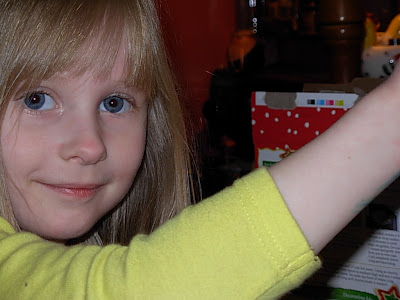 It’s almost as if she has a special radar – when she’s upstairs playing, I’m surreptitiously cleaning and organizing the mess she made with her toys in the living room. Hauling some of the toys upstairs to her room so there’s less clutter on the main floor. Not 5 minutes later, she’ll come downstairs, her arms laden with different toys and stuffed animals, happily proclaiming 220;Look what I found in my room!” and proceed to scatter more toys and ‘stuff’ all over the living room. A never-ending cycle. 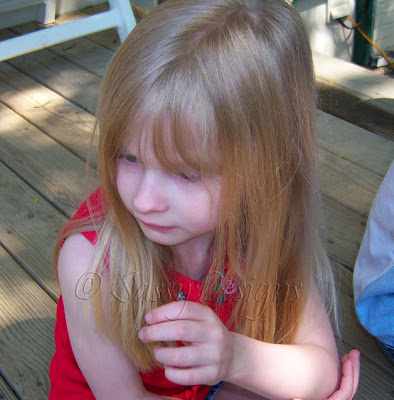 I’m counting down the days…only 12 days until school starts. Then the house will stay clean for more than 5 minutes, and I’ll not get interrupted every 5 minutes. Though I bet it won’t be long after she starts that I’ll miss those interruptions during the day. Although we’ll be adding a new element to the ‘interruptions’ – only 2 days until we pick up the new puppy. Next week you’ll get to see pictures and find out what we’ve decided on a name. It’s pretty cool if I do say so myself. 😉

I had my annual physical yesterday…aren’t you jealous of all my fun? 😉 My doctor is a bit concerned on the looks of some of the beauty marks that showed up on my back and belly when I was pregnant…so she’s referred me to a dermatologist to make sure there’s nothing to them. So that will be another fun appointment on the 26th. Tomorrow I get to experience PBS – Pancake Boob Syndrome with my second ever mammogram. See? I’m having all the fun! My mom discovered a lump in her breast years ago that turned out to be nothing, so at least there’s no worry there for me, but it’s better to be safe than sorry.

At least the visit to the doctor revealed one great thing – down another 5 pounds. So attempting to be conscientious with the Wii Fit and eating healthier is really doing the trick. Although this week has been rife with running around and entertaining the Princess Nagger and going to various appointments, so I haven’t had a chance to actually use the Wii Fit this week, but I’ll be sure to add the extra activity the next time I’m on it – that way the annoying Wii Fit trainer will be forgiving of me avoiding it this week. 😉

When Julie isn’t getting beaned in the head trying to be Super Woman, she’s trying out cool new games. She’s the pusher of my addiction to try new work-out-ish type games. She’s now touting the fun of Wii Sports Resort – and of course it sounds like it’s right up my ally. So I think I’ll be asking hubby to get it for me as a belated anniversary gift. 😉

Princess Nagger: “You want to play paper dolls with me, Mama?”

Me: “Sure…let me finish reading this one blog post and leave a comment, and I’m all yours.”

PN: “But I want to play nowwwwww!”

PN: “How many seconds is that?”

Me: “It’s hard for me to read when you’re counting out loud – why don’t you count it in your head?”

PN: “But I’d rather count it out loud so I don’t lose my place.”

Me: “You won’t lose your place counting in your head…I don’t think…besides, if you’re counting out loud you’ll be too distracting and it’ll take me longer than 5 minutes.”

PN: “That’s a great idea. You know, they really should call them ‘cardboard dolls’.”

Me (giggling): “You do have a point…they might call them paper dolls because their clothes are usually made out of paper with tabs to change their outfits.”

PN: “But these already have their clothes on…see? They don’t have any other clothes to put on them, and they’re made out of cardboard. So they really should be called ‘cardboard dolls’.”

The ‘paper dolls’ she’s refering to are the new Happy Meal toys they just started this week of the American Girl series. A tiny book with a story, sticker activity, and tiny paper dolls – ahem – cardboard dolls fully clothed.

A special thank you to Mrs. 4444 at Half Past Kissin’ Time for fun Friday Fragments, Sara at Ordinary and Awesome for Friday’s Freewrite, Wii Mommies for Fitness Friday, and Ann Again and Again for VGNO.

Pausing to remember those who lost their lives or loved ones on this day eight years ago. We will never forget. Now back to our regularly scheduled program… Is it Friday already? What happened to this week? Besides major chaos, … Continue reading →