Meet ‘See Ya Later‘. Yes, that’s his name. Princess Nagger deems it so. 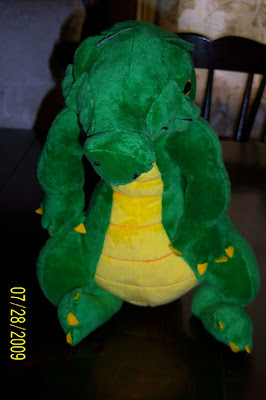 When we bought ‘See Ya Later‘, the zipper was already broken*. But that didn’t deter Princess Nagger, because, well, Mama could sew it. After we got home from vacation, poor ‘See Ya Later‘ sat on the bar for over a week. I told Princess Nagger I’d be happy to sew it as long as she picked up her toys in the living room. ‘See Ya Later‘ had to wait. And wait he did. Until this past Tuesday. Princess Nagger came out to the Summer House and proudly announced:
“Look Mama! You don’t have to sew See Ya Later! I already fixed him! Didn’t I do a good job?” 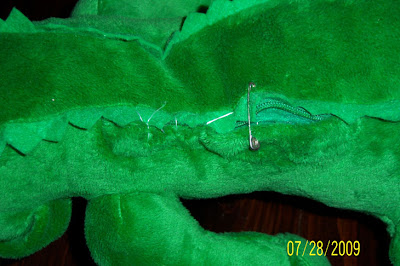 Without actually being shown how, Princess Nagger had figured out strictly by observation how to do a stitch. And since she ran out of thread, she used a safety pin. Proof positive that they are like little sponges, soaking up everything around them. I praised her work highly, of course, then she asked me if I could please teach her how to tie a knot without tying a knot, since I had mentioned that I’d show her how.

I offered to sew the back of See Ya Later with green thread so it wouldn’t be noticeable. She was quite happy to observe me doing that, though she did kept saying “How much longer is it going to be?” “Are you done yet?” “Why is it taking so long?” But See Ya Later was finally sewn whole, and Princess Nagger was happy: 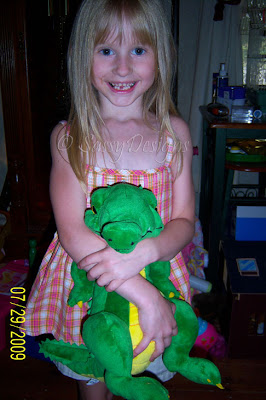 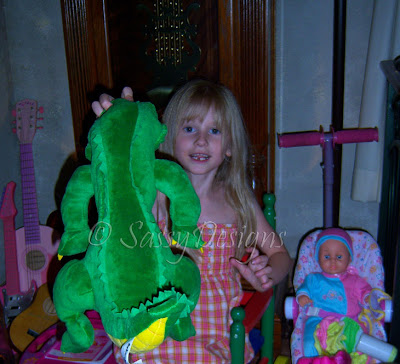 Then she decided it would be fun for See Ya Later to attack Mama since I kept taking pictures: 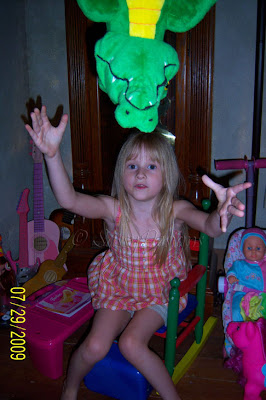 *The Back Story behind the alligator:

Each year when we go to Louisiana to visit our friends, one of our regular stops is to spend the day at The Fun Farm. They have a booth there that is similar in idea to Boyd’s Bears. You choose which animal you want, you help stuff it, then they give you a star to wish on and place inside the stuffed animal. They then close the locking zipper and give you a cardboard ‘house’ for your new stuffed animal, as well as a Birth Certificate. Princess Nagger gets a stuffed animal every year we go down.

This year, she saw the alligator on the shelf. Since the Alligator Farm we usually visit had changed their ‘minimum number of tourists’ to 10, we weren’t able to go. So she chose the alligator for this year’s stuffed animal treat. Unfortunately, it was the last one they had, and the zipper was broken. Undeterred, she went with her second choice, a horse. None in stock. Third choice was a duck – only one left, it too had a broken zipper. This continued through several different animal choices, until she finally chose a mouse.

You could tell that she was a bit disappointed in getting her 7th choice vs. her first choice, so hubby pulled the manager aside and haggled over the broken zippered gator. The manager acquiesced and sold the alligator to us at a discount. Princess Nagger was disappointed that she couldn’t play with it until it got sewed, but understood we’d have to wait until we got home. 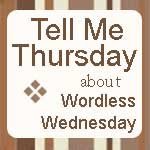