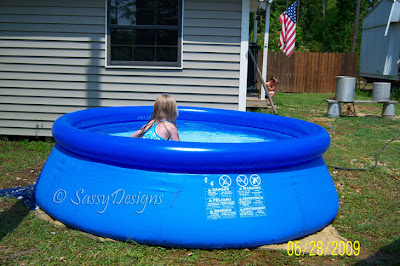 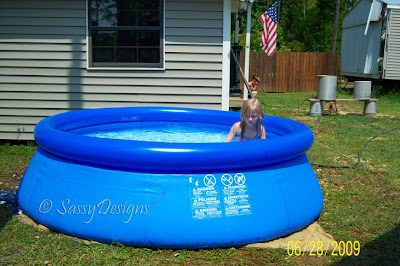 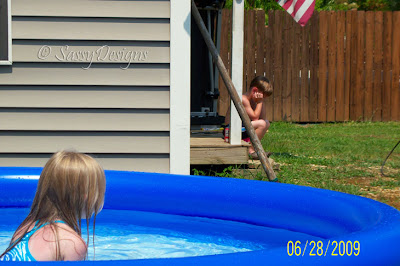 Princess Nagger was happily swimming in the very cold water in the pool – ‘very cold’ because the day before Luke thought it was a good idea to pee in the pool while swimming…eh, not so much. So the pool had to be drained and re-filled…of course it was really cold after the refilling, but that didn’t deter the Princess Nagger from splashing about happily. Luke joined her for about 5 minutes, then decided it was too cold for him – he asked me if he could play the Wii, but I told him to ask his mom since he’s been getting in trouble for too much Wii play and not doing other stuff – like cleaning his room. The answer was ‘no’, as evidenced by the enormous pout shortly thereafter. 🙂

Thanks for stopping by and commenting – as some of you know I’m on vacation until next Wednesday, so getting around to leave comments is not happening like I would like, because of no internet connection. I’ll have some major catching up to do when I get back next week! 🙂
See more photos worth a thousand words at Cheaper Than Therapy:

I’m doing things a little different today…this is a video I took of the Princess Nagger September 2007 (which was just a couple of months before her 5th birthday) – Hubby and I were hanging out in the Summer House, … Continue reading →

First Day of Kindergarten 2008: First Day of First Grade 2009: Yes, I cut Princess Nagger’s hair this weekend to be ready for school – I didn’t realize I cut it to about the same length she started kindergarten with…I … Continue reading →