Have you ever had one of those days where nothing goes as planned? Where you have all these amazing plans and lists and ideas and hopes and dreams and nothing pans out like you hoped? Well, that was my week. Mostly.

All that rushing around last week to make sure Princess Nagger got to go to Day Camp this week (read: so Mommy could have some Me time and get stuff done) was for naught. Well, mostly. I’m still fumbling around with a blog post about that whole fiasco without it becoming dry and brittle, but suffice it to say Princess Nagger went to Day Camp on Monday. And reluctantly on Thursday. And is really excited about going today since they’re going on a Field Trip. Her last day. Of course today I get to do my bi-monthly grocery shopping, so that sort of negates any predisposed ideas of ‘Me’ time. It probably didn’t help that both Princess Nagger and I were suffering from PMS this week, but we did have some great bonding time Tuesday and Wednesday, so that makes up for it in spades.

I want to extend a HUGE Thank You to everyone for their kind and generous comments on my Top 10 post last weekend, and to COZI for having the contest in the first place. I was one of the 15 winners of said contest, so COZI will be my very first sponsor for BlogHer 2010! I can hardly contain my excitement – wonder how I’ll manage to contain it for the next 12 months? I’ll be making my way around to all 86 of you at one point or another to express my thanks… 🙂 And yes, my BH10 roommate blueviolet was also a winner – so we’re both extra psyched.

The breeder sent an updated picture of our new puppy. The “Puppy Count Down” has begun…only 16 more days. 16 more days to ‘puppy proof’ the house again, 16 more days not to have pee and poop on the floor, 16 more days before we bring this little guy home: 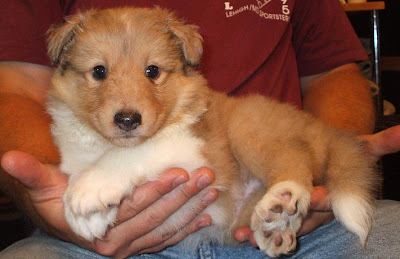 Is it just me, or do his paws look unusually huge for a Sheltie? This was a picture we got of Travis when he was about the same age: 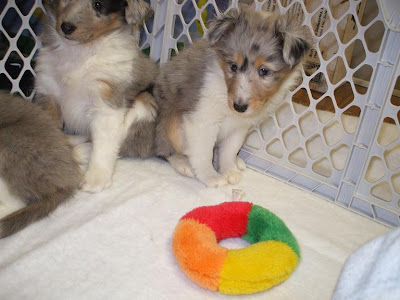 And the day we brought him home: 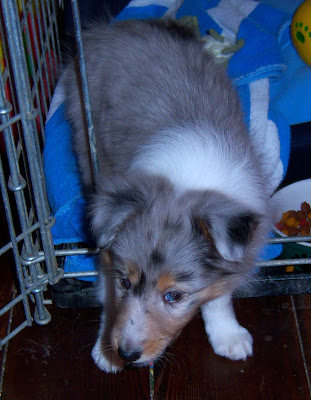 I don’t know, but to me it looks like the new puppy has ‘meatier’ paws. Should be interesting! 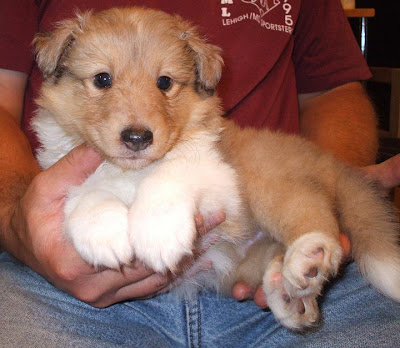 Have you ever tried to write a blog post and keep your train of thought straight, only to have it thwarted by another voice in the room spouting off random information you don’t need to hear while said voice is reading his own stuff at his own computer? No? OK, it’s just me then.

The weeds in my yard and garden have formed their own massive army and are plotting against me. The faster I pull them up, the faster they grow. Of course Mother Nature is apparently on their side, because she’s been making sure it’s unbearably hot during the daylight hours to thwart any notion I would have of being out in the yard, then watering the weeds with a passion during the night. They even get their own light show for entertainment. I’ve got my work cut out for me this weekend to regain control. Wish me luck.

Today is my mom’s birthday – if you happen to be reading this, Mom, Happy Birthday and I love you lots! Your birthday present will be mailed out as soon as I can find where I hid it… Ahem. Luckily my mom and dad are used to me being late sending them their gifts – dad knows his gift from March will be arriving with Mom’s gift…before Christmas, anyway. It’s tough when you live almost 3000 miles away – and even though I buy their gifts well in advance, I end up putting them in a ‘safe’ place and forgetting where I stashed them. I need to not hide them so efficiently.

Me: “I can’t remember any good jokes right now…”

PN: “That’s OK, just start talking and when I start laughing, it’ll be a joke.”

Me: “I’m still not following you…”

Thanks to Mrs. 4444 and Sara for enabling this Friday Mishmash. If you want to read some incredibly interesting and funny people, head on over to Half Past Kissin’ Time and Ordinary and Awesome – feel free to join in on the weekly brain dump. I can’t think of a better way to spend a Friday.