It’s Friday, and you know what that means, don’t you? I can be as discombobulated as I want, because Mrs. 4444 said so – and it’s confirmed by Sara, too! Nothing like being validated for being freely fragmented… 😉 Seriously, though – Mrs. 4444 is the hostess with the mostest over at Half Past Kissin’ Time with Friday Fragments, and Sara always has something going on over at Ordinary and Awesome, today it’s Friday Freewrite. You’re getting two for the price of one!
So yesterday I only got to do half of my bi-monthly grocery shopping. I know some of you think I’m crazy to only grocery shop twice a month for the entire month (Justine), but I actually like being able to have it all done and not have to go Every. Single. Week. Or more than once a week. It’s hard enough to cajole Princess Nagger into going twice a month, forget about convincing her to go several times…besides, bribery can get expensive. And there are enough crazy people at Wal*Mart to warrant limited visits there. I divide my grocery money and time between Wal*Mart and BJ’s – because the local grocery stores that are only slightly closer are waaaay more expensive.

So anyway, back to yesterday…first stop, Wal*Mart – I pulled into the perfect parking space close to the front, put it in park, covered my windshield with one of those windshield cover thingies so the steering wheel wouldn’t burn me when we got done…and remembered that I forgot. I forgot the coupons I had painstakingly cut out for BJ’s, but worst of all, I forgot my list. Yes people, I make and use a list – keeps me primarily on budget, and helps me not to forget things. Mostly. Wait…what was I rambling on about?

Of course I wasn’t going to drive all the way home to get those things, I told Princess Nagger we’ll just wing it. I decided I’ll just have to go to BJ’s today so I can take advantage of the coupons for the rest of the stuff I want need. Yes, I forgot some of the things on my list at Wal*Mart, so it’ll be “Wal*Mart, Take Two” today. Maybe they’ll have had time to restock some of the shelves that were empty…you know, like my French Vanilla creamer – hello?! Wal*Mart? You had a ton of empty shelves yesterday, and it wasn’t Monday, your usual “Empty Shelf Day”. If there are still a bunch of empty shelves today, Friday, you’re going to make some people really angry. Sure, you’ll probably be able to outrun 99% of them, but they’ll still be angry. I can’t think of anything scarier than an angry Wal*Mart Mob.

Hovering Hubby has a musical talent that boggles the mind. That boy can pick up any instrument and start playing like a pro by ear. I wish I had even an iota of the talent he does, but alas, I was not gifted in that regard. Fresh out of high school he even had the opportunity to tour with Peter Frampton one year when Frampton was in need of a bass player. He was part of a rock band during his college and after-college years. When we first moved out here, he joined a Country band – big change. They played out regularly until the leader of the band had personal issues, so they disbanded the band after 9 years. Now he’s hooked up with two other guys and they’re writing original Christian Rock music. Bigger change.

If you want to hear some of their music, feel free to hop over to Three Nails on soundclick. You can also check out there official website here. There, I’ve done my duty – Hovering Hubby has been asking for a while when I was going to mention them on my blog, so there ya go. 😉 They haven’t been around long, but earlier this week were contacted by a recording company and sent a contract – we’ll see where that goes.

The time has come to filter and bottle the Blackberry Merlot I’ve had aging for about 9 months. So you know what I’ll be doing this weekend. *hic* I just got a new shipment of brand new empty wine bottles yesterday, so I’ll be spending time cleaning and sanitizing them to be all ready. Of course there will be some taste testing going on…have to make sure it’s perfect before I start shipping them to customers after all! Besides, Dina from 4 Lettre Words is anxiously awaiting her order of this wine – I promise I won’t drink it all during the bottling process, Dina! 😉

Today is my best friend, Peggy’s Birthday – she doesn’t have a blog or a website (which means she actually has a life), but I’m pretty sure she reads this blog on occasion, so I better not forget to wish her a Happy Birthday here in cyberspace so she’ll know I’m thinking about her. Oh, and Peggy? Your Birthday present is late as usual… 😉 Next year maybe we’ll be able to schedule our Road Trip Adventure to be there in person to celebrate with you. One of these days I’m going to dig up some incriminating photos of us her from our party days and post them…stay tuned.

Oh, and be sure to send lots of warm thoughts to Casey, today’s the day she goes under the knife for her breast reduction surgery. My boobs hurt thinking about it. She promised to throw a post up over the weekend to let everyone know how she’s doing, so if she doesn’t, be sure to leave comments on her last post to annoy let her know you’re thinking of her.

I realized that I got through this whole post with nary a picture and I’m too lazy tired this morning to hunt for appropriate (or inappropriate) ones…so I’ll leave you with this parting shot of Travis sleeping on our trip home from vacation: 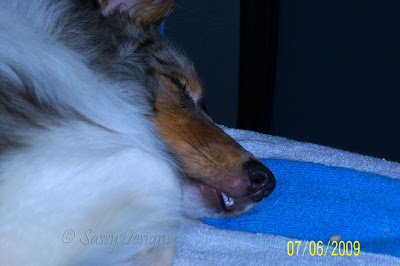 Don’t forget to stop by Half Past Kissin’ Time and Ordinary and Awesome for more Fragmented Freewrite Fun!

OK, I’m still getting back to ‘normal’ after our heat intensive vacation and the subsequent sinus infection, but I missed too many VGNO’s and look forward to blog hopping and partying like a Rock Star with all the peeps at Ann’s VGNO tonight. Sorry I don’t have my stuff together to serve you yummy food and drink this week, but next week for sure, I promise!

The question this week is what is one of the strangest dreams you’ve ever had? I’ve had some doozies, but I can’t remember them much anymore, which is probably a good thing! And certainly nothing like the Oprah dream Ann had! 😉

Why don’t you join the fun? Head over to Ann’s to join the Virtual GNO and check out all the other cool bloggers participating in this very special event. Anyone can join in the fun… Sign Mr. Linky and visit those that sign-in! Go blog-hopping! And most importantly, Have Fun! Well? What are you waiting for? 🙂

40 thoughts on “Friday Fragment Freewrite – Because I Can”