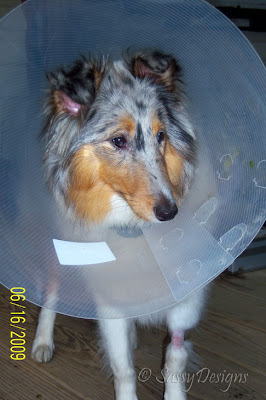 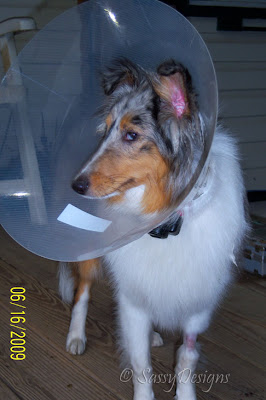 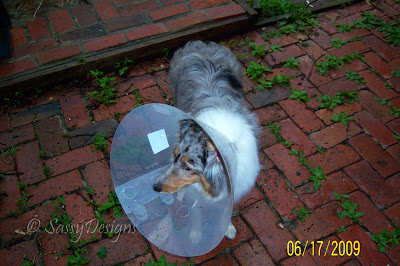 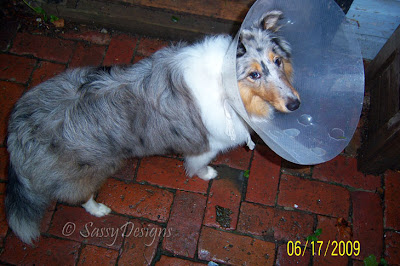 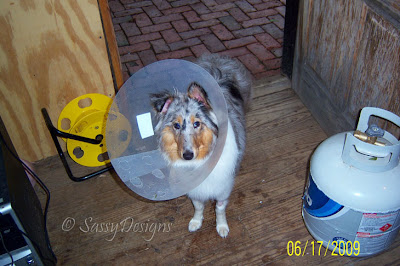 Travis did very well with his surgery – since the vet is also an animal hospital, they performed the surgery in the middle of the night Monday night since they didn’t get to any of the surgeries scheduled for that day. Poor Travis – I bet he was starving by the time they gave him any food the next morning – if they did. For the next few days he’ll be sporting this lovely collar – to keep him from chewing on his incision. No stitches, so at least we won’t have to go back to have them removed.

I’ll have to video tape him walking around with it, though – he keeps misjudging distance and gets hung up on doorways or furniture when he is trying to scurry by. He did fine sleeping with it on the last couple of nights, taking up a good quarter of the bed in the process. He was a bit groggy on Tuesday when we brought him home, but yesterday he was acting like his old self – trying to get the last bark in when the neighbor dogs were barking from inside their house.

I’m doing things a little different today…this is a video I took of the Princess Nagger September 2007 (which was just a couple of months before her 5th birthday) – Hubby and I were hanging out in the Summer House, … Continue reading →

First Day of Kindergarten 2008: First Day of First Grade 2009: Yes, I cut Princess Nagger’s hair this weekend to be ready for school – I didn’t realize I cut it to about the same length she started kindergarten with…I … Continue reading →