This week started off……not how I anticipated it to. Hovering Hubby decided at the last minute to take this week off to get some stuff done around the house and to burn some of his vacation days that are in jeopardy of the ‘use or lose’ mode before the end of this month. You know how you have those mental plans of getting certain things done? Well, I had those mental plans for yesterday since I would have the whole day to myself – hubby at work, Princess Nagger at an all-day field trip. Best laid plans and all that jazz. So of course I had to reorganize my mental status being that I can never get anything done with Hovering Hubby hovering.
So the Princess Nagger was supposed to have an all-day field trip to the Baltimore Aquarium. She loves watching fish and she’d been excited for weeks about this momentous trip, winding down the school year making the first of her last three days of Kindergarten extra special. She even made sure I got her bag lunch ready on Sunday, so I wrote her name all fancy schmancy on the bag and put it in the fridge waiting for the next morning. She groggily willingly got up at 7am (remember, she’s not a ‘morning person’) since she needed to be dropped off at the school between 8:15 and 8:25 because the buses were leaving at 8:30. She happily munched on Princess Toast and impatiently waited until it was time to go.

When I pulled into the school parking lot at exactly 8:13, I noted that the parking lot looked way too empty, the vice principal and two other staff members were standing on the sidewalk in front of the school. I didn’t suspect anything was amiss, I assumed they were greeting all the excited Kindergartners for the trip. Except. Where were the gaggle of kids? I assisted the excited Princess Nagger out of the vehicle and walked her up to the sidewalk – only to have the Vice Principal deliver the bad news. The field trip had been canceled and the school was on a two-hour delay with modified Kindergarten. Whaaaaa?

Apparently some morons decided it would be a great idea to vandalize the school buses by letting the air out of the tires of 50 of them over the weekend. The field trip was off, but they were attempting to reschedule it for today. I cannot even begin to tell you how extremely disappointed the Princess Nagger was – she started to cry on our way back to the vehicle, then wailed on the way home. It was the longest 5 minute drive ever.

Poor Princess Nagger – so it would stay clean in case the field trip did get rescheduled for today, I had her change out of her bright orange school T-shirt she was supposed to wear for the field trip. She was crying the entire time, then threw herself in my arms and wailed “This is the worst day of my whole life!!” It broke my heart. Then I had to figure out how to distract her from her severe disappointment. I had plans of doing the bi-monthly grocery shopping in a leisurely mode instead of split between 2 days since I didn’t have to worry about the Princess Nagger only being gone for 3.25 hours.

Hovering Hubby taking this week off at the last minute worked out really well – luckily the Princess Nagger was more interested in going with him to run the few small errands he had to do so I could fly solo and get the shopping done unencumbered. It was still a race to the finish, as I promised her I would return before her bus got here and bring her a Happy Meal.

Then the next disappointment struck. Normally I check to make sure the order is correct before I leave the McDonald’s parking lot. This McD’s has a tendency to mess up the order. I figured since they actually got my ‘no salt fries’, they must have gotten the rest of the order right, too. Wrong. There was no toy in the Happy Meal box. None. Nada. Zilch. How in the world do they forget the freaking toy?! They’ve accidentally put fries in the box instead of apple dippers, or a cheeseburger with extra onions instead of chicken nuggets, but rarely do they forget the toy. I called after the discovery was made and was told that the next time I’m there to just ask for an extra toy. They didn’t need my name or anything, so I wonder if that will work more than once? I’m sure tempted to try out that theory…

I called the school to find out if the aquarium trip had actually been successfully rescheduled – they weren’t able to change it to today, they rescheduled it for tomorrow instead…the last day of school. But wait – what about the ‘special program’ that was happening on Wednesday? Sort of a Kindergarten graduation ceremony of sorts (Princess Nagger let the cat out of the bag by telling me that her teacher had even made them graduation caps), where all the parents are invited and the kids sing songs and recite poetry…

When I pressed for more details about the fate of the ‘special program’, the secretary at the elementary office was cryptic in her reply…she said that there will be a piece of paper in Princess Nagger’s backpack explaining what the changes would be. Huh. OhhhKaaaay…whatever. Hubby and I speculated that it would be changed to today – he was a bit peeved about that possibility – what if he hadn’t taken this week off and had only planned to take Wednesday afternoon off for the ‘special program’? He would have been up a creek because he wouldn’t have found out about the last-minute change until he got home from work last night, which wouldn’t give him sufficient time to switch the time off…so good thing he took the week off.

That magical piece of paper confirmed our suspicions – the ‘special last-day-of-school program’ is rescheduled for today. And the time is two hours earlier than it was originally scheduled for tomorrow. Luckily I dug out my video camera and charged it up a day early – I had to pull prior videos off of it so I’d have room to record more, and since it’s fairly new, I hadn’t even installed the software on my computer yet. So I had to scramble last night to get it done so we’d be ready to capture those special moments.

At least it could have been worse – an elementary and middle school in the next township over had to close as of today for the remainder of the school year. Apparently there is one confirmed case of Swine Flu and several ‘developing cases’. I’m so glad we’re not in that school district, but it’s still too close to home.

At least by last evening Princess Nagger seemed to have forgotten ‘the worst day of her whole life’ as she happily watched her favorite show and scarfed on baked messy cheddar Sun Chips: 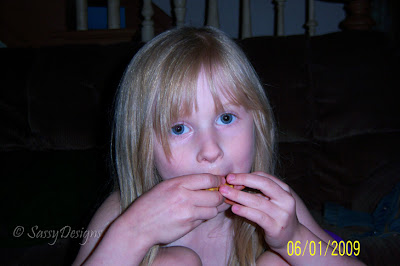 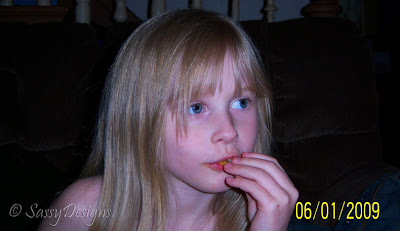 So the first day of this week was hectic at best – I’ve decided to toss all original mental plans for the week and simply fly by the seat of my pants and see how the week pans out overall. Tune in later this morning, once I have a cup of coffee or three, I’ll pull some Random Thoughts together for Keely‘s fun Random Tuesday Thoughts. If you have a bunch of Randomness and disjointed thoughts floating around, come on and join the fun – it’s a great excuse to not have to think straight.