Have you heard of Keely? If not, where have you been? She’s the notorious Un-Mom and she has this weekly thingy called ‘Random Tuesday Thoughts’ – seriously, it’s a great way of letting it all hang out on a Tuesday in the Random Way. You really should check her out…wait, that didn’t sound right…although I’m sure she wouldn’t mind if you checked her out, I hear she’s pretty hot… 😉

Here we are on Day 2 of Hovering Hubby’s last minute decision for a vacation week – and already I’ve been plagued with interruptions…it’s already 9:00 and I have only had a few sips of my first cup of coffee! Is it Friday yet? 😉

I’m looking forward to seeing what they have planned for their special ‘end of year program’ they had to reschedule for today – Princess Nagger has been secluding herself in the bedroom ‘practicing’ the songs and poems for about 5 days. She showed some of them to me the other day, and she’s so dorky cute with her dramatic motions to the songs and poems, so it should be a sight to behold. I’m definitely taking the video camera.

This weekend we worked like crazy out in the yard, taking advantage of the nice weather Mother Nature sent our way. Princess Nagger kept nagging me to do the grape vine trimming I had mentioned I was going to do, wanting to ‘help’ me with her plastic pruning shears. I finally got done with the other stuff I was working on and let her help on the baby vines in the front of the back yard: 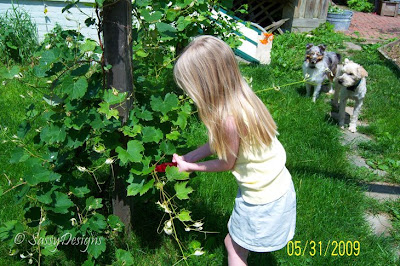 She got bored shortly thereafter, so she went off to play while I worked on the rest of the grape vines up front and out in the Back 40.

Hubby kept himself busy and finally tackled the odd ‘circle’ in the Back 40 – it used to have an above ground swimming pool there, then it functioned as our ‘burn circle’ for 2 years, then we rototilled it and planted grass seed last year and about half of it started looking good, the rest really patchy and still looked like a circle. So hubby got aggressive with the rototilling and discovered there was still some plastic and lots of rocks buried beneath the surface.

He successfully got it all cleared out and rotottilled a much bigger area just to make sure it ‘blends’ better as the grass grows. It’ll be great to see how it looks once the grass seeds sprout and the first time it’s mowed…no more eyesore! 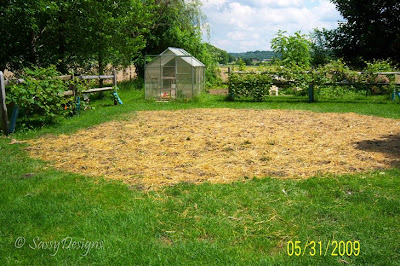 I started writing more and explaining some stuff in the above picture, but realized it was becoming non-random and more like a Weekend Garden post, so I’ll save that juicy story for this weekend. That way since I missed this weekend’s Garden Tour (sorry, Harriet!) it’ll make up for it. Trust me, you’re going to to want to check that post out when it’s done. It’s a doozy.

One thing you probably did notice in the picture above is that my greenhouse is still not functioning as a greenhouse this year…yet. Hubby had tried to ‘help’ me out after I built the greenhouse by spreading out the multiple bags of white marble rocks I had gotten for the floor. I had just had my gall bladder removed so I wasn’t allowed to lift anything more than 10 pounds for 6 weeks, and that was like a day or two after I hefted all the white marble rocks home to see if I got enough.

Unfortunately, he lived up to his ‘Absent Minded Professor’ title and spread the rocks out nice and neat…over the grass…without putting down any plastic underneath first. So basically he created a great venue for the greenhouse to function as a weed house. Not that kind of weed.

So I’ve been nagging bugging him ever since I found it difficult to grow seedlings and kill massive weeds all at once to take care of ‘fixing’ that faux pas for me. For two years. I gave up growing anything in the greenhouse last year because it was an uphill battle – trying to kill the weeds without killing my seedlings, so I resorted to using the bar in the living room as my temporary greenhouse last year and this year. He finally got the hint (and finally tuned in to the nagging). Today is the day – his staycation is going to benefit me as he mixes up concrete and seals the greenhouse floor once and for all. WooHoo! I’ll have my greenhouse back again!

Curses! Caller ID strikes again…sorry, Larry from Leisure World Pools and Spas for the mental block just now on the phone…hubby has been trying to find flagstone somewhere to finish the awesome stream he created and so far, no luck…not even from you, Larry.

Poor hubby, he keeps interrupting me as I’m trying to type this, and I heard something like: “Blah, blah, bliggety blah, don’t you think?” so my reply was “UmHmmmm….yeah…” then I hear “You’re not even listening to a word I’m saying, are you?” I couldn’t repress a snicker before responding “Not when I’m busy typing I’m not…now I’ve lost my train of thought!”

So I guess that wraps it up for this edition of Random Tuesday Thoughts, especially since now it’s already 10:30 and I have to make sure the Princess Nagger is fed and ready for her 12:13 bus and get myself ready to head over to the school to clap and cheer her on. And embarrass her by taking a million pictures and videotaping her. I might actually have some quiet time this afternoon to do some blog-hopping while hubby’s off hunting down flagstone and getting the concrete to work on my weed greenhouse…WooHoo!