This week’s episode of Random Tuesday Thoughts is brought to you in part by Keely, the coolest Un-Mom I know…well, in a virtual sense that is. Although she’d probably be a kick to hang out with in real life – you know, if I happened to wander into Canada for no particular reason. She gives us license weekly to be random with our thoughts…which takes the pressure off of having to dream up a normal post. So if you’re feeling abnormal, you’ll fit right in – join the rest of us abnormal people and get your Random on!
Guess what our neighbors found living under their shed? Four skunks!! They built a new pond out in their Back 40 (the neighbors, not the skunks), and apparently the skunks thought it was a luxury spa put in just for them…and they were well fed by the field mice in the corn field out back, as well as devouring our baby corn we had to keep replanting because it kept getting munched on…not sure if it was the skunks that ate the baby corn stalks, or the wild rabbits…either way, I’m not sure we’re going to get much corn this year. My hubby took these pictures of one of them hanging out in the row of pine trees between our property and our neighbor’s: 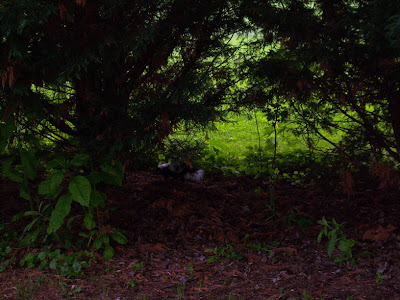 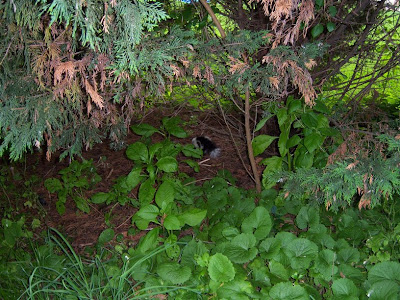 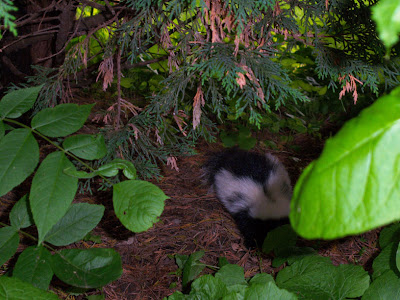 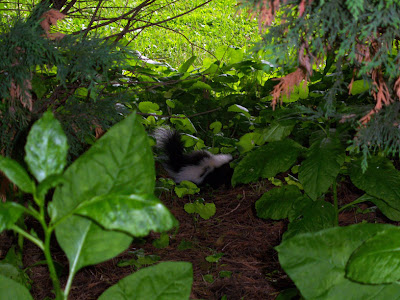 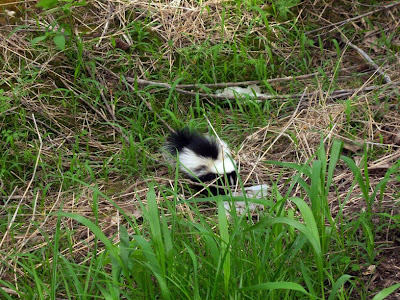 Our neighbor’s dad lives in the house on the other side of them, so he put out some live traps to see if he could catch the skunks…they were smart enough to avoid the traps like a plague, but somehow got duped into crawling into a garbage can. 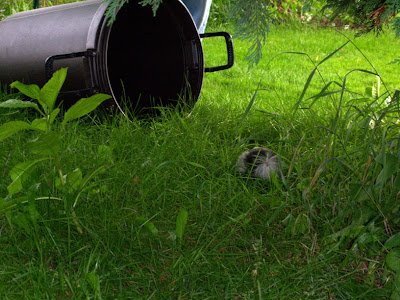 My neighbor’s dad was getting a bit impatient, so he decided to try to catch them with the garbage can himself: 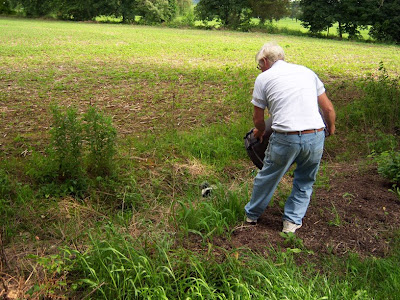 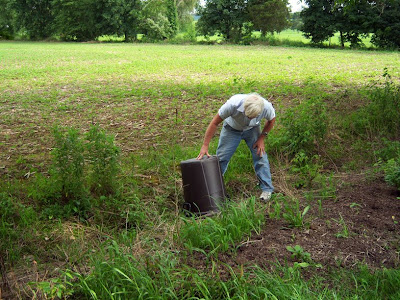 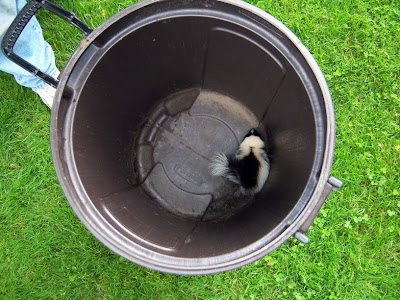 I was surprised he didn’t get sprayed…one down, 3 to go! By Thursday evening 3 out of the 4 were caught: 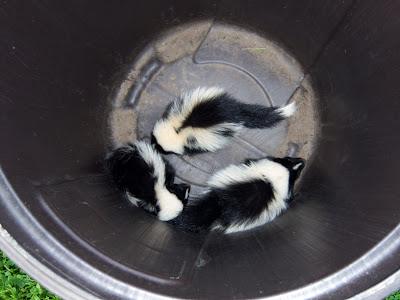 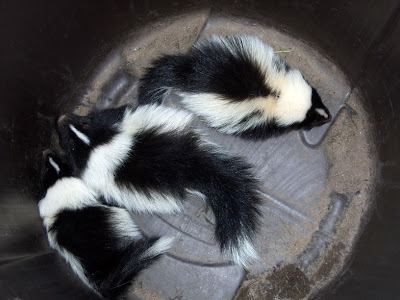 Aren’t they cute? Hubby was tempted to reach in and pet them, but decided it probably wasn’t a wise thing to do… Over the weekend, the neighbors discovered that there were more than 4…one of their German Shepherd’s got sprayed, which led them to discover that there were eight of them all together. As far as we know they successfully caught them all – I sure hope so, I don’t have enough tomato juice on hand should one of our dogs get sprayed – or one of us for that matter. Speaking of critters…Princess Nagger wants to get a kitten…you know, because the pet status is ‘uneven’ since we have 2 dogs and 1 cat. I’m stalling her request until after we get back from Louisiana – I’m hoping she’ll forget about it by then. 😉

Speaking of Louisiana, we leave in two days! Aaaaaaahhhhh! Am I ready? Sure, I’m ready for a vacation…but do I have everything organized and ready to go? Absolutely not! I work well under pressure, though, so I’ll get it all done. Maybe. Of course that might mean a repeat of last year where I’m doing all the last minute packing at 2:00 a.m. Thursday morning…but it’ll get done.

I wrapped Christmas presents yesterday – it felt odd and out of place to be doing that on an 85 degree day… It’s the Christmas presents I got for our friends we’re going to be visiting – we celebrate Christmas in July so we don’t have to ship the gifts during the holidays. I bought the gifts back then, but didn’t wrap them because I didn’t want to forget what it was I got them before giving them. Princess Nagger ‘helped’ – and she started pulling some of her oddball things to wrap to give to our friends, too…like a sand timer, a box of miscellaneous (and probably dead) batteries, some lip gloss for the baby (when I mentioned maybe she should give that little package to Aunt Christy instead, she responded with an eye roll and “But it’s lip gloss for kids!!!”). I thought it was sweet of her to want to generously gift her miscellaneous crap stuff.

Jenners posted about Twitter last week – it almost sounded like a challenge to hop on the Twitter Train if you dared to be so bold. Early on I used to get on there and Tweet and goof off, but then I found it was a huge time suck and I didn’t want to broach those waters again if I couldn’t do it justice. Well, I took Jenners call to action to heart and went through and downloaded TweetDeck and followed a bunch of people – what was odd was that a bunch that I started following last Thursday I used to be following several months ago…but I wasn’t following them anymore.

So if I used to follow you, and suddenly I stopped following you, it wasn’t me. There must have been a brain fart somewhere in Twitter that kicked me off your followers list. I’ll get back into the swing of things on Twitter – Julie‘s been bugging me to come back to the Twitter side, so I don’t want to disappoint anyone by ignoring their pleas… 😉 I’m trying to sync my cell phone to send tweets while we’re on the road – but we’ll see how that goes. If you care to follow you can find me @SassyDesigns.

I bit the bullet and had my hair foiled on Saturday. 3 hours and 179 foil pieces later, my hair looks terrible. She charged me $150 since she was using 2 colors – a light blond and a dark blond, you know, to give it a dramatic cool look. And she had to mix more color 3 times to apply since I have more hair on my head than the average person. Like enough to cover 2 or 3 heads. It doesn’t look it from my profile picture, because I’m talented that way. Subjecting myself to 20 minutes of blow drying to tame it down, then another 20 minutes with the curling iron because after blow drying, even though it’s tamed some of the natural wave into obedience, it’s still out of control.

Lately I’ve been attacking it with a flat iron which really brings it into submission. I keep it long, because the extra weight of my hair actually seems to help pull some of the natural wave out, giving me an edge on taming it into submission. If I were to cut my hair short and leave it in it’s natural curly/wavy state, I’d probably be vying for air space with Steenky Bee and her mane of hair. One of these days I’ll have to post a before and after pic – as in before I tame it and after.

Back to my bad foil job – apparently the gal foiling my hair went heavy on the dark blond, which happens to be darker than my normal blond color, and it’s dark all over. With sections of a nice deep purple hue when you get in the right light. Hardly any highlights at all, and none of my original blond. So I get to go back tomorrow morning first thing and have her fix it. The day before we leave on vacation. When I have a million things I need to get done before we go. But it needs to be fixed. STAT.

You may not realize this, but I can be painfully shy sometimes. Like when I first meet new people. I tend to be the quiet one, absorbing conversations and keeping to the background. Until I gauge the personalities and sense of humor, then I’ll get comfortable enough cut loose. Because I have a unique sense of humor that some people just don’t get. And I’m not comfortable being in the center of attention, so I don’t want to be a dork and say something I might consider witty and charming in my head, but when it’s spoken out loud it falls flat. So as I get more comfortable in the blogosphere, I’ll be more adept at leaving witty comments (or at least witty in my head) more often. Just so you know. 😉

Feeling Random? Then head on over to the Un-Mom for some awesome randomness. Join in the fun – you deserve a break today…it’s less fattening and more satisfying than McDonald’s… 😉

Welcome to Tuesday! Well, technically at the time of this writing, it’s still Monday night (on the West Coast, of course). I’m running later than I ever have before (unless you count the times I ended up writing my post … Continue reading →