Tuesday’s are brought to you by Keely, the hostess with the mostest for Random Tuesday Thoughts. Be Random. If you dare.
Things have been a little discombobulated around here. Hovering hubby taking vacation time on a whim, then scheduling other days to burn his vacation time that ‘expires’ on June 30th…but then changing those days at the last minute to different days has really had my head spinning.

Yesterday poor little Travis got dropped off at the vet to have a little snip-snip done…he wasn’t supposed to eat or drink after 11pm the night before – no problem, we made sure he didn’t get into anything…but yesterday morning of course we had to let him outside to do his ‘business’. So he drank his fill from the stream, and chowed down on some grass.

It wouldn’t have been a huge deal, except that it was the first time he’d been in a car since we picked him up as a puppy. Luckily I had a towel on the seat – although it was a towel I had the Princess Nagger sleep with so it’d have her ‘scent’ on it so we could leave it with him at the vet in case he had to spend the night. He barfed all over it. Watery grassy barf. I kept getting the run down from the back seat from PN:

PN: “Partly on my seat, on the towel and on his foot.”

PN: “Ewwwwww! He just barfed again!! Lots of watery barf! And he must have ate some grass! Ewwwwww!”

Me (laughing): “Guess he wasn’t paying attention to the no eating and drinking after 11:00 last night…but at least he’s getting rid of it before we get there, so that should be good!”

PN: “Gross, Mama! He just did a really big barf – it’s a watery barf and I don’t think it’s going to stay on the towel! And he still has barf on his foot!“

Luckily we were just about there – the barf did stay on the towel, and there was very little on PN’s seat so all was good. Poor Travis. But the vet called about 4:00 to let me know that they hadn’t gotten to any of the surgeries for that day and wanted to know if it was OK for him to stay…Princess Nagger was upset because she wanted him to come home now, but we want to make sure the neutering is done before we head to Louisiana and we were lucky to get an appointment as fast as we did. So he’s still there. We’re expecting a call sometime this morning to let us know he’s ready to be picked up…and so we wait.

Hubby signed up for Facebook – he finally caved into the pressure from his friends and colleagues, so he’s joined us on the other side. But that also means that now that I accepted his friend invite I’ll probably have to be careful when I post about him….meh, not so much, maybe he’ll learn a thing or two by actually reading my blog. Time will tell.

Every time I run the tractor around the Back 40 and catch this in my peripheral vision, I think there’s someone standing there watching me: 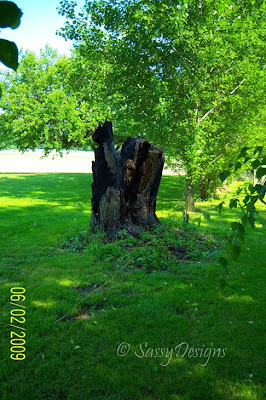 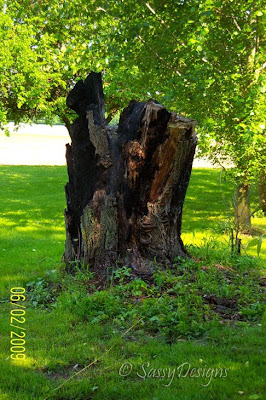 It was a dead weeping willow – our neighbor kindly removed all the branches from it to use as firewood, then started randomly pouring flammables on it and lighting…so far this is what’s left.

Good news! The friends we’re going to be visiting in Louisiana finally joined the 21st Century and got broadband internet and iPhones – so we won’t be cut off from the outside world after all! I won’t have to suffer withdrawals and I’ll be able to post while we’re enjoying our time – I’m sure I’ll have some funny blog fodder coming my way… 😉 Of course I’ll have to make sure I limit my online time because I don’t want to be rude to our hosts. But it’s nice to know I won’t have to kick it cold turkey for two weeks.

One of these days I’m going to get caught up on my blog-hopping and commenting…it’ll happen when you least expect it….then I won’t know what to do with myself when I don’t have 50 tabs open in my browser. I’m sure I’ll think of something. 😉

Feeling Random? Then head on over to the Un-Mom for some awesome randomness. Give yourself a break today and join in the fun…find out if she’s still feuding with Mr. Linky, and if she is, be sure to leave your post link in the comments so everyone can stop by for a random visit. I sure hope she’s made nice with Mr. Linky, though, sure makes it easier to blog-hop and check out all the randomness – at least easier from a lazy don’t-want-to-cut-and-paste standpoint that is. 😉